Bugger! I told you these trails are rocky and washboarded! The original fender support bracket snapped, taking the headlamp with it.

While down in Yuma, Arizona, I was barreling down a rocky trail at speed when the Aurora’s headlamp tried to bail out. Fortunately, it was held by its power cord and I stopped before it could get sucked into anything. With its own bracket bolted to the original front fender bracket, the poor thing spent its life wobbling up and down on each little bump. The fender bracket coating makes it feel like plastic, but it looks and hefts like aluminum at the break. All that constant flexing induced fatigue, and she let go when she’d finally had enough.

Keeping the fender support bracket was simply the easiest thing to do after the front fender itself abandoned ship while the Mighty Furd was carting the Aurora sideways at
the front bumper, doing 60 or so. Just as well – the front fender was merely a styling piece that didn’t actually do anything, and I didn’t personally care for its appearance.

The bracket mounted directly to the headlamp is steel, and I took the “L” bend out of it with pliers.

So, I dedicated myself to put in the ten minutes or so that it would take to mount the headlamp bracket directly to the bottom of the headset, as God intended. The headlamp mounting bracket is steel, and it will take some doing to flex fatigue that. Fortunately for me, the thing is dimensioned such that turning it from an “L” bracket into a flat bracket places it right where it needs to be, and the end-most hole is already the right size for the screw that will hold it to the headset. 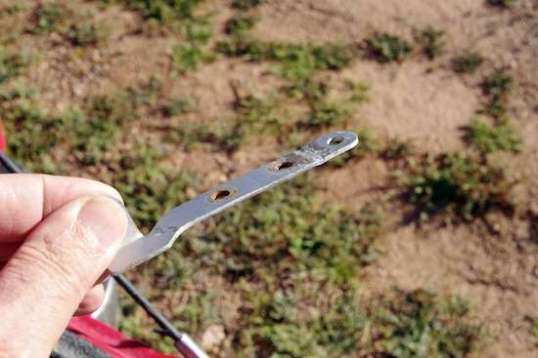 Umm, the elbow was flattened by using a ball peen hammer and a big flat rock. Not pretty, but good enough for who it’s for.

The only caveat is that the bottom of the headset isn’t a flat with a small threaded hole for the screw. It’s a hollow tube, offering no support at all for the bracket. The part that accepts the threaded screw is way up in there somewhere. Fortunately, my Random Box O’ Parts included just one flatwasher just big enough to lay over the hole. It’s own centerhole was too small for the screw, but that was easily drilled larger. Bang, it was just too easy, and the headset screw now has a better grip on the flattened headlamp bracket than it did on the fender bracket.

The bottom of the headset has a gaping hole, so this washer I just happened to have, needed to be drilled out larger for the headset screw.

I suppose that all of this is notable because the Aurora’s LED headlamp is a definite keeper. That’s not just because it runs off the e-bike’s main battery, but because it is a pretty good lamp for navigating the utter darkness of the outback at speed. I wouldn’t change a thing except maybe how it’s mounted to that ridiculous vestigial fender. Then again, most Aurora owners don’t pound the crap out of their rides. I suppose some townie might object that it doesn’t throw a scalding beam down a lighted street, but no further illumination is needed for that. All I can say is, when you’re trying to pick your way back to your campsite from town well after sunset, the Aurora’s head-and-tail lighting setup is surprisingly effective. It’s good for at least 10 MPH on trail, and whatever you can muster on pavement, where the hazards are fewer. 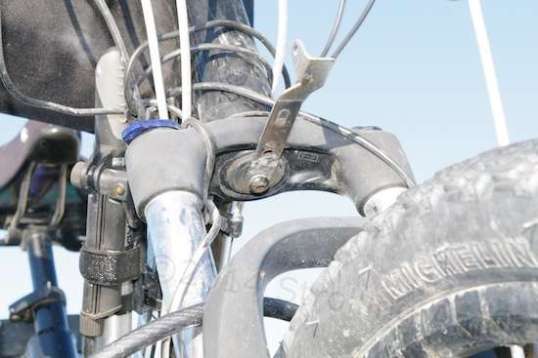 With the washer now plugging the mini-cavern, the headlamp bracket now has something sturdy to be pulled tight to.

Putting the headlamp back into action means freedom of choice out here. I no longer need to skulk back to camp before the sun sets, which means that events in downtown Wickenburg no longer need to be weeded out for when they start and end. Steer roping starts at 6 PM? No problem. The bike stays viable as an alternative to the expenses of running the Mighty Furd, and this was a damper even in my brief return stay in Quartzsite, before I left for here. 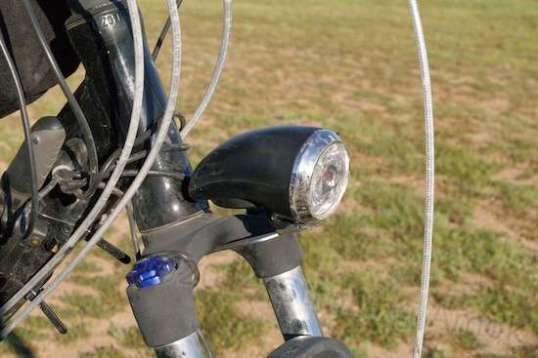 By the way, I’ve done quite a bit of goofing with the handlebar and seat while in Yuma, and will post those mods soon. I finally got the true upright pedaling position I need, and am building a page on this site with every stinkin’ part (with sources, and why) that I’ve swapped out to make the “commuter” Aurora a real trooper in the rugged outback – and for not that much additional money. If you’re curious about their model line, you can visit it here. Should you be the impulsive type, you can get $100 off by simply using the code “StrollingAmok”. That will help if they don’t already have a sale going, which they often do. As e-bikes go, I still wouldn’t trade my Evelo for anything. Under that stylish dilettante aura lies a relentless transport appliance.