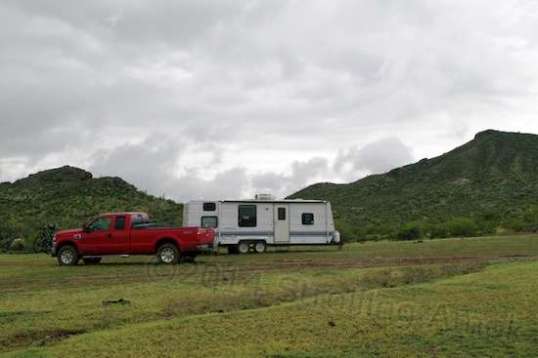 Rain or shine, it hardly matters. It’s a pretty area.

The trip up from broiling Quartzsite was uneventful and beautiful along Route 60, one of many decent rural two-lanes that criss-cross Arizona. The state has what is called State Trust land, which comprises a large percentage of Arizona’s total acreage. State Trust land is distinct from federal BLM land in that it is land leased to various businesses and industries in order to raise money for the state’s schools and other programs. Rather than being public land, it is essentially private. 14-day, $15 passes are available to camp and use very limited, specific areas.

I’m encamped on one of those areas now, just south of Wickenburg itself. Wickenburg has strong historical roots in cattle raising, and as you may know from my posts a year ago, the equestrian arts in regard to

cattle ranches still flourish there. Roping contests and competitions are rampant at this time of year. As a place to boondock or just plain hang out, Wickenburg is a hoot. 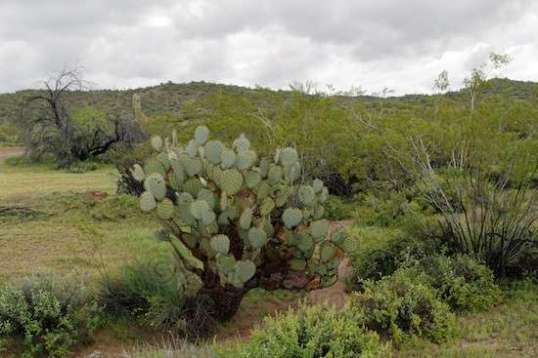 This is beside the trail heading out.

At any rate, I arrived just before overnight rains moved in, and today has already backed off the 70-degree high that the storms brought with them. It may eventually get into the high 80’s later on next week, but for now, it’s cool with no wind to speak of. Predictably, the trail into this area has no road base at all, and the peculiar soil here is slightly soft even when dry. So I was pleased to arrive and set up camp under nice conditions. Normally, I never venture out in wet weather, and stay put for the day or two that it takes to firm the soil up again. It’s just a bad idea to tear things up in the campground and rut the road coming in, not to mention risk getting stuck.

With a 2WD pickup, this is enough to get you stuck. This is slightly downhill, and it still required 4WD.

That was the plan. Then life intervened, and I had to head for town the very next morning. When the ground feels soft on foot, you can be sure that 9,000 pounds of machinery will find it soft, too. I managed to drive a few yards slightly downhill until the truck cleared its own “dry patch” left on the ground. Then it was up to 4WD and the mighty off-road Cooper tires to get it turned around and headed up the grade to get to a defined path. It was no mud bog, but you know things are not great when it takes 4WD just to move downhill. I was a’slippin’ and a’slidin along, keeping herd as the Mighty Furd slowly yawed this way and that down the rocky trail to the charmingly-named Vulture Mine Road. Made it! And I made it back up, tires churning, on the return trip up. That was slightly dicier, since increasing the throttle had little impact on road speed. All those car washes in Yuma are now only a distant memory. I feel bad about ripping up the campground a bit in doing so – I greatly prefer to leave no sign of my presence other than the temporal and majestic silhouette of the Defiant itself, an inspiration to all who gaze upon her. Sure.

Oh man, I hate when this happens. This isn’t a 4WD adventure area!

I’d been letting the consideration soak in the back of my mind as to whether four-wheel drive is really needed that often out West. And the answer today finally floated up: No, except when you can’t wait to leave camp when things dry out a day later. Or when you get yourself into a soft, dry spot left by a wash or other water-flow area. Or when you’re towing a heavy trailer through a new road construction area down here. See, 4WD carries the penalties of cost, worse fuel mileage, weight, and long-term durability. But when you need it to get you to point B, it will prove essential every great now and then.

And this is the trail out. Looks like a simple cruise, but it was a bit squirrely. I’ve seen worse, but never had the misfortune to have to drive worse.

Part of why this particular area is charming in that it was at one time a small cattle ranch or feed lot. Its deterioration made me think that it may have been in operation at the turn of the last century, but two concrete bases for wood gate posts told the truth: 1941. Tall steel stakes outline several pens and hold the barbed wire, but thin wood sticks were added to reinforce the visual aspect of a barrier. Wood chutes and loading ramps made from 2x6s round out the pens. The original entry from the paved highway is much too abrupt for a loaded truck, showing that whenever the nice wide two-lane went in, the ranch had already ceased operation. This entry road goes right on through to where the Defiant is parked and then wanders off between the tall hills. 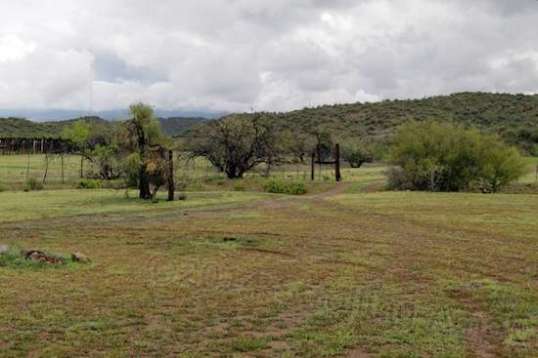 The overall “back” entrance to the pen area.

There’s plenty of fencing around Wickenburg, but there’s still open range, too. Cattle and calves still wander the quarter-mile wide washes in small herds, as I saw yesterday just before returning to camp for supper. Wickenburg promotes the touristy aspect of “real life” cowboys and cattle in its promotions, but once out of the old downtown, the truth is that it isn’t all history yet. It’s still kickin’.

One of the gateposts to the back entrance. 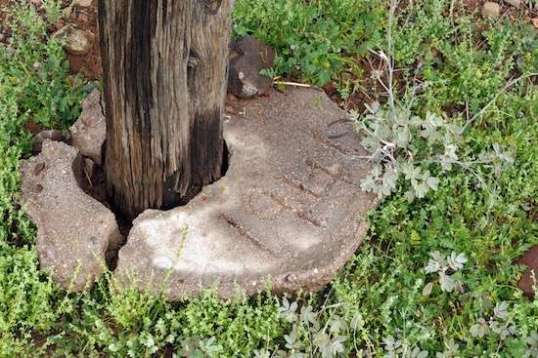 The other mount opposite just says 1941.

Looking out from the pen area shows the rear gate and Mighty Defiant.

Some gates were hinged wood, and some were barbed wire and a stick.

I figure the added sticks were just to convince the cows that there were no openings to squeeze through. They wouldn’t be there if they hadn’t proved needed. 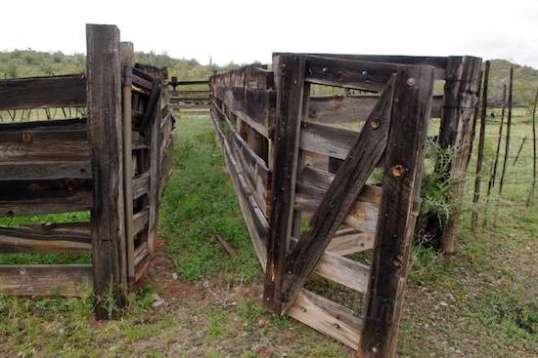 75 years of exposure does things to raw wood.

“The red zone is for loading and unloading only…” 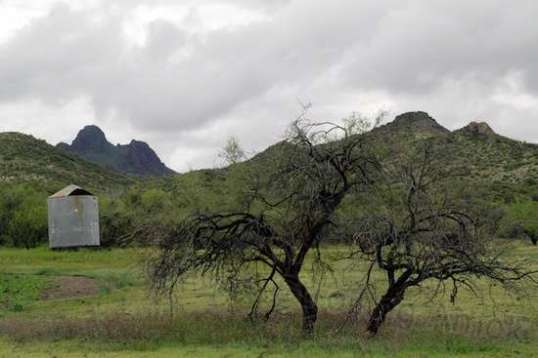 Likely created by the rancher.

The pen area entrance is now an impractical jump up from the road’s shoulder. 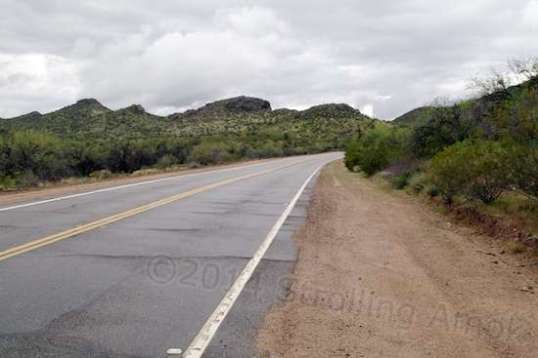 This is the highway that the entrance abuts. No doubt it was once a trail, then a wider trail. Now it’s an ample two-lane with wide, groomed shoulders.

Just gazing southeast from the trailer. Relaxing beauty does not require the sun.