Are We Marooned Yet? 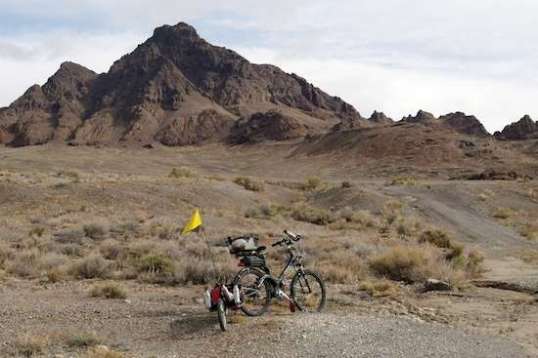 In general, the water running down vast slopes collected and concentrated in flow so that few side trails were left untouched. This shot is taken at a point up Leppy Pass’ long upward climb, and was possible for me only because of the bike’s electric motor to help me get up there.

I took the Aurora e-bike out on a trash run this morning to have a look around the area, looking at the end effects when weather has its way with desert that has miserably sparse ground cover. 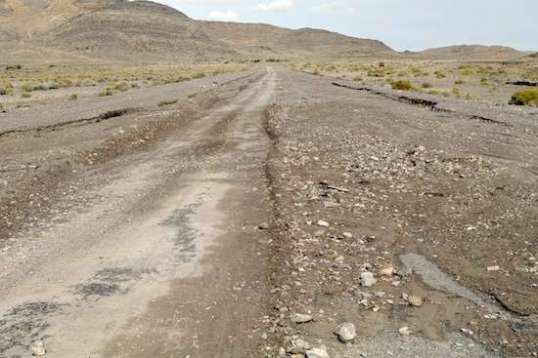 I’m standing on Leppy Pass Road looking uphill. It’s a nice paved two-lane, and I suppose still is, under all the mud and rocks that charged down along it and across it during the rainstorm.

It turns out that the recent rainstorms were about as destructive as they were last year, but Leppy Road’s shoulders were in better shape to start with, and suffered less spectacularly as a result. If you’ve suffered through this blog for long, you’ll recall that last year, a deep new gully did its best to swallow a road grader. There is now one section carved down about four feet deep, but it’s quite short. My trail branches to intersect Leppy Road at two points, and both junctions are damaged enough that a mindless exit would, at best, firmly ground out the low-slung Defiant. At worst, the Mighty Furd itself would be at some risk, even running solo. But by picking exact paths carefully, both exits are technically still in action, for now.

This is looking down the same grade, from fairly near the top. Although this is Sunday, some kind of smaller vehicle with a blade has already cut down a path to the pavement.

One more good gusher would likely complete the job though, closing off both exits. A prudent man would leave now, since the BLM is on its own repair schedule, and another significant rain is hard to predict. That prudent man isn’t here, though. I’m the denser, more stubborn man, so I’m staying put. Apart from more sprinkles due in soon, this campsite is finally just the way I like ’em: cool, pleasant, scenic, and relatively bug-free.

This used to be one smooth dirt blend from the raised area on the right, to the pavement on the left. Most of the entire shoulder’s length now looks like this, except where it created its own new wash as it dived away from the higher points of the roadway.

With the bike parked uphill at the primary exit for Silver Mountain Bypass, my trail, the result downstream is pronounced.

Closer to the intersection. Mind you, this was all nicely filled in prior to the storms. That one cut area is between three and four feet deep.

Here I’m standing on Leppy Pass and looking at the good part of the Silver Mountain Byway intersection. This is easily done with the trailer, as long as I’m willing to only turn right to go all the way up Leppy Pass, and then look for a place to turn around to head back toward I-80. The area to the right in this photo has a deep gully and is a real problem. Leppy’s shoulder damage on the other side prevents a hard left turn.

Leppy Pass’ shoulder at the secondary exit, which meets it at a 45-degree angle. The bike is parked along this exit road. Almost unnoticeable in the truck. this area would ground the trailer’s skid plates, at best, as it crossed. Doesn’t look like it in the photo, but on foot, yup. And I’ve grounded it in places I thought it would clear, so if anything, I tend to be optimistic on this kind of thing. 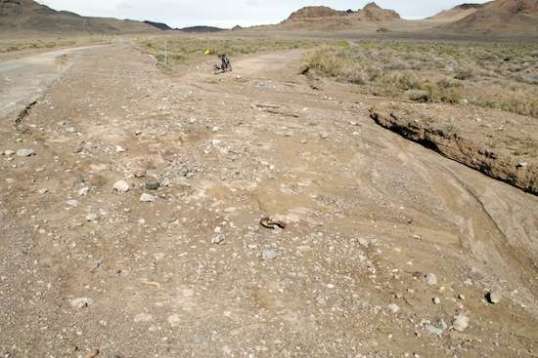 This photo is a little more intelligible. Leppy is on the left, the secondary is on the right. At the moment, the only way for the trailer to make this easily is to hug the water-carved border on the right, stay along it, and then lurch up onto the pavement. Still bumpy, but do-able. 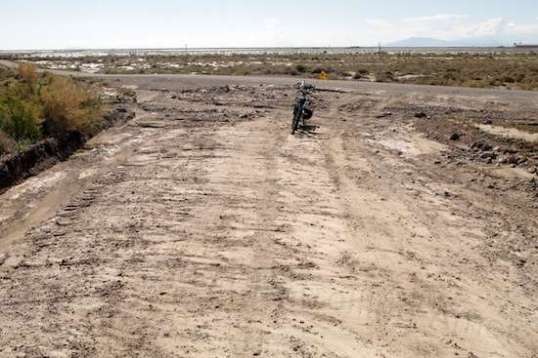 Same intersection from another direction, bike in the same place. Gee, it just looks like I could motor the rig right out there, doesn’t it? Nope. Either hug the left and run parallel to ease it up, or ground it solid and flex the chassis rails, at best.

I’ve been enjoying a recent road grader pass along the Byway, my trail to camp. That’s been readjusted by all the water forcing its way across yesterday, turning it into periodic washboard. Still, it’s a lot better than some trails!