Rusty vehicles are scarce down here.

Now, I really can’t pass judgement on a vehicle for sale any more. I wouldn’t know if it’s a rip-off or a steal. All I know is that I was leaving a local farm stand just outside Yuma and spotted this SUV for sale by its owner. With my interest in vintage iron and mods to same, this held my interest after the pretty blue paint initially caught it. Here’s the sign: 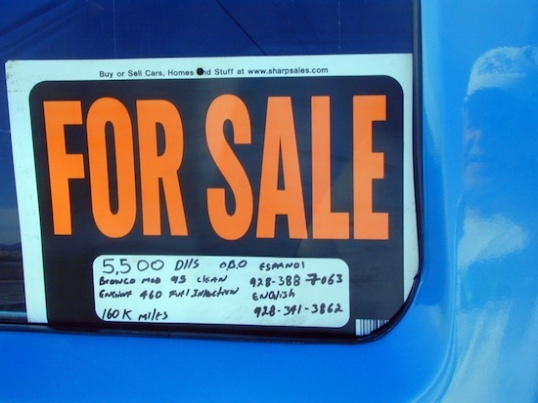 Interpretation of For Sale signs is sometimes needed.

Now, I’m assuming that “dlls” is dollars, as in $5,500. Ordinarily, $5,500 for a 19-year-old SUV with 160,000 miles on it would earn finger gestures, but this Ford Bronco is apparently stuffed with 460 cubes of go-power, which in my mind raises more questions than it answers. A fuel-injected 460 is a lot brighter than a carburetted one, and makes me wonder what vehicle the engine came out of. From my experience, a 460 can produce a large heap of torque. Torque and shock is what breaks driveline parts, not horsepower, so what transmission is used, and what driveshafts and axles? Are they up to it?

Some states do not require rear bumpers, and owners opt for the plain panels, or swap them in for a cleaner appearance.

Overall, this tub appeals. Clean, apparently straight and rust-free, such an SUV beside the road in Illinois would be a true rarity. 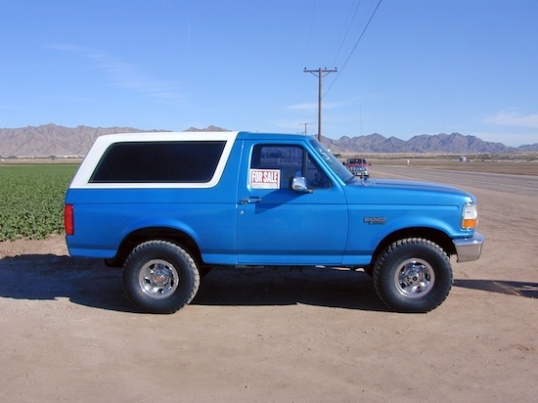 I didn’t zoom in on this one so you can get an idea of the area surrounding Yuma to the north. It’s simply a very large grid of crop fields.

The next valid question is of course: what does it need? What’s ailing on it? What is waiting to be fixed? Fortunately, I don’t care. I don’t have any need for it or any money for such things, and can simply enjoy knowing that some guy executed such an interesting combination of parts. It’s very well done.

The farmer’s stand is in the back there.

By the way, the farmer’s stand that I’m ignoring in this post is quite something, and they do a brisk business because a large percentage of what they offer is local, and some of that is organically grown. The selection is surprisingly wide, and although prices are often no better than or even costlier than the nearby Fry’s mega-grocery, the produce is noticeably fresher overall. It just feels better buying produce at the stand. It’s a more satisfying experience. That either has to do with my natural reluctance to feed the corporate beast that now controls our federal government, or perhaps that it just feels better to buy and get better value from a hardworking and enterprising farm family. Felt good being there, where I was able to buy locally-grown unprocessed dates and some figs – neither of which is currently available at Fry’s in any form at any price!

I couldn’t help but observe the difference in staff. Fry’s produce dept employees were always willing to answer questions, but were mainly occupied with restocking at a frenzied pace. They always appeared to be under the gun and struggling to keep up. The folks at the market were very social and unobtrusively asked to help their customers find what they wanted. They offered choices, pointed out items and alternatives, and everything was at an unhurried, conversational pace. Although they did a steady business, they didn’t have to prioritize restocking at all. Their emphasis was helping people. Their labor cost per pound of produce was astronomical compared to Fry’s, but that wasn’t a priority, and it was obvious what was.