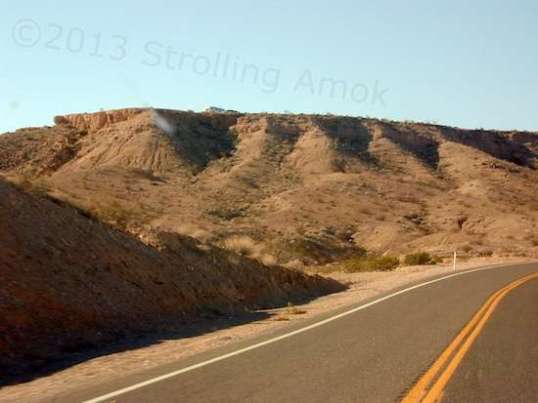 Passing “Snowbird Mesa” just south of Overton. See the camper up there?

I began the trip toward Quartzsite with an “oopsie!”  The GPS wanted me to continue south through some beautiful, winding terrain. I passed a mesa clogged with boondocking campers, and then came up to the Lake Mead entrance, which was blockaded due to the shutdown. The GPS showed no interest in the single road going to the right, so I doubled back and lost three gallons of fuel in getting to I-15 heading for Las Vegas. I did put Lake Mead on my list of places to camp in, however. With Overton so close, that mesa would be a fab place to boondock. 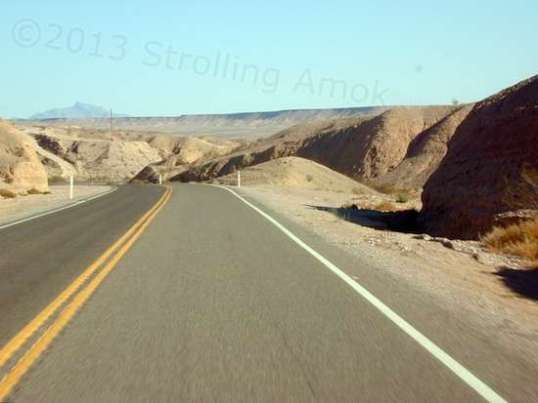 Still near Lake Mead, the landscape is right there near you.

US 95, running along California’s border with Arizona, is a throwback to the days of what highway travel used to be like 50 years ago. Unlike more modern roadways that are carved into the terrain, the southern part of two-lane 95 follows every rise and fall of whatever it’s laid over. It’s no longer claustrophobically narrow like old Route 66 was, but there isn’t that much to pull over on if trouble hits, either. If you were doing well over 100, it would make for some nice whoop-de-doos. The pavement is in superb shape, and it’s been modernized with emergency phones every few miles. The best policy though, is simply to stay on the pavement and drive a reliable vehicle. Given that, it’s suddenly 1960! 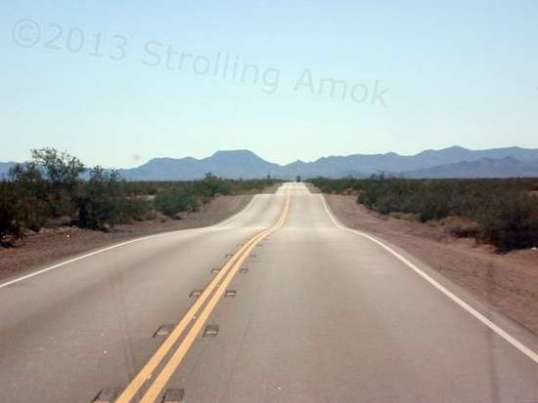 This is a tamer section of US 95, being just one rise and fall after another.

It’s hard to describe, but the feeling of it is very different. In an Interstate, you’re not involved with what’s around you. 90% of the time, the road requires nothing of you. Just set it on cruise and turn up the entertainment center to keep from being bored. On more historic roads like US 95, you are fully involved with the landscape. You’re in it, baby! No texting your friends here! You watch the max speed signs on the mountain curves, do what you can speed-wise, and have to use good judgement, particularly when passing slower vehicles. These days, I’ve had a chance to see that many people are surprisingly bad at it. They’re so used to auto-everything that, even with today’s much, much quicker cars, the concept of rapid closing speeds and hazardous places to pass seem like foreign things. It’s pretty obvious when a car driver isn’t used to having to be a motorist, and it tends to cause the guy in the opposing lane some needless excitement. Done right, passing is a safe no-brainer, and is almost boring. Done wrong, it tempts Darwin’s Law.

Once you make the cut over to Parker, AZ on 62, it’s a quick jaunt down AZ 95 to Quartzsite. I’m starting to like the backroads way of getting places. They can’t match the getting there nature of Interstates, but they do have their own charm for people who like to drive and experience the trip. They are memorable.