A Change of Plan!

Head ’em up, move ’em out! Club organizers give up and break camp…for now.

It rained again last night, some 3/4-inches I’m told. The above photo was taken at the Speedway entry point, where club organizers have been camped for longer than I have. The good fortune in this for me was that I arduously biked the sweaty 5-1/2 miles against a headwind to get there just in time. I was out for “a little exercise” and found that the published distance was shorter than reality. Wheeze. If I’d been 2 minutes later, I’d have never been informed by the group that they were giving up for now, but had the flexibility to reschedule again for this coming Thursday Sept 19th. Hey, I can do that! And, I’ll save fuel money by being planted in one spot until the BLM throws me out! From Monday on, it should be nothing but sun, so it has a chance. All this is really funky, because driving past the Great Salt Lake in Salt Lake City showed it to be well on its way to drying up.

You may not be able to see it, but dead center in this picture is the tire they’d originally placed on the shoreline. It’s now nearly submerged. That’s not good.

While I was staying in Marengo, some guy in a biplane was practicing aerobatics overhead nearly every afternoon. Here near Wendover, a couple of fighter jets fly around at a very considerable speed several times a day!

Actually, these guys are way, way up there!

At first I’d jump out of the trailer and look around, unable to find them, since they are usually up in cloud cover, and the mountains all around reflect the sound.  I didn’t really listen at first, and knew there was a private airport in town, but they certainly don’t support airliners.  Then I noticed that it didn’t sound like an airliner. It was louder, and the sound seemed to go loud and soft rapidly, and bounce off different surfaces. How could it be so high and yet so loud? Not annoying. Just loud. Finally spotted them today.

Well, you can’t really see it, but here’s the trailer again, as viewed from the Speedway entry point with a 300mm telephoto. If you can discern two light-color blobs at center, the Enterprise is on the right with the Furd parked beside it. No wonder I’m a little tired. 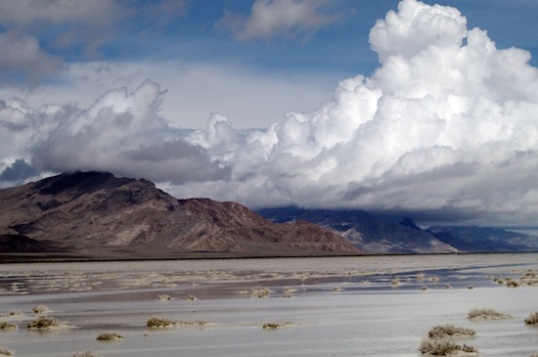 Just can’t get enough of the mountains and sky here.

Here’s the money shot of the group, with the pattern of light and shadow caused by the clouds overhead.

And one last photo I took from my campsite, which will become a familiar sight as I hang around to catch the Top Speed Shootout, Edition 2.