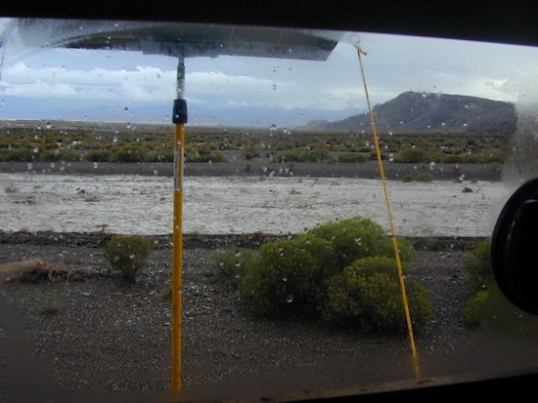 Things were interesting early in the evening yesterday. I’m hoping that they don’t get even more interesting this afternoon. I was cooking pasta for supper yesterday after a heavy, high-wind thunderstorm and heard a faint fan-like hiss. That made me wonder if I’d left some electrical circuit on, and something was running that shouldn’t be. Hmm, nope. After a while of wondering, I looked out through the foggy window and spotted what appeared to be the paved road near the trailer moving downhill. Huh? A couple of wipes to the window showed it to be a cascade of water from the mountain slopes surging along in waves, carrying rocks and debris along with it. It was moving with enough depth and speed that I was concerned that it might breach the deep gullies on each side of the road, or that a separate stream might be forming on the ground approaching the truck and trailer. No, some typical rivulets were forming, but that’s about it. And the berms were holding.

It seems that the two deep gullies were carrying stormwater down from the slopes, and that the road beside the trailer just happened to have a bit less crown than usual, so the two streams temporarily joined there and delivered a goodly mix of gravel and hefty-sized rocks on the pavement. It was over in minutes, but not before reshaping the gullies. Some areas are shallower, and some, like at the entry to my campsite, are deeper. Further down, it’s cavernous. That wouldn’t pose a big problem once the soft dirt dries out. Part of the entry is still negotiable by the trailer, if I’m willing to turn in the wrong direction and go up the long slope to a turnaround area up there.

The issue is that it’s been raining steadily for the last hour (9 AM) while the weather forecast says that it’s mostly cloudy right now with an 8% chance of rain. Thanks. More thunderstorms are predicted for 2 PM and 8 PM today before the long run of sun begins. My primary concern is that another similar gully-washer may overflow the banks of the roadway, since the gullies are now shallower because of all the debris. I’d like to keep the truck and trailer uninvolved, naturally. Though close to the roadway, I’m also on the highest ground in my little area, so there’s no point in shifting things around. My second concern is the entry area. Once dry, the Ford can easily makes its own nearly anywhere. The trailer is another matter entirely. BLM roadway maintenance is typically glacial (though there is a facility at the top of the slope a few miles away), and I may need to either improvise my own new exit point with my small shovel, or repair the existing entry. But that’s for the future – the Tankmin eliminates the need to move the camper until an exit has been created, so the usual crises of water, waste and food are not an issue and shouldn’t be. Adventure!

Mud and rocks merged across the roadway, and some rocks are the size of two softballs, so drivers have to use care in getting through.

The entry to this area is ruined, allowing only a right turn exit when a trailer is attached. Gonna need a little work!

And more rain on the way! Life inside the Enterprise is just fine during long spates of wet weather, but some sunshine will be nice. Change of pace, you know?

Epilogue: One of the guys from the maintenance crew up the mountain drove through the rocks to get to work, and just appeared with a road grader. Once he scraped the pavement clear, he took it back up to the facility. Working on a Saturday? Whether they try to repair the gullies (and entry) once things have dried out is anyone’s guess. It can’t be done now, or it’d get stuck.