View from the rear: one bolt removed, and the other stripped and locked in place.

The skids on the rear of the trailer have been a problem. In use, they have shifted up on the “V” of the angle iron they’re mounted to, allowing the tip of the iron strap to contact the ground directly. That’s tough on the strap, and will soon result in an unusable skid. The cause is that the wheel assemblies were mounted on the rearmost angle of the strap, causing them to shift back and up, out of the way. Given a spindly 3/8″ bolt with a locknut, the bolts bent easily from the side load applied to them.

One bolt was removable, while the other rusted in place and snapped off when torque was applied.

A fix was needed. Either that, or use the grinder to take the entire contraption off completely and let the bumper take a beating. As far as a fix was concerned, it was made more difficult in that the pair of bolts on each bracket were badly bent from the sideways force applied to them. Bolts aren’t made for that. With the help of a high-speed grinder, Kroil penetrating oil and Vise-Grips, the bolts were removed. I decided that maybe less bolt-bending would occur if I mounted the brackets on the forward side of the “V”, and used thick bushings to help the bolts resist a side load. 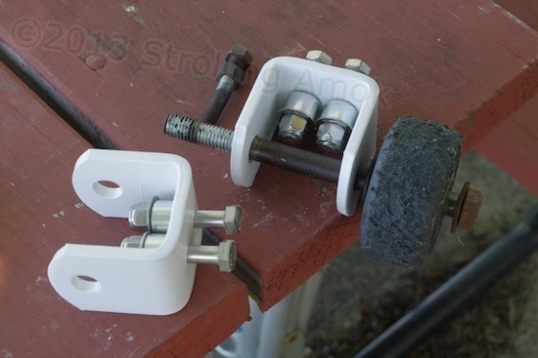 Instead of a bolt threading into the bracket and extending unsupported to the strap, I drilled out the treaded holes and rigged up bushings and lock nuts to keep them supported against side loads.

I can write in deatail about how brilliant a solution this is: bolt-bending should be a thing of the past, and the wheels should now stay put on any forward movement. But really, it’s all mere theory until the trailer grounds out against the revamped skids in the real world. Might work. Might not. With just 10″ ground clearance on a 9′ overhang, I’m certainly going to find out!

P.S. The Kroil penetrant from Kano Labs works much more effectively than WD-40 on rusted, frozen parts. It’s available only from Kano or from vendors on the Internet. Use WD-40 when you can. When the going gets tough, Kroil is worth the effort to get.