Spending My Days How? 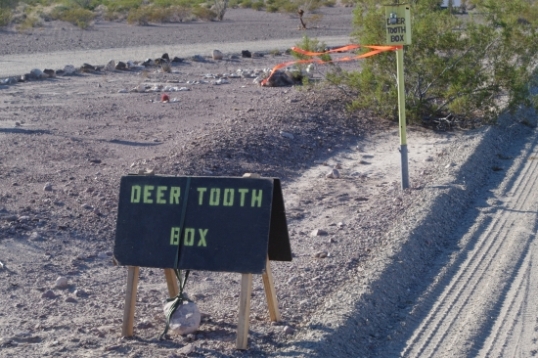 This “deer tooth box” and sign were at the entrance to the bad road to Queen Canyon. What’s up with that????

I was asked a fair question, as in: “What’re you doing right now? How do you spend your days?”

The answer to what I’m doing these days is quite a bit different than it will be a couple of weeks from now. Basically, I’m getting the travel trailer’s basic systems up and running, and checking on how well they’re doing. I’m merely continuing the modification process that I started in September and didn’t have the good fortune to complete by the time I left Algonquin, Illinois for Quartzsite, Arizona. This is doing it the hard way.

My day is spent poring over installation manuals, calling vendors with questions, doing Internet research, and making to-do lists as well as shopping lists for bits and pieces of hardware. Making a mistake now in selection or installation out here costs significant time and money. You pay more for problems.

Today specifically? I checked out the feasibility of

running the CPAP off of a smaller solar panel with a cheaper controller, which would free up one more existing big panel to throw toward the office battery pack and ensure that it stays fully charged. Important technical-type stuff. I ultimately decided that this need could be could be covered by simply hooking up wiring plugs differently, depending on need – the existing solar hookups allow me to easily swap around solar power to where it’s needed most, and so nothing new is actually required. This is a good thing, because my up-front capital costs have already exceeded my budget! Thankfully, I’m just about done spending money on the trailer. It’s pretty easy to be nickel and dimed to death, too.

After window shopping at the local solar place for info, I hit the grocery store, such as you may choose to call it. There is no real grocery in Quartzsite. These places are more like 7-11s on steroids. Selection is very limited, and prices range from “not that bad” to “maybe I can wait”. The only operating franchise I’m found is a McDonalds. If you want a better selection, you have to head for Parker, 36 miles and 45 minutes away. That equates to about 6 gallons and $25 away, so saving money on groceries can’t be the prime motivation.

I then hit the hardware store for fresh and waste hose fitting adapters, plus a small tarp that I can wrap around the driver’s side tires to block the sun. Rolling helps keep tires from aging and cracking, while sitting in the sun does not. The end result looks trashy, but it works. A second food store had to be visited since I was completely out of fine liquors, namely the cheapest gin and vodka I could find. I was impressed that one can also select generously-sized bottles of “grain alcohol”. White Lightnin’? I expected a young Burt Reynolds to come skidding in with a ’72 Ford Galaxie with a “built” motor.

I then called an authorized Apple service facility in Phoenix, because Apple sent me an e-mail saying that the particular Seagate hard drive it has has experienced too high a failure rate to suit them, and they want to replace it even though A) mine hasn’t failed, and B) my warranty just ran out last Friday. The service place, a third party, has an approved drive in stock and has me booked in for early tomorrow morning. They’ll try hard to get it out by the end of the day, including restoring all the data now on the original drive, at no charge. This last part is their offering, as Apple doesn’t include it. I’ve replace many hard drives before, but the iMac is unusual in that everything is packed into the monitor. That big monitor has a glass face and a one-piece wraparound back, so the only way to get it open is to use suction cups on the glass and who-knows-what on the back to pull it apart. I view getting a new hard drive free in a three-year-old computer as a great thing, although the $75+ fuel cost to get there and back dampens my glee a tad.

Then I sat for a little while in the shade to look at the hills surrounding the campsite. Beautiful.

Until all the solar systems are in full service, such will be my days. Researching, installing, shorting out critical wiring, and sweating the details. After that, I’ll be able to put the office back together, put things in workable order, go through three pounds of receipts to get a clue as to how much financial trouble I’m in, start researching more traditional That’s Obsolete articles, and look through those cookbooks my daughter gave me, for possibilities so simple that perhaps even a man could make them. I got boiling water nailed! I will also visit a few more spots to write about, though this must be done in moderation. After all, this is an experiment in extremely tight-budget living at this time, not a vacation and travel binge, and the F-250 is not a VW Jetta diesel.