Tuesday, October 23rd was my first full day of touring the Petrified Forest National Park. I’ve mentioned the driving views from the road that goes through the park. Maybe it’s the economic depression that we don’t officially have, but not many people are at the park these days. I’m told that the prime season ended in September. At any rate, traffic along the roadway is almost nonexistent. For the sake of really taking in the scenery, that’s good, because there are very few places to stop at roadside, since there’s no room for a gravel shoulder. When you want to stop and gawk or take a holiday snap, you have to barely drop two wheels off, or just stop as-is. Either way, you’re blocking your lane. With no one in sight for several minutes, this is not an imposition.

But the view is always worth the stop, however awkward. I’m just going to paste a few pics here, but take note that the park road contains much, much better – they were located in a potentially dangerous

section of roadway as it wound tightly up and down between badlands hills. With no place to stop safely, I have the memories, but no photos.

Below is a closeup of the one above. The badlands areas are fascinating because they challenge our sense of scale. The mounds and gullies often look like an aircraft view of mountains and valleys, even up close. An HO-scale model railroader would go nuts in here.

This is why it seems an absurdity to me to try to blow through this park in an hour and then say, “Yeah, been there.” Safe or unsafe, you have to stop. 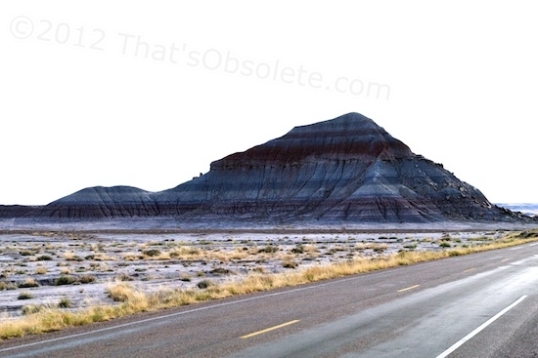 During the day, I headed nearly all the way up to the north end of the park to see where old Route 66 went through. The road wasn’t there any more, but the telephone poles were.

This is where old Route 66 passed through the park.

A railroad still passes through near the location of the old highway. The Park claims not to have torn out the highway, which despite appearances is so because the unused power poles are still there. I have no idea of whether this section of 66 was ever paved, so it’s possible that it was simply grown over, but I would have expected to see some remnants asphalt.

An early Ford perched on cinder blocks commemorates the location of the highway.

Actually, this “Mother Road” of song and TV show, had a mother. It was the National Old Trails Highway, also called the Ocean-to-Ocean Highway. It went from New York to Los Angeles, pieced together from parts of the Cumberland Road, Santa Fe Trail, railroad track frontages, ancient American Indian trails, plus some new connecting pieces. So Route 66 was merely the most recent incarnation, taking on sections of various dirt tracks, the N.O.T.H. included. If you were driving through prior to 1926, you wouldn’t be on Route 66, since it hadn’t been commissioned yet. I’m not certain you’d be on the National Old Trails Highway here, either. I suspect that this particular section originated as a railroad track frontage road, because the nearest piece of National Old Trails Highway converted to 66 has been described as starting further westward, at Las Vegas, NM and running to the Pacific.

There’s not much point in being pedantic about it though. Parts of Route 66 were swapped around since its beginning, and trying to retrace the old road in a nostalgic drive can be problematic, and not just because of collapsed bridges, torn up sections, a ton of dead ends, and privately-owned land. In some areas, you face a choice of which of three routes of Route 66 you wish to follow. It ain’t easy because, except for commercial signage inside some towns, none of it is marked in any way, and the original path has frequently been obliterated in order to cross over or act as a frontage road to the Interstate that replaced it. Business is business, and Federal and State DOTs don’t have much of a sense of nostalgia when new construction will provide a better solution than the old.

I can attest that if you think you can discern what’s Old 66 and what isn’t by pavement appearance and direction, you’ll probably guess wrong. I only dabbled with small bits of it a couple of times, when it was handy. Despite having rudimentary documentation onboard, I frequently found myself thinking either, “I can’t believe this isn’t 66 right here, it looks right and makes sense”, or “I can’t believe this is Route 66!?! Narrow, flooded areas, zero shoulder, guardrails right at the pavement edge. This is a glorified cow trail. The directions must be wrong.” But they aren’t.

I suspect that many online Route 66 guides are winging it now and then, but it hardly matters. Nobody, not even me, is going to try to retrace every mile still available, backtracking down 20-mile stretches of unmarked dead ends over and over. Such a painstaking journey would take more months, fuel, patience and money than anyone has. Not to mention the difficulty of having to reverse direction in anything bigger than a car, since there are precious few dead ends with anywhere to turn around nearby. Still, driving a small piece of old 66 here and there is often a fascinating and fun exercise, if you’re in no rush to get somewhere.