Archive for the tag “Polaris Slingshot” 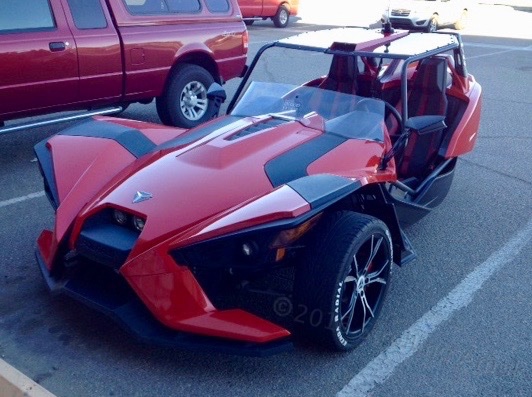 Seeing this parked outside a hardware store raised many questions.

Maybe you’re already aware of the vehicle above, and maybe not. I was not, though I’ve had a kinky attraction to three-wheelers for decades. That’s because Illinois registers them as motorcycles, which lets them avoid all manner of regulatory equipment requirements. The tricky part has always been to control weight distribution and center of gravity such that they don’t go topsy-turvy on you when you go into a corner too fast.

Interesting, no? I suspect this one has had a non-factory roof added to limit driver fry in the hot Yuma sun.

Anyway, I was impressed by the futuristic appearance of this Polaris Slingshot, a vehicle I never imagined that Polaris, an ATV manufacturer, would bring into production. One look at the frame and END_OF_DOCUMENT_TOKEN_TO_BE_REPLACED