Huh? White, branded shock absorbers from a new car dealer? Don’t mind the squiggle at top center – that’s the VIRB’s default display that indicates where you currently are along the recording’s total path. (It has a GPS sensor.) Here, I’m just beginning to head east on a trail.

When the Mighty Furd was having its front suspension rebuilt and new shock absorbers put on, all I looked at were the front shocks, which were easily seen. They’re black. I assumed that the rears were also black, since this set had to be ordered, and Ford won’t put on non-Ford parts that aren’t related to their OEM chain. They of course order a heap of parts from OEM vendors, most of which also sell aftermarket. But the original testing, evaluation and approvals of whatever they specify and order must run the gauntlet in order for Ford to be able to warranty them both as-delivered and as replacement parts. Dealers can of course install nearly anything the customer wants, but if they fail, you then only have recourse via the outfit that made the parts you wanted put on. Ford Motor won’t warranty them.

So here we have Ford-issued no-name shocks in front, and white Rancho shocks in the rear, and Ford Motor warranties them all for their usual two years. So the original black Ford-supplied rears are apparently out of production, and the Rancho-branded shocks are considered to be fully equivalent. This is not particularly surprising, since Ford now sells at least one pickup model wearing Rancho-branded shocks. As I wrote in an earlier post, the performance of this set feels equivalent to what the Mighty Furd was originally delivered with, unlike the Monroe Gas-Magnums that I later replaced them with.

Not being one to leave well enough alone, I was now curious as to what model of Ranchos these rear shocks are. After all, finding that out will in the future enable me to have them replaced with Ranchos all-’round, and more cheaply than having to go to Ford to get them. You can get any model of Rancho anywhere. So I emailed the “RanchoExtreme Team” to ask END_OF_DOCUMENT_TOKEN_TO_BE_REPLACED 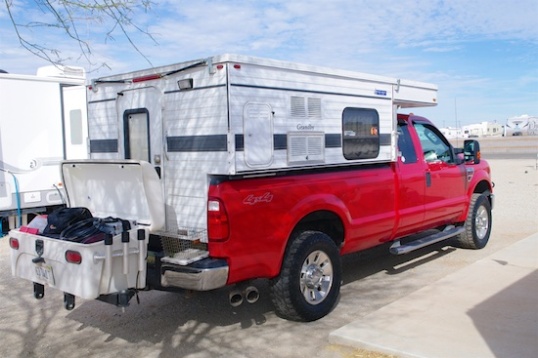 They washed it, and the tires are actually BLACK, not deep grey! The dot inside the cargo box lid is a mini-thermometer so I can monitor interior temps.

Well, among the final prep for departure items on my list is maintenance service that’s due on the Mighty Furd, and I also wanted them to check the front wheel alignment and check the front suspension parts, since the tires have been insistently cupping (wearing in weird and warpy concave patterns). That usually indicates suspension problems, and it’s been going on for a couple of years. The cupping transforms the aggressive Cooper ST/Maxx treads from their normal whine to a sound that closely mimics the harmonics of a blown wheel bearing, just enough to make it unsettling. The maintenance items were to change the coolant (best done every 3 years on this engine), change out the fuel filters (2) along with making sure that the water drain valve isn’t plugged up with sludge, and change the oil and filter. The service writer suggested changing the rear diff oil if not already done, which it has not been, which he said was normally due at 90,000 miles. Naturally, I suspected foul play here to drum up business, but agreed to have that added in. As it turns out, it was due at 100,000 miles and I just reached 105. Missed that one. Total bill when it was all over, $730. I’d suspected $600 going in, not including the diff change, and had braced myself for it. Didn’t stop the hanky from having to come out. The other people in the waiting room understood, but I don’t think the cashier likes to see grown men sobbing into one. She did pat my shoulder and say “There, there, now …Check or credit card?” I suspect she rightfully tagged me as one unlikely to carry that much cash. Ever.

I was in by 7AM and left at about 2:30, the main drag being that you normally don’t want to drop all the coolant out until the motor has cooled down some. I sensed bad news coming when the work was done and the writer was not smiling. He herded me toward where we could sit down. Turns out END_OF_DOCUMENT_TOKEN_TO_BE_REPLACED

Toss a hundred nickels under the hood and, at best, maybe three will make it to the pavement.

The contemplative life offered by solitary travel into unfamiliar places is quite a treat, but it does have its greasy underbelly. Free of rent, mortgages, property taxes and the like, one is free to wander and perhaps gain a new perspective. But some issues aren’t left behind, because you take them with you in order to get to the next place.

Once your mode of travel begins to age, it’s invariably gonna start eating parts and fluids. You have a free and open choice of whether to try to stay ahead of the curve with scheduled maintenance, or wait for the crisis or crises resulting from neglect. But some parts are best left alone until they have expended themselves. Vehicles made within the last twenty years are so much better at delaying the inevitable that even age and wear-related parts can have commendable lifespans. When a component lasts two or three times longer than it once did, that’s money left in the bank. Your bank. Kind of. Okay, sometimes, not so much.

Ever had a radiator hose start leaking because heat, pressure and time got to it? Sure you have. Perhaps you took it in, or perhaps you END_OF_DOCUMENT_TOKEN_TO_BE_REPLACED