Archive for the tag “electric bikes” 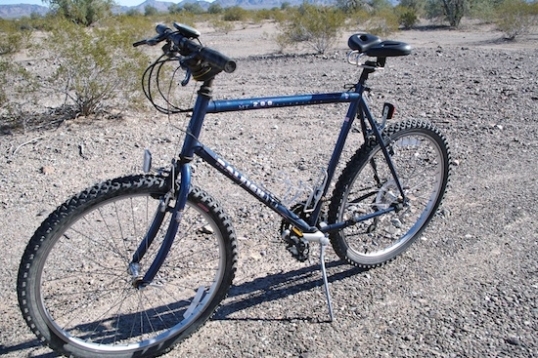 The ol’ Raleigh MT200, with mods that help me stay on it longer.

Well, I’ve been trying to use my 1993 Raleigh MT200 as my pack mule over the last two years, as you may know. The goal is to avoid using the $45,000 Ford diesel pickup for errands and grocery shopping trips, campsite scouting and area exploration. I simply won’t be able to afford to replace it unless I’m willing to give up some other costly activity like, oh, say, eating.

The trouble with using the Raleigh has been that my bad ticker limits my range even on level pavement, and I’ve found precious little of that in my travels. As a result, I’ve had to use the Ford for too many short trips that a bicycle could normally handle, and that kind of driving adds up mileage in short order. This violates the Defiant’s Prime Directive, which is purposed to preserve the vehicle over the long haul, as well as decrease fuel and repair costs to a minimum. It also violates my doctor’s directive to get sustained exercise at controlled levels. For me, daily walking is okay a few times, but then gets monotonous. Something in my DNA wants to cover ground.