Dinosaur tracks, which mean I’m not the first being to walk around in this area.

Yesterday was a bit of an off-day physically, so it was just as well I had decided to stay put an extra day. Didn’t stop me from walking the mile-long Sandal Trail to view the Anasazi ruins in the Betatakin Canyon. Three trails begin behind the Visitor Center, and Sandal Trail is the only one that’s paved and offers such a view.

This is a Navajo hogan. It has a hole at the top to allow a small fire inside when needed. I would think the insulative properties work year-’round.

I rode the e-bike there from camp and, neglecting to bring a lock, decided to walk it beside me. That turned out to be a fortuitous decision, because the trail descends several hundred feet as it wanders along. That posed no problem on the stroll to the viewpoint, but the bike proved invaluable on the return lurch back. After some distance, I lowered the seat and let it carry me along, and the degree of uphill slope in a couple of places was all it could handle in its lowest gear! I still got my exercise aplenty, since I dismounted and walked it each time I encountered others on the trail. That wasn’t only from courtesy, but was for the sake of self-preservation. It’s a narrow trail to ride, with steep drop-offs, and that astonishing sense of balance that I once had on a bike has long since gone the way of all things. Especially when crawling along in low gear. In a situation like this, it’s a bad idea to impose upon anyone, or there might one day be a new sign added in the future about bikes being prohibited. By nature, it’s a walking track, not a cycling trail. By the time I reached the visitor center again, I’d had a pretty good workout. 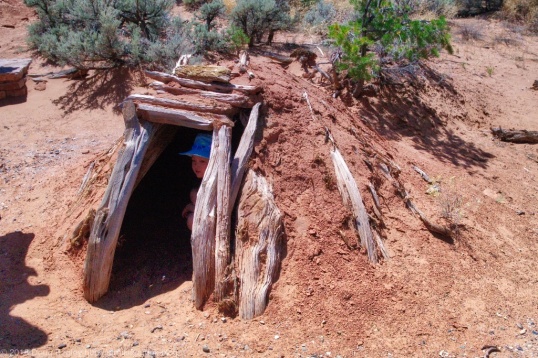 A sign labeled this a sweat house, and it’s tiny. The people carried in heated rocks, and you can figure out the rest. According to a sign, they used it as an alternative to bathing when water was scarce, which it usually was. Here, a small child visiting from China has taken up residence. Don’t let your kids/grandkids see this photo, or they may develop plans for the backyard. “That? Oh, that’s just a Navajo sweatlodge the kids made themselves, but they just use it to camp in and stay cool.”

I then mounted up and headed for Canyon View Campground, the other free camping area here. That road descends a bit too, but it is smoothly paved as well. Once in camp, it changes to smooth gravel. Canyon View is more rough-and-tumble than Sunset View, but there are still restrooms about, and its sites are larger and set apart much more. Surprisingly, it was full, while Sunset View still had plenty of slots open. All in all, a good day. 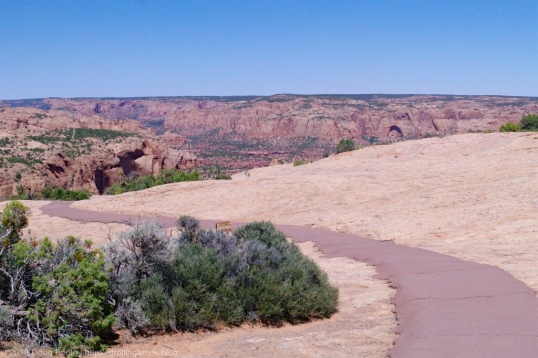 The start of Sandal Trail. Click on any photo for a larger version.

Getting closer to the viewpoint. 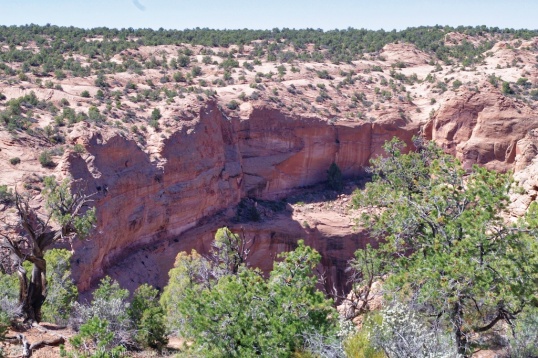 Both sides of the trail can get interesting.

Looking back, I parked my faithful steed a short distance from the viewpoint.

The ruins are hard to discern at this distance, but a pair of binoculars are mounted to a post at the viewpoint. 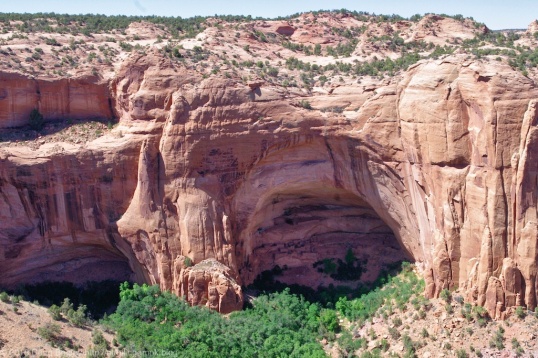 In one spot I could just make out some rectangular blocks scattered on the ground, and I have the feeling that neither Nature nor natives did that. 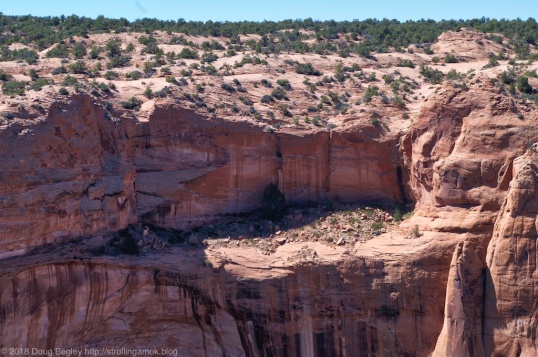 Lots of rubble on a higher level. 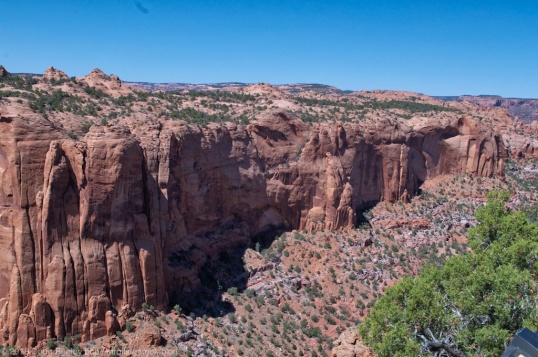 The trail at one point goes over great spans of solid rock.

Here’s where the trip to Canyon View Campground begins.

The road to camp is easy, as long as your bike’s brakes work well. There’s a stop sign intersection at the bottom, so you can ease down or fly, your choice.

A typical campsite. Not too cramped, is it?

Vegetation tends to block the view of the canyon, but at least some sites are claimed to have a good view a short walk away. This was taken from the road through camp. 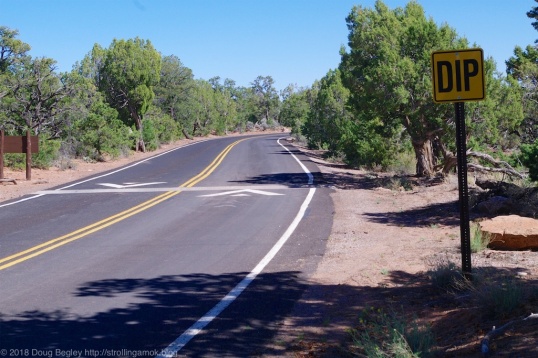 One last but notable caution. The approaches to the Visitor’s Center and then to Canyon View have small signs warning of twin concrete gutters running across the pavement. These are narrow trapezoidal grooves, and it’s best to crawl over them if you like your dental work as it is. Since they don’t appear to be anything notable, they bite worse than they bark.