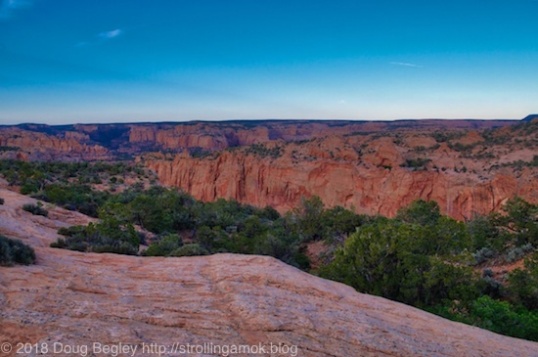 A viewpoint along the road to Sunset View and Canyon View Campgrounds.

Bad start? I was going to drop off the old batteries and get the heck out of Dodge (Flagstaff), but while I was preparing to pack up, my Samlex inverter, a “special” model tolerant of high charge voltages, gave out an audible alarm. Looking at the digital voltage readout showed that system voltage was at 16.7 and climbing. it shouldn’t normally be exceeding 14.4V at full bluster. Not good. I immediately turned off the power to devices, popped the main camper harness switch to protect the fridge and such, and pulled the solar panel fuses to stop charging power. The battery meter slowly dropped to normal.

That was odd. Both solar charge controllers had thrown a red LED to indicate they weren’t happy. Since the ground panels were deployed, I began troubleshooting by reinserting the solar fuses for one and then the other. As it was approaching late morning while bulk charging was still in progress, the 200w ground panels and little Morningstar SunSaver MPPT acted normal, pumping voltage up to 14.3, it’s programmed maximum. Running the big TriStar 45 MPPT with the 300w roof panels instead, quickly pumped voltage up to 17 all by itself. I looked at my connections again to try to look for any mistakes I might have made in installing the new batteries, but found nothing amiss.

Consulting the manual didn’t help much, and as this was to be my departure day, I called Morningstar and pleaded my case to the gatekeeper, who let my call through to a tech guy. That was good, because as of 2014, they are loathe to tie up techs with phone calls and prefer email correspondence. The tech had me pop off the TriStar’s front panel, review my DIP switch settings, and take a few voltage readings off various terminals, which quickly centered on the Battery Sense circuitry as not seeing the true pack voltage for some reason. Battery Sense is nothing but a couple of small gauge wires that make sure that the controller is seeing voltage at the battery instead of at the controller itself. This ignores resistance losses that might be occurring on the long main cable lengths, a handy feature when batteries are not particularly close to the controller.

Long story short, the Battery sense wires were seeing a voltage of 12.3, an oddly low value when the main cables were seeing a resting voltage of 13.5 or so. He mentioned that I might try reconnecting those two wire leads in the same way I had the main cables wired up, so that it would read voltage in the same manner. I had them both connected to just one battery in the stack. If that didn’t correct the problem, I might have a blown Battery Sense circuit, which he said was very rare. That would mean a new $400-$500 controller and a huge delay in acquiring it.

Much of the discussion had involved my cabling layout intended to equalize loads across all batteries, so that one would be less prone to wear out before the others. After hanging up, I unearthed the batteries in both benches again to rediscover how I had wired them together, and thus how the Battery Sense leads should be relocated. The battery that the leads were now connected to had a positive cable that seemed to disappear under a battery box and lead to nowhere. The eyelet on the other end had slipped down out of sight and was connected to nothing, when it was supposed to go to the battery next to it. So the battery of interest was receiving no charge (being no longer part of the pack), the Battery Sense wires were reading this low voltage, and the controller had been properly ramping up voltage to the other three batteries because, as far as it was concerned, all it was seeing was the lonely 12.3V of the isolated battery. Yup, one more instance of feeling like an idiot, but I wouldn’t have worked my way out of it had there not been the puzzler of just why the Battery Sense was not seeing the voltage shown on my main display, which was connected to a battery in the remaining pack of three. I wanted to call the tech back and apologize, but realized that another call through the gatekeeper would hardly be a courtesy. He had helped turn me in the right direction so that I could eventually solve the mystery.

Once hooked up properly, the entire system returned to normal function, and it was now 2 PM. Hmmm. It would take awhile to repack the benches and button everything up, break camp, load the old batteries up and hike them down to Battery Systems in Flagstaff. Then drive the 2-1/2 hours to Sunset View Campground in Utah. I’d be lucky to get there by sunset. Stay an extra day to smooth things out, or go for broke? I decided to live the adventure, and hopefully let the muscular young man at the battery place risk his back getting the old pack out. Getting them in had been no picnic.

The drive from Flagstaff through Tuba toward Kayenta was Hopi and Navaho reservation area, and while being truly picturesque most of the time, it also impressed me how much of it was unusable for any income producing efforts. Wasteland. We really stuck it to them. It got better the further northeast I went, where at least cattle ranching on scrublands was a possibility.

The first half of the trip netted me a solid 22 MPG due to a stout tailwind. That’s impressive, since the best I can hope for is normally 15.5 or so. The second half produced an average of 18, being at more of an angle to the wind, but I’ll take it! The route to the Navaho National Monument is somewhat short of Kayenta, and it surprised me that it was a nicely paved highway. I was expecting the usual gravel road, which is a step up from what I’ve found running through reservations I’ve been through before. Then I hit an overlook with a good canyon view (picture at top). Then a fairly elaborate visitors center, which was closed due to the late hour. Then camp, and what a camp! It’s almost stunning. Fresh paving, including short pull-offs for camping slots. Maximum vehicle length is listed at 28′, and that’s about how it actually was for the Intrepid, which opens up to 28 with the cargo box swung out. The cellular signal is a couple of bars, but don’t count on watching online videos. A few small TTs are here, using pull-offs beside the road. And some tenters. Bathrooms with flush toilets, and two outdoor sinks plumbed in as well. Dumping greywater is prohibited here, and as a practical matter would be a bad idea anyway

Just in time for the Sunset View.

A nice couple out for an evening walk tagged me as soon as I levered myself out of the Mighty Furd, asking about the Evelo e-bike, which led to other things like the recent Expo. I made the mistake of mentioning this blog in there somewhere, which could be viewed as a punishment for masochists. Hopefully, they will not be tempted to suffer along with you. After that, up went the roof. I must say, for a camp where everyone is in close proximity, the separation is well done, and it’s quiet. This is not your typical RV crowd. There’s supposed to be three pueblo cliff dwellings near here as well, and I may just screw up my schedule a bit further in order really enjoy this place. It’s a wowza.

This ain’t the kind of campground I’m used to. I chose one closest to the restrooms on purpose. The paving and landscaping are well done, and I’m still trying to wrap my head around camping in such civility.

To the rear is this.