The Price of Being Picky 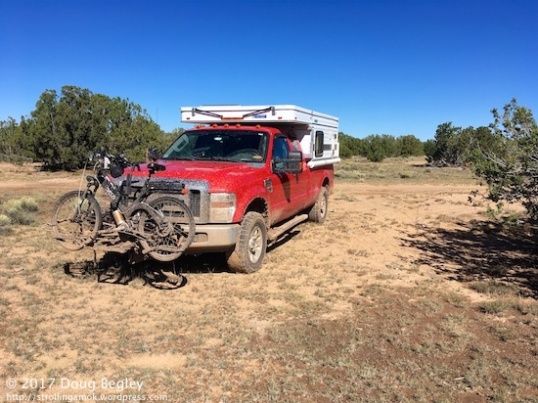 The Furd looks better from a distance. Though merely filthy on the outside, the wheelwells and side steps looked like giant barnacles on a ship’s hull. I cleared away all I could by hand before this photo was taken.

Problematic campsites, like plane crashes, seem to run in threes. This one was called the Caja del Rio Plateau, miles west of Santa Fe, New Mexico. The coordinates given were 35.691879, -106.21582. What I’m guessing was 15 miles of off-road adventure led me to open pasture with no sign of past camping activity, no promised magnificent vistas, and nothing to recommend it but solitude and solar. Then again, I couldn’t do the last several hundred feet because of vegetation and slope. I assume that the coordinates given are bogus, or perhaps I copied them incorrectly.

Once I arrived in that alleged camping area, two problems stuck in my mind: No cell service, and a peculiar silty “soil” that compressed underfoot and promised to create a sticky mud when the rains hit in a couple more days. The kind of mud that stays a half-inch thick on shoe soles and doesn’t want to come off. It was time for an executive decision, and I decided to seek better. Problem is, the selection of campsites in this overall area that are free, below 7,000′ elevation, have good solar exposure, and are workably level, are slim pickin’s.

That expected substantial rain would also crimp my ability to vacate the premises should unforeseen complications surface. The Internet comment about the trails coming in was “roads might be difficult for larger rigs”. I would say so! Perfectly dry, you need high clearance. In and around rain, I recommend 4WD and aggressive tires. It’s certainly not a bad trail, but it does have its mudholes.

It’s rough enough that at this distance (30 miles round trip), it was well worth it to air down my tires. In the video below, I mention going down to something like 23 PSI. I later found that my digital air pressure gauge which I picked up at an auto parts store is off by 1 or 2 pounds, so true pressure was 25. These being E-rated tires under a full load, kicking down pressure that far makes them unable to carry that load at speed. They would quickly overheat and self-disassemble. So I kept speeds under 20 MPH to limit sidewall temperatures, and that worked fine. Not too many stretches on this trail that I could exceed 20 anyway!

I eventually made my way back to within a mile of the entrance. The sun was close to setting, and with no other option at the moment, I overnighted on a side trail that had an even purer form of silt in it. The next morning, I aired the tires back up right at the entrance area. A couple of guys stopped to ask if I needed help, the latter asking about a Four Wheel camper for his upcoming retirement. He was ticked that he had followed all his friends’ advice and got a full crew cab pickup with a short bed, which now crimped his future recreational options. It was a Chevy 1500 (half-ton) and he was genuinely surprised that I had aired down for what was to him the next best thing to a paved street. I contrasted that with the memory of a couple touring a rocky Arizona trail in their 3/4-ton pickup, the female of which pointed out in no vague terms just how physically punishing the experience was. You’re seldom aware of what you do not yet know.

I had some minor errands for Santa Fe that included spending over ten bucks at a self-serve car wash, which took over twenty minutes to get off the worst of it. On to the next camping possibility further south!

The 53-minute video below is my trip back out, which actually took over an hour and a half. Yeah, I know that posting all these long dashcam videos is nuts, but you never know what you’re going to run into when hitting new trails. This one is quite different in its own way, and in my mind, worth it. The proof is the considerable time it takes to edit out the unnecessary footage. If I didn’t think it was worth the effort. I wouldn’t bother. If you’re into seeing what it’s like to explore new trails, then you be the judge. By the way, at one point, the e-bike seems to jump into the air a few inches. That’s because it does. Both tires slowly went flat from Taos Junction’s goathead thorns, and that lowers the wheels deeper into the support hoops. With the hold-down clamp not being lowered to suit, it’s popcorn time!

6 thoughts on “The Price of Being Picky”