Out for a Walk

A good part of the slope down here where I’m standing is solid rock.

The glorified name for this post is a photo essay, but really, it’s just a bunch of snaps I took as I walked a half mile further down, and returned to camp. The walk at the trailhead is fine, but passing vehicles made me wonder what was down there. My camp is at a spot that’s difficult enough and sloped enough to slow down even ATVers out for the weekend. After a day or two here, I noticed that I was seeing some vehicles going one way or the other and not returning, indicating that my trail connected to something meaningful at both ends, and so was not a dead end spur. A look at an MVUM showed that it does indeed connect and, if passable by my rig, would be a shorter overall route to resupply at Buena Vista.

The small amount of passing traffic is not the nuisance it usually is elsewhere. If I were to perch out by the road clear of the bushes, there would be entertainment value in watching how the pickups and SUVs negotiate “my” bend in the road.

See, you come ’round a bend to find a steep eroded area where getting traction on the dusty surface can be an issue.

First day, I caught a glimpse of some kind of old trail runner SUV heading toward the way I’d come from, having no trouble with the climb. Day two brought no less than three full-size vehicles heading up the rough incline. The first was a big, newish Dodge pickup with an Outfitter pop-up truck camper in its bed. It stayed far to my side, which pitched it at quite an angle, but had no traction issues at all. It just drove up and out, and kept going. The second was a shiny new full-size Chevy SUV with six guys in it. I was already sitting outside aimed that way by chance, and saw it reach a point where it came to a halt and rocked back, with the sound of at least one tire scrubbing the dirt. A passenger got out and stood in front, acting as a spotter. When that worked, he then got back in and they continued on their way, smiling at me. Not long after, an aging Chevy 4WD pickup did basically the same thing, but this guy was running solo. The nearby bushes block my full view of the trail, so I can only guess at their tire path selections.

Since I don’t do campfires, I sleeved in next to this fire pit to take advantage of more level ground.

At any rate, that made me think that if either of these more troubled vehicles had started at the other end, that the trail couldn’t be any worse than the spot right next to me. I decided to wander down that way as far as I could, which isn’t far, owing to the combo of energy-robbing meds, lots of steep hills, and elevation. Even so, apart from two trouble spots, the trail looked do-able.

Trouble spot?? Yup. That overhanging branch is lower than the Intrepid’s roof and gets stout more quickly than I’d like. Without the solar panels on the roof, this wouldn’t be a problem. The way my panels are mounted, it potentially is. Lacking an appropriate saw, this calls for a careful process that includes much getting out to look.

The Ford’s sheer size makes this a challenge. Staying hard right might keep the rocks off the left tire sidewalls – or not. The left-side tires could simply be forced over the rocks, but it’s quite a climb, and would be needless stress if it can be avoided. The Ford’s long wheelbase makes staying right and then cutting hard left to take the bypass tricky but do-able – except for a low 6.5′ branch not shown that covers the left side. Drat. For reasons apparent only when seeing it in person, straddling all of it would be a real problem. Making it is not an issue. Doing so without risk of damage is, but I plan to give it a try by staying right. 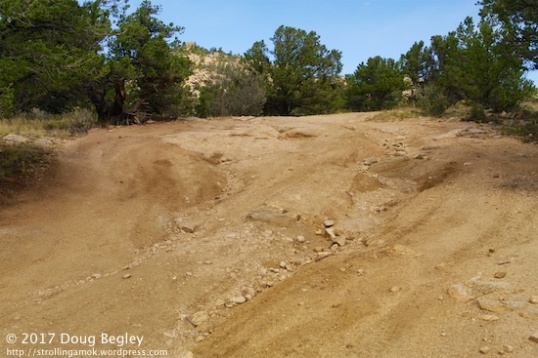 This is what I passed on the way in (heading toward the camera). Obviously, the severity of its features look flat and vague here. To the left is a low tree branch and a sudden drop that could be an issue for the Ford’s rear overhang. So I straddled a deep groove to the right, and all went well. On the return trip, I’d probably see about keeping to the left side, since the overhang issue would not apply.

Oh yeah, and whichever path you take, watch out for that rock!

Once I stop focusing on the trail itself, the appeal of the area itself begins to stand out. This is another place that I’ll be sorry to leave. 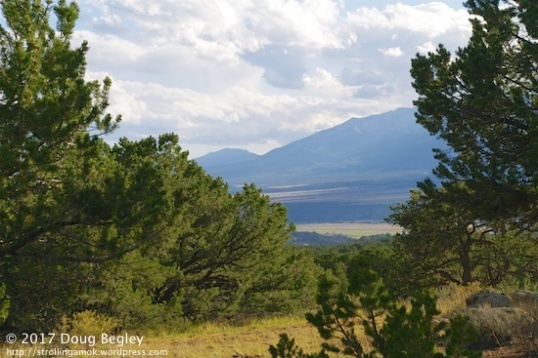 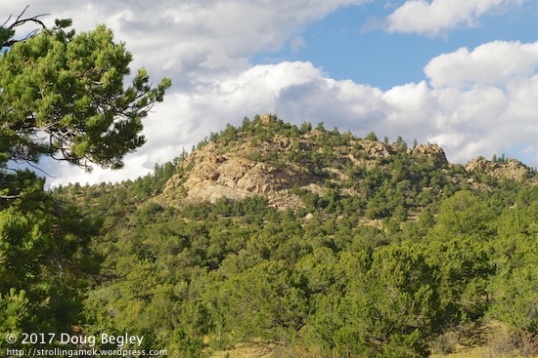 I think of these as the Three Sisters, as they all line a gully. Trees like this make me think of tough winters.

My turn-around spot. See how the trail keeps winding along at center-right?

Today is the first day where the air is clear enough to see the undulations in the mountains, and the valley in detail. A fine day!

5 thoughts on “Out for a Walk”