Days on the Monon Rail Trail

The Monon Rail Trail is the Interstate of bike trails.

One delight of being stuck in Indianapolis is the Monon Trail, an arrow-straight paved recreational trail running 20 miles, from downtown Indy to the northern suburb of Carmel. As was pointed out to me, that’s pronounced CAR-mel, not that snooty car-MEL, as in California. This post is a composite of three days involving the Monon and/or Carmel. See, the oppressive heat and humidity finally tempered, and I took the Evelo Aurora out for a brief 6-mile spin one day, just to gauge my butt’s condition, or lack of. One of the trailheads is just a mile from where I’m staying, and the main connector involved has a broad shoulder. Low and behold, I could feel the seat by the end of the ride. 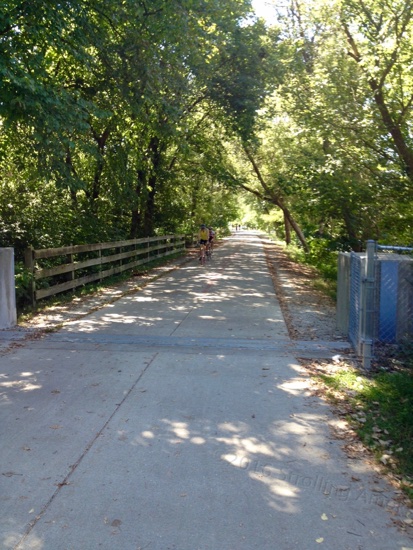 Heading south toward the city.

That particular ride took me south, and there are stopping pull-offs to view the scenery. This was on a weekend, when the trail sees fairly heavy usage. Didn’t crimp the pleasantness of the ride, though.

I mean, this is a serious bike path!

When a commuter line was ended and a bike trail proposed to be laid on its bed, many of the homeowners beside the rails wanted nothing to do with it, the usual cry being, “Not in my back yard!” They were afraid it would provide a beeline for those, you know, inner city undesirables to loot and pillage further north, and their property values would plummet. 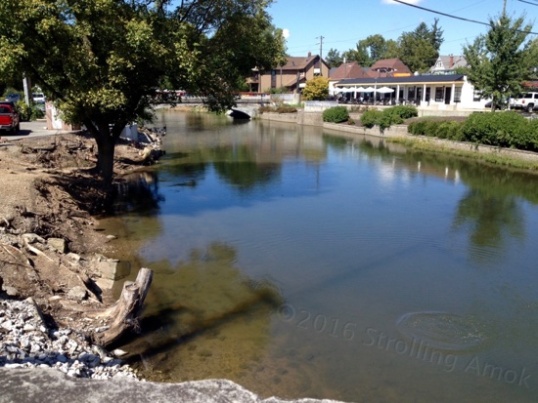 The gaze off one of the bridges.

Reason prevailed however, and today the Monon has become a major selling point for properties beside it, commanding a premium in prices. It’s flat, it’s paved, it’s straight, and there are at least a couple of restroom and water stops alongside it, not to mention a healthy quantity of restaurants and beer halls with access and outdoor seating service right alongside. Crossing points at streets are all signed, and although cars aren’t supposed to have to stop, they almost invariably come to a halt even if you look like you have no intention of wanting to cross. Other crossing points are under- or overpasses, all very neat and tidy.

My second ride took me on a 15.5-mile round trip ride to Carmel on a weekday, passing walkers, joggers – which included moms with those specialized baby carriages – and other cyclists. I pooped along at 10 MPH on the trip north, enjoying the ride. I knew I should turn back at around mile 4 if I ever hoped to climb back aboard within a few days, but the day was perfect, the scenery was wonderful, and the trail was in use but not at all crowded. By mile 7.8 I was finally at the restaurant I had visited with family a week before, and turned back. I knew I’d pay for that delay, but what a great ride! Knowing that seat time was now the issue, not miles, I was able to throttle up to the Mighty Aurora’s 19.5 MPH maximum for much of the trip back without scaring anybody. (I have geared the Aurora down for better hill-climbing ability. My optional NuVinci gearhub, for all its virtues when trailriding the dusty and arduous Southwest, lacks the granny gear that most derailleurs offer.) Signage in Carmel has a 15 MPH speed limit, while further south it goes to 20 MPH. Even on a faultless trail like this, 20 MPH is clipping right along, and you throttle down when approaching others rather than blow past them at maximum warp.

The previous visit to Carmel by car was for a dinner out, which by luck coincided with a sort of mini-marathon. Several hundred runners took off down the main drag downtown while we stuffed our faces and drank beer. Then we slowly walked up and down one block as the full-gut version of a bracing constitutional.

Come on, really, who doesn’t like the Oscar Mayer Wienermobile?

Downtown Carmel is peppered with these remarkable sculptures. In this case, a child tests whether it’s holding a real newspaper.

That’s not a real paper bag, those aren’t real packages, and that isn’t French bread.

This one is parked in front of a real music store, something I haven’t seen in decades galore. And I’ve never seen sculptured dollar bills at all.

There are many more, and a few are quite complex.

All in all, being stranded around Indianapolis is not exactly a hardship, is it?

2 thoughts on “Days on the Monon Rail Trail”