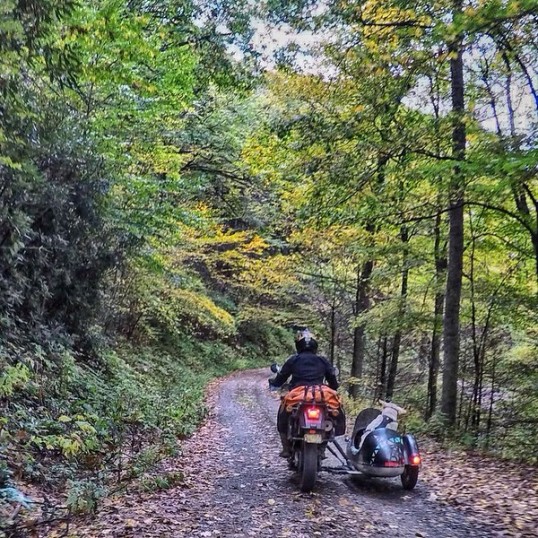 “I believe embracing our crazy keeps us sane,” is one mantra that Mallory Paige follows. A young woman in her early thirties, Mallory has done some world travel and some VW bus vandwelling. While riding in a motorcycle sidecar in Ecuador one day, she got the crazy idea that she could ride from Oregon to Alaska and back on a motorcycle, and with a sidecar attached, haul her labrador Baylor along for the ride. Then near trip’s end, she advanced her internal throttles into full-crazy and decided to tour every state in the country. She’s been doing that for awhile now, proving to herself and anyone who cares to read her writings that both courage and fear are an integral part of us and part of life, and that the decisions we make have a huge impact on our lives.

I don’t advocate her site in the belief that everyone should run around the country with a motorcycle+sidecar combo or anything else. She does not appear to believe that either. I do so because her writing is superb, profoundly insightful, and inspirational. Regardless of what form your life dreams take, her website is a source of inspiration to implement your own dreams into your own life.

Example from today’s entry:
“I’m forever torn between wanting to nest in the familiar and explore the exciting unknown. When settled into a rooted routine there’s a part that longs for the discomfort of adventure. And when faced with the constant upheaval of travel, a part wishes for nothing more than a return home.

“I used to think it was a disconnect needing solved. First I thought staying home would cure it. Then I thought lots of travel would flush it out. Now I accept it’s just an innate quality of being alive. I’m sure anthropologists could explain its roots to our past nomadic ways. Biologists could point out all the ways we’re hardwired for such an experience. All I know is how it feels. A light fog of unsettled forever hovering in the background. The slightest desire for the other no matter what. Like a missing appendage, the double yearning forever haunts us, sending unexpected twinges into the phantom limbs of home and exploration.”

For me, the above explains in a coherent form my own felt preference for a dual-rig approach to living, which I set in motion late last year. Tour the country in an “adventure-capable” rig, then return “home” to bask awhile in the TT’s decadent comforts and conveniences (such as they are) before setting off again. Mallory has insights aplenty, like “I’m not fearless and you don’t have to be either to seek adventure. You just have to be committed. To give it a go.” She views herself as ordinary but committed to living in such a manner that brings out her life and herself in a fuller way. “I have a vision of the adventurer I want to become,” she says.

To the oft-heard comment “Lucky you, getting to go on a such a long, worry-free vacation,” she responds, “It’s not a vacation, it’s real life. Marked with the full spectrum – excitement, boredom, fear, fun, stress – of human experience. Much more difficult than the steady, routine-filled life I leave behind, but fulfilling to the core.” and, “Motorcycling, vanlife-ing, any type of long-term traveling is not about ease, comfort or carefree fun. It is not a stress-free vacation.” Me, I’ve dialed way back on the adventure aspect with a comfortable and competent pop-up truck camper, but the core reality is the same. To deflect the “homeless” aspect of full-time RVing, when people ask where I’m from (which assumes that I’m on vacation and am based out of a house), I tell them Illinois, but that I’ve given up my home to tour the country full-time. By implication, I hope to convey that this is how I now live, by choice. I’m not homeless so much as successful in finding a workable way to live, plus, fulfilling a past dream to experience all that this country has to offer, such as time will allow. It’s a double win. What with my obviously being retired by my appearance, that paints a plausible picture in their minds that this is an eternal, happy vacation, and they leave with pangs of wanting the same for themselves.

But in truth, this is no vacation. I’ve been on a few. I know what they are. This ain’t it. Living your dream is not much like a vacation. There are wonderful, joyful and rewarding aspects aplenty, but at least some of the time, you’re facing down your fears and uncertainties while immersed and operating in very unfamiliar territory. And, it happens to be territory where you can easily and unintentionally get yourself into deep weeds if you count on your ill-considered assumptions as being correct. My meager personal supply of courage or even bravado has long ago run as thin as broth, but I’ve found that you don’t really need courage to live in the way I’ve chosen – “chosen” being the operative word for selecting among a very few limited options.

All it really takes is the determination to persist in turning lemons into lemonade, and to learn to recognize and appreciate the upsides, some of which are remarkably up. It’s a life of incessant discovery, both of myself and of a wholly unfamiliar lifestyle. Distinctly non-outdoorsmanish that I am, I still get to appreciate a cool morning’s sunrise and the breeze through the trees, accompanied by the songs of birds or the tapping of woodpeckers. It comes with the territory. I also get to occasionally and unwillingly stay awake most of the night, waiting out the howl of wind rocking the truck and flexing the Intrepid’s roof and fabric walls, the sound of hail or dropping tree twigs hammering the roof and vital solar panels, or the concerning snort or crunch of unidentified paws on the ground nearby. I get to wonder what is keeping some device or equipment from working today. I haven’t personally had any vacations like this. Those were carefree. This is more like a continuation of life, just on a different plane than in my former career-in-the-suburbs lifestyle. I like it, and I like the relentless discovery of it, but it’s life, not a vacation from it.