The Silver Island Mountains are so named because they resemble an island of mountains on an otherwise flat terrain. I don’t use the term “featureless terrain” because the salt flats are on the eastern side, while mud flats are on the western side. The “Scenic Byway” loop, most commonly taken anti-clockwise, heads north, then west, then south around the mountains. The official length of the loop is some 48 miles, though the completion to get back to the same spot (camp) is just short of 52 miles.

Though not breathtakingly high, these mountains are interesting in their features.

This mountain has one section which is beginning to break apart, spilling its boulders below. 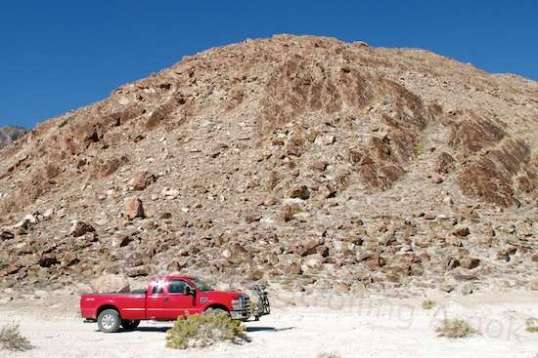 And this one has disintergrated to a large degree, the bottom strewn with large rocks that have tumbled down. Like a few others, this stop had compacted dust so thick that I wouldn’t go off-trail unless I had to.

This part of the trail varies in features. Except for a few tight twisties this way and that, you can go at whatever speed you care to.

Then you come across erosion washouts like this, but only a couple. The mountains are close enough to the trail that they capture only limited amounts of runoff.

Basically, this loop is advertised as 2WD high-clearance vehicles only. 4WD is recommended if you take any side trails. This is true. Unlike the main trail, most side trails are not graded even occasionally, and can present surfaces where traction and slope can become an issue. The first half is car-friendly, as long as you don’t have one of those little front-wheel-drive sedans with a long, overhanging snout, or an old Austin-Healey 3000. I’d also rule out grippy, soft-rubber street tires due to the gravel and rocks. The BLM description says that some sections are suitable for bicycling, which I don’t get, since it all looked very do-able to me. All you need is decent tires and some camping gear. The Evelo could very likely do it on two batteries, being careful to keep speeds down to avoid disappointment. The combination of soft ground and sneaky-slow changes in elevation could be a capacity-sapper. Count on six hours.

This was unusual in that there’s a long fracture line running all the way around near the top. 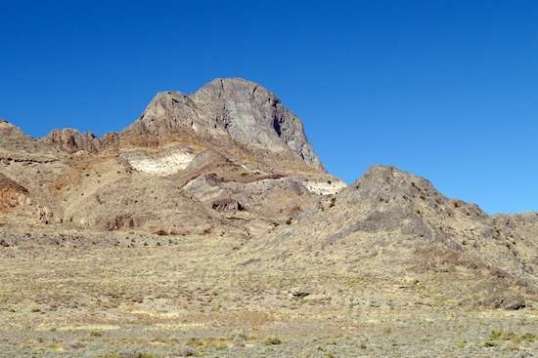 Being used to limited-length trails, my thoughts here were, “Wow, this thing just keeps on going!” The trail has to wend its way around to the right of the mountain ahead. 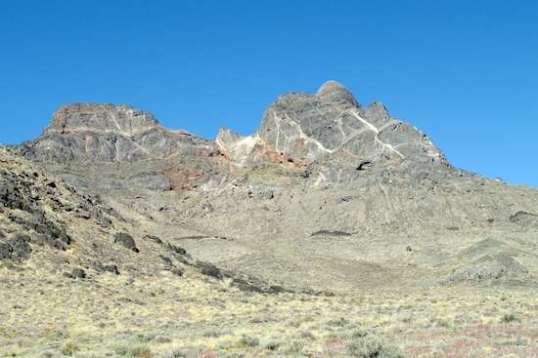 A plaque put up to note the loop’s intersection with the infamous Hastings Cutoff.

The Hastings Cutoff was key to the Donner-Reed Party disaster of 1848, where a party of immigrants set out from Illinois to try to get to California as quickly as possible so that they could land grab the choicest areas that the ongoing Mexican-American War was making available. They made it to Green River, Wyoming and went on to Bridger, where Bridger himself recommended a new detour that was supposedly faster and would cut some 350 miles off the usual Oregon Trail route used by the parties just ahead of them. His ambitious lawyer pal Hastings wanted to become rich and politically powerful, and had published a book back east that pushed his new and better way to get to California. Trouble was, he’d never taken much of it himself, and was speculating.

A friend of the Donner-Reed party had gone ahead on this new route, returned, and left a letter with Bridger warning them not to take this new variation under any circumstances. Bridger palmed it, and sent the group of almost 90 on their way. It’s a long story. The main problem was threefold: the trail was, with proper guidance, technically do-able, but its passable weather window was much more limited than the main trail. Too soon, and you bog down in mud. Too late, and deep snow stops the show. The second problem was that Hastings had gone ahead with another party, and had left unhelpful notes in bushes along the way, one of which advised them to stop where they were and wait for him to show up to personally guide them around an impassible section that he had discovered on this, his first slog through his own route. He never showed, and when two of the party left to find him south of the salt flats, he refused to come back to help them. Thus, they were left to find their own way through terrain that was guaranteed to slow them to a crawl, largely guessing their way around and through upcoming mountain ranges. Third, they were, like most other such large families venturing west, inexperienced in the wild. When problems hit, they developed enough ego, animosity and violence toward each other to do some pretty heartless things. They broke up into separate groups, which laid them open to Indian attacks. Indians along the way, who had suffered earlier slaughter for mere sport at the hands of the military, crippled and killed most of their livestock that would be needed to keep them alive later in the journey. Not good. A little over half of them made it to California thanks to four rescue attempts from the California side, the rest succumbing to starvation, freezing, murder, and abandonment along the trail. Not a pretty story, and the Silver Islands Mountain Loop intersects the Hastings Cutoff at two marked points, just after they had begun their most serious difficulties in getting across the Salt Flats, where many loaded wagons bogged down and had to be abandoned.

Oddly, the Mormons who made it to Salt Lake just a year later credited the Donner-Reed party for their success at reaching the their destination just in time to grow one much-needed crop before winter set in, since that party had literally created the path by hacking their way through the trees and bushes.

I wondered at this sign, since this is still Utah. It would appear that this is a merge with what was known as the California Trail.

Hmmm, a side trail heading north to a point named Donner-Reed Pass, not to be confused with the Donner Pass in eastern California where the snowed-in mayhem took place. I went a little ways down it, but when I saw that it’s a narrow trail and then looked at my watch to guess at my travel time along the tougher half of the loop, I decided to back out and stick with the plan. If I were carrying my camp with me, I might have been more tempted to take it. 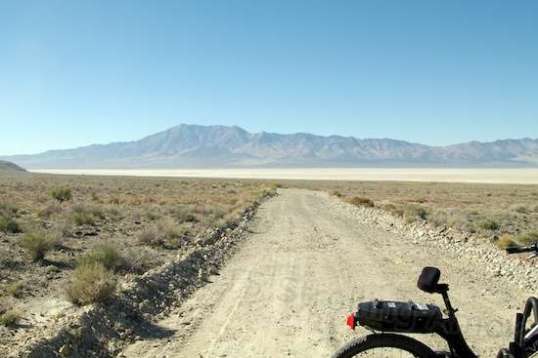 Mud flats ahead on the west side of the mountains, which I had no idea existed.

The start of the return hugs the inclines at places in a single lane.

These spans of dried mud are vast, and I wouldn’t care to attempt this trail after a rain.

A cattle pen? It included a loading ramp. And it all looked to be in good shape. Not a beast in sight anywhere, though.

This side of the loop was much further away from the mountains and forced attention away from them. It’s sole blessing: occasional spans of sand or dust, which cushioned the Mighty Furd’s 70 PSI tire pressures a bit.

You need to stay awake on this less interesting return south. The distance from the mountains makes for vast slopes to gather rain and aim it toward the mud flats. This is one of the deeper ones, but even the ripples are jarring in the F-250. The trip north ran between 20-45 MPH. This half was like rush hour traffic: crawl to 10 MPH and back to crawl, over some 20 miles.

An interesting graded side trail that asks you, “Where do I go?” That’s all rain-collecting slope coming toward you. 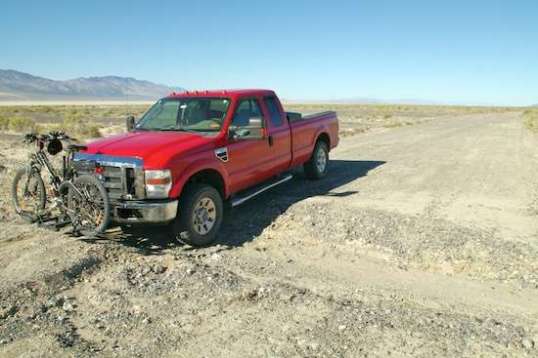 Driving in the dark here would be exciting, but not in a good way. I’m glad that the bike carrier has as much ground clearance as it does. I think some newer TTs actually have a shot at clearing this, but it would be a get-out-and-look affair. 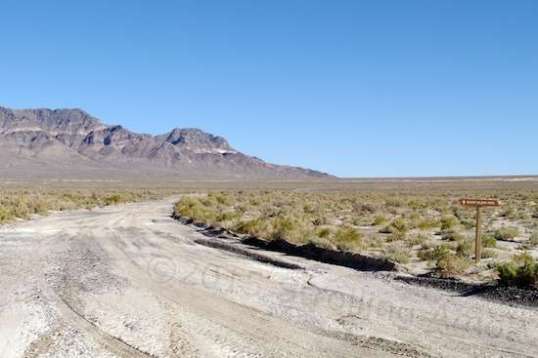 This is a marked connector that links the east and west sides, to cut the loop distance in half. Travel time is estimated at 3-4 hours, and it took me 3-1/2. A normal half-ton would do it much closer to 3, the difference being on the rougher second half.

Whoopsie! This is one serious erosion crossing. It comes to the center of the trail, and you can bet that I hugged the “left” border for fear that Tubby’s 8,500-9,000 pounds would collapse the surrounding dirt wall. It was a little close for my taste.

This isn’t just a dip – it drops deep like canyon walls. One more good soaker (possibly due in a few days) will take this canyon well past the halfway point on the trail. Then it will take some creative detouring over some very tough bushes to get around it.

Not your average vanner camp. This is a military van on a mission.

About here, I came across a young couple sitting beside the road, and the guy was in camo uniform. “You’re out here for fun, or what?” I asked. It seems that a rockhound saw some iron and excavated around it to discover an unexploded WWII 500-pound bomb that had been dropped when Wendover served as a bomber training base and the initial facility for development of the first atom bombs. He’d recovered it and called the Air Force. I took the shot with the telephoto cranked all the way up, and later guessed that we three were probably just outside the thing’s half-mile “safe radius”.

The story about this find is here, and the follow-up is here. What’s especially interesting to me is that just a few days previously, I talked to the guy (Craig Alvord) who later found it! That’s when I was venturing down the loop with the Defiant in tow to check out a site possibility, and he stopped ahead of me to warn me that going more than a few miles ahead with a TT would not be a good idea. He was afraid that I was completely new to the area, and didn’t want me to get myself into a fix. Said he’d spent a year and a half here. I recognized his truck from the news report photos. Yep, just another boring day boondocking out in the wastelands.

These guys were another half-mile or more down the road, looking like they were setting up shelter. They were almost a quarter mile off the mountain side of the trail, and it beats me how they got to that spot. 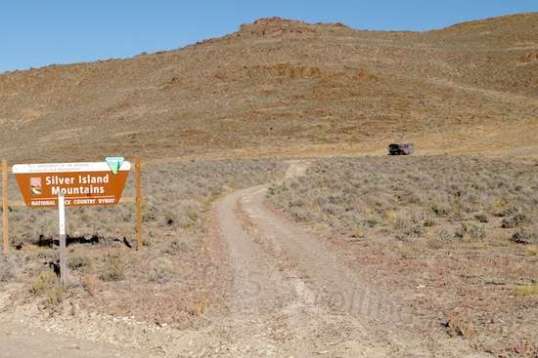 A mile further down, the tail end of the official trail along with a converted bus retaining its side-mounted stop sign. I suspect it was part of the bomb disposal unit. It’s not something you advertise on the sides. 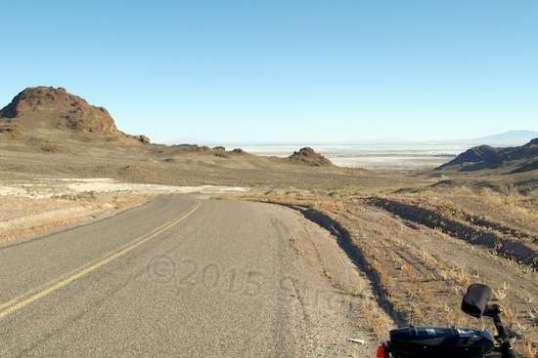 Trail done, the run back down to camp was a deluxe smooth pavement roll downhill.