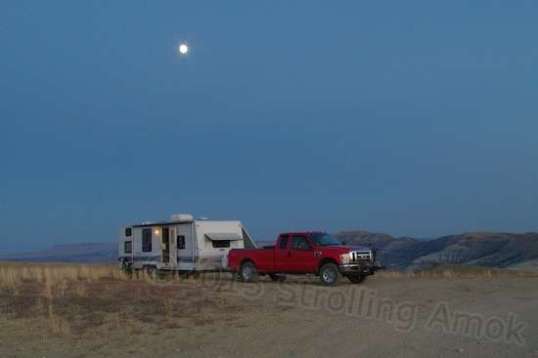 Sunset, and the full moon is riz.

This is just a post about a 24-hour period, a nice sunset and view into the valley, followed by rampaging vermin at 2 in the morning. Ahhh, nature! A hastily-deployed trap got him sometime later, since the worst thing that can happen is for the critter to return home and tell his buddies about the bonanza. If that happens, it’s party time.

I reviewed the Defiant’s Vermin Defense System after breakfast, and determined that since the high frequency repellers were not doing the job, that the Victor Tin Cat would need to be deployed outside. That done, I became displeased with the Jaws of Death traps that I have, because they usually fail to kill the intruder quickly, and it drags the trap about for while, usually into areas more difficult to access. Inside a cabinet, this can be a deal-breaker. Their upside had been that they are easy to release the victim later, and then reuse.

This posed a conundrum of sorts. I’d used catch and release traps first, which had disappointing results when the warfare turned serious. The traditional wire and wood traps caught and terminated their little lives instantly, but were questionable for reuse. These latest plastic-toothed jaw traps caught then and were easy to reuse but, well, if they can’t live to return, than a slow death is just not that cool, Tin Cat aside. The Tin Cat is a mass-capture trap that works quite well – it’s just that the end results aren’t pretty when you decide to open and empty it. Fortunately, it is fairly cheap and effective as a mass trap, and can be discarded if needed. Sorry to hit the gross part, but if you’re camping in an old trailer that’s too low to the ground, this part of camping will surface on an occasional basis. Pretend otherwise, and you’ll be trying to sleep in Party Central by the third night.

A trip to the Ace Hardware in town was warranted for a survey of the local mouse trap board of fare. Apparently, there are a lot of mice around Green River. Either that, or they just happen to be mouse trap aficionados there. Widest selection I’ve encountered so far. But, I digress.

The town begins to light up like a Christmas tree, and in the darkness, the distance makes them all twinkle.

The ride downhill to pavement is two and a half miles. I alternated the front and rear brakes when I could, to give each a chance to cool a bit. No issues – it was just a precaution.

The Green River as it passes through town, wide and shallow. Along the left shoreline is a long and very nice little city park.

Ever see an Ace Hardware store that stocked Yeti coolers? I didn’t think so. But this is Green River, Wyoming.

I’ve never been offered assistance so much in my life, yet it was in a helpful way rather than becoming pestering. I asked the lady at the checkout about those Yeti coolers, and she said they sell a lot of them. She told me that her family drives to Missouri every year, and that it seemed like they were buying ice at every stop. She discussed the matter with her husband, who preferred to live with the cheap route. Like all wives worthy of the name, she worked on him to bring him to his senses, and then when he finally caved, she insisted on Yeti’s biggest one, since they were using multiple cheap coolers. End result, he grudgingly gave in, but was so impressed on the next voyage that he chucked all their other coolers, and now it was his idea. Smart lady.

This is the trek back up to camp. This is the only return trip that, though it took much longer because it was a relentless uphill, didn’t feel like it. It was just beautiful, and I had it all to myself. 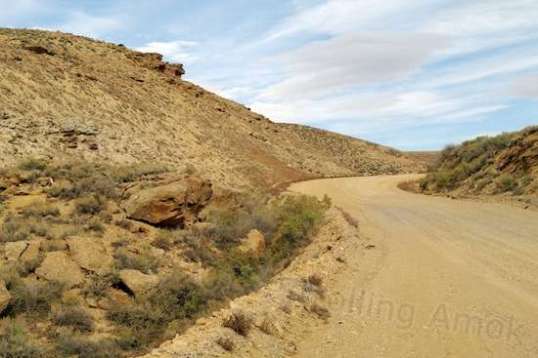 Halfway there. The Aurora’s battery wasn’t that happy with it, but kept stoically shoving away. Once I hit the top, the decreased draw popped the “capacity” meter back up. 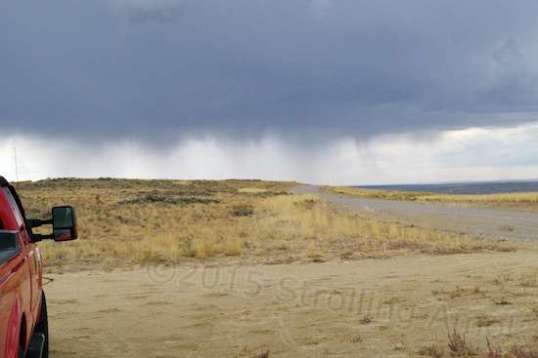 Surprise! Made it with about twenty minutes to spare. Relaxing inside, I was able to watch the rain and remember a good day.

I had managed to find a set of intermediate traps that promised a quick kill with a wire arm that hangs like the sword of Damocles ready to wreak vengeance, yet a plastic loop above it allows pristine opening and disposal of the victim. Win/win, sort of.

By the way, this is a friendly town. The local gift shop that doubles as a UPS shipper not only laughs off charging a fee for receiving and holding packages, but took my cellphone number down and promised to call when my expected package arrives. Yes. Similarly, the Hardware Lady bade me the usual parting “come on back” plea, but accompanied it with a handshake! This is not your usual “just gimme your money” town.

6 thoughts on “Revenge of Evelo Exploration”