Pragmatism won out over Cheapskate. After a miserable overnight in Victor but a nice morning, I decided to forgo a duplicate at a rest stop near Underwood, Iowa in favor of a little-used RV stop hidden behind an Econo Lodge about 25 miles short in Walnut. The 88-feels-like-96 temps and high humidity made me not look forward to enjoying the journey after climbing out of the air-conditioned Mighty Furd. Once you climb into the 92-degree Defiant to lounge and relax, it’s more like the sweatbox in any WWII POW camp movie you’d care to name. But it is a more comfortable heat stroke, I admit. 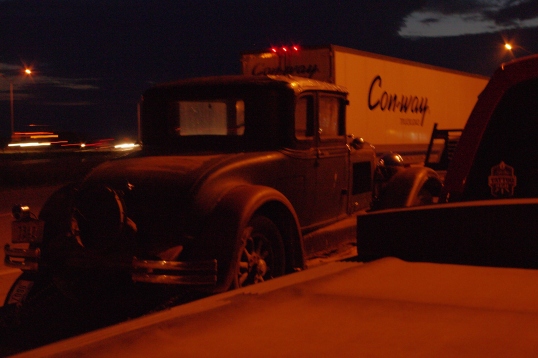 Nighttime at the rest stop. Do people never stop finding these things? A 1930s Ford sedan, shot over the back of my 2008 Ford pickup. How ya doin’, cousin? That duct tape holding down the edges of the roof’s cloth insert will have to come off, pronto.

I wouldn’t call this an RV park, exactly. It’s a great idea that somebody had a couple of decades ago, and then it never caught on.  A small, grassy field in back of the motel has numerous power boxes and faucets for hookups. Unfortunately, the only two spots under the shade trees have outlet styles that I can’t identify, so the Defiant is in the sun, but that’s okay. For the $25 overnight, the power is included, and it’s being put to full use. The Defiant’s rooftop A/C is pulling the voltage down to the minimum all by itself – a common problem in many parks. Considering that I’m the only one here or that will be here, that much of a drop is not too good. Once the cabin temps get down to where they should be, I’ll kick the electric side of the water heater on, and end the personal stink factor. That’s one of the perks of traveling alone I suppose – there’s no one to argue over such priorities. However, I’m sure I miss having someone riding shotgun saying, “Left, left up here…NO, I mean RIGHT! RIGHT!” 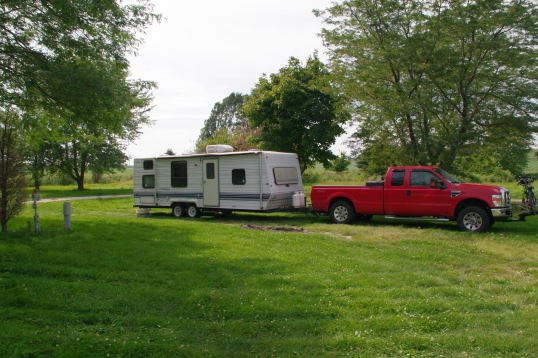 The pretty version of the Defiant’s repose.

The water outlets are what I think of as farm style – vaguely resembling an old manual pump with handle, only all you do is lift the handle. Once you do that, nothing happens for a few seconds before a torrent of water gushes out at an impressive rate. One of the cautions for the Defiant (and most other RVs) is that water pressure should not exceed 40 PSI, for fear of blowing an internal fitting out. That would not be my first preference, so I added a pressure regulator just ahead of my supply hose. Those are surprisingly inexpensive, and very worth it. I’ve seen 70 PSI before. I also have a handy gauge to measure just what the available pressure is, but am too lazy to unpack a channel lock wrench to remove an unneeded fitting. I’ll live with the mystery.

The not-so-pretty version, with the junque yard to the right.

Both I and the desk clerk don’t think I’ll have any company this eventide, and there are a couple of reasons for that. The first is that this area hasn’t seen a mower in a month or two, and the abundant growth hides some pretty uneven ground. Fortunately, I hit the sweet spot pretty easily, thanks to a gigantic level gauge I plastered onto the front of the trailer. The scaled-up size lets me see what the story is through the truck’s rear view mirror, which is a huge improvement over the trailer’s tiny OEM indicators. Those had required a long process of move-and-get-out-to-check repetitions. Again, money well-spent if you’re trying to run a propane fridge. I may be running it on 120V tonight, but the leveling fetish doesn’t stop just because of that. 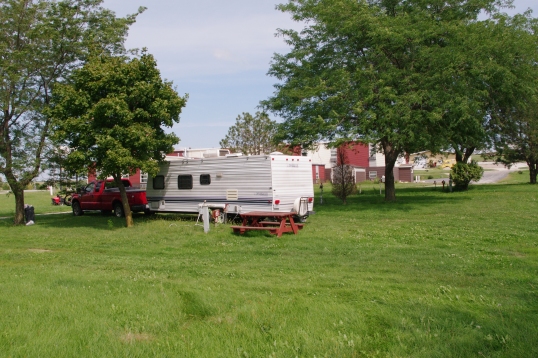 From this angle, the festive Econo Lodge is in the background, and a riding lawnmower to the left, looking a little intimidated.

The second reason is that the surrounding decor includes an auto junkyard next door, discreetly veiled by a few bushes and trees. It’s an ambience guaranteed to earn the disapproval of most RVers, I’m sure. Except for the marginal power supply and this “campground” being ignored for too long, it’s not that bad for a comfortable overnight. There are no individual sewer hookups, so the dump station – which lacks a rinsing faucet – will get my business on the way out in the morning. Always good to have something to look forward to.

I knew you wouldn’t want to say it, but it’s here for you. The full view of the junkyard. You’re welcome.

Traffic has been fairly heavy on I-80, but is of no particular interest except for those petrified individuals you occasionally find on entrance ramps. You know the ones. Instead of nailing the gas to match speed and blend into traffic, they take a noncommittal approach at half-speed, and look for a large enough gap in oncoming traffic to “merge” into 70 MPH traffic while doing 40. Not today, not with this traffic. My favorite today was in the on-ramp about eight car lengths ahead of me, and the passing lane prevented my shuffling over as a precaution. I eased on the binders to cancel the speed control and give he/she/it a little more working room, as I could tell this person was going to need a little encouragement.  My mistake. This individual needed a lot of encouragement. Instead of speeding up, they ran right down to the end of the triangle, brakes on and jutting one fender out in supplication. Not the best. I had to hit the brakes hard enough to wig-wag the tail once, and the driver courageously dived in front of me while we both were now doing about 20 MPH. Made it! I hate to think what might have been going on behind me. Do high schools no longer practice this maneuver in driver’s ed classes? I’ve watched merging drivers actually stop along the entrances, which makes things interesting for everyone in back, who are also now forced to play drag strip into heavy traffic. I suppose that this merge thing needs to be added to the driver’s license test, except that each testing officer would go through a box of Depenz per day. If I owned a tow truck business, I’d push for it hard.

Speaking of pushing, it appears that the Mighty Furd’s engine has finally broken in. I’m used to a range of steady-state fuel mileages ranging from 13-17 MPG when running bare. “It’ll break in,” I’ve been assured by other 6.4L diesel owners when I first got it in 2008. However, I doubt that they had 75,000 miles in mind as the break-in threshold. The recent summer commutes in Illinois suddenly netted me a consistent 18.5-19.5 MPG all summer, and now I’m spoiled. My daughter is horrified, but she’s used to her Toyota sedan whatever. The Mighty Furd is 4WD, and is just short of three times the Toyota’s displacement and weight, so 19 MPG is quite a feat for a 9,000-pound aerodynamic brick on wheels.

Thanks to an even larger brick in back, total weight is 16,000 pounds when the travel trailer is hitched up. Day One fuel mileage was 11, one MPG higher than average in spite of a mild crosswind. Today’s crosswind was definitely stout, dropping fuel efficiency to 10. Not sure what tomorrow’s will be. A cool front will be coming in at mid-day, with perhaps 3 days of thunderstorms, which should make a headwind more of an issue. And finding decent fuel is a crapshoot – using any more than 5% biodiesel mix will shorten the lifespan of the Navistar engine’s emissions system for my model year. It’s common to find labels on pumps saying that the fuel they sell will “vary between 5%-20% biodiesel”, and I have the suspicion that mileage is not as good with it, and that “regens” – when the emissions system tries to clear the exhaust particulate filter – occur more frequently. Fuels it seems to be happiest with: BP and especially Sinclair. I’m just on the edges of Sinclair’s territory right now, and this tank is half gone. Good times ahead, at least for the Ford’s engine.

I’ll devote myself more seriously to the cheapskate thing once that predicted temperature drop looks like a sure bet.