A Trail in Mormon Lake 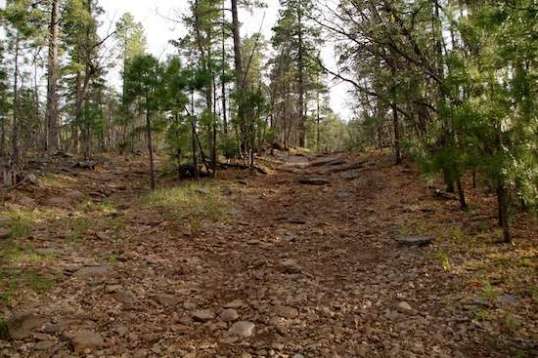 An inviting trail, no? A slightly smoother detour is to the left.

While scouting trails to locate a campsite in Mormon Lake, Arizona, I passed one branch off NF-219 that did not look promising as a place to drag the Defiant. Its start was already past an impassable dip in the main trail, so that was that. But its appearance was forested in and seldom used, and I mentally marked it as a place I’d have to wander down later.

When later did arrive, that tour took a little doing on two counts. NF-219 goes up a low mountain, and although this branch was not all that far from camp, it was still a puffer to reach on foot. That made me decide that hiking up 219 a mile or so every other day would be good exercise, and it was. It let me know that riding the e-bike isn’t all I should be doing.

The mental challenge was that, as bonafide city folk, I had little idea what was in these quiet and relatively untouched woods. I’d seen lots and lots of pretty sizable canine tracks in the mud running parallel to numerous elk tracks. Ain’t no wolves here, that’s for sure, so they must have been coyotes. But coyotes chasing elk? Perhaps calves, which smaller tracks I was never able to spot. But you never can be absolutely certain – howling coyotes gathered around the fringes of suburban Palatine, Illinois, and I was once astounded to watch a full-grown wolf lithely trotting down the deserted main drag in the early morning hours. It looked vaguely like a long-haired German Shepherd on growth hormones, but without the bad hips. Feral dog? Possibly, since it did not match the Husky-ish appearance I’ve seen in some photos. Still, between that and an errant cougar rumored to be wandering about in northern Chicago at the time, anything goes, I guess. Actually, in Chicago at that time, the riskiest place to be was the forest preserves near suburban Des Plaines. People would abandon their dogs in them, and I recall two different incidents where joggers were attacked and killed by pairs or packs of them, necessitating organized searches to hunt them down. Unlike the cougar thing, PETA made no threats of violence on those, though they did proudly sabotage the brake lines on a fleet of trucks owned by a seafood distributor in the city.

A little online research showed that Coconino National Forest does indeed have both bears and mountain lions to prey on the many elk, but they also tend to avoid areas where people buzz about. Since I was so close to the tiny hamlet of Mormon Lake, that was good enough for me, and I headed out to check out the trail branch. The biggest challenge? As always, paying attention to my surroundings. My mind always seems to be percolating along about something, whether it be the potential effect of the coming rains on the campsite, or why I sometimes see squirrels and chipmunks, or mice, but never the former and latter in the same location. Being “situationally aware” is not my strong suit, and I have to make a deliberate effort to practice it no matter where I am, in town or in the woods. A transplanted suburbanite can be a liability in the wilds, if a reflective one. The good part about situational awareness is that it helps you notice things like little wildflowers instead of trudging blindly on right past them. It’s an effort worth making. 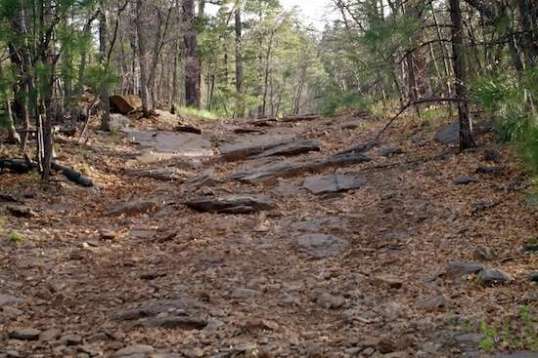 Tent camping from your Prius? Not here.

This trail branch is listed on the Coconino MVUM (motor vehicle usage map) as approved for both vehicle travel and camping, and is fairly long in length before it loops back to a main trail. Like many such designated options in national forests, this one quickly turned into a rough, high-clearance vehicle trail. In this case, the climb out of a gully was festooned with submerged boulders back up the next hill, to the point where I would have to pay some attention if I were to try to drive it in the Mighty Furd, especially when wet. It split into two paths for a little bit, though the slightly easier detour looked even less used than the main path. Once up the far side, I passed a skiing path sign nailed to a tree just before the trail split for good. And both branches were blocked by sizable boulders to keep larger vehicles out. Small-vehicle or tent camping would be superb at the split, but beyond that only an ATV could go. More ski trail signage was posted, and one of the paths was shown on the MVUM, while the other was absent. 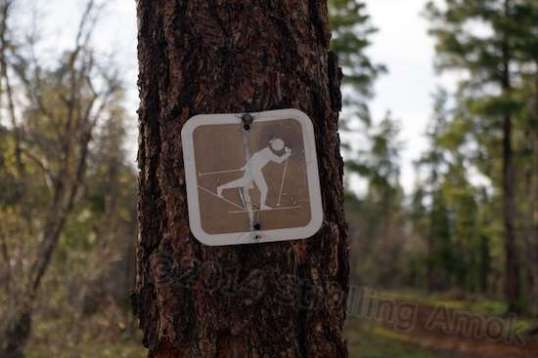 I figured that the blockage amounted to a local takeover, where maybe people didn’t want their ski path torn up, and the horse ride business in town certainly wouldn’t want Jeeps and ATVs racing around during rides. Given the initial difficult access, this looked as good a place as any to commandeer for restricted use. Besides, MVUMs are sometimes way out of date, where the map may be the latest, but relies on old data that has long since changed. I picked a branch, and went down it a ways. Nice. I noticed horse tracks where a couple of Western equestrians had ridden, having parked their trailer at the bottom of the mountain and ridden up past my camp to get up here. I’ll bet that was an enjoyable ride. I eventually reached a few stacks of very large boulders that looked like they would make workable dens for larger critters, and naturally, with my expertise in wood lore, I got creeped out. But I was out for one-hour walks and was already overdue to turn back on this one, so I used that as my excuse and reversed course, wondering if the elastic on most of my white socks is too far gone to make it worthwhile to keep them any longer. How about shoe polishing rags? Just call me Davy Crockett. I never killt a barr, but I got a few invading field mouse notches on my belt, yassir. Don’t mess with me. I’m dangerous. 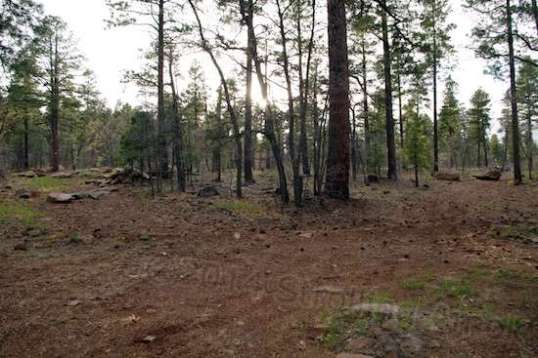 Discounting the wheezing climb up the relentless slope, NF-219 is a rather enchanting trail to walk, with a small pond near the top, complete with a few ducks foraging for edibles. It helps to have an iPhone or similar with an MVUM loaded on it, in order to make sense of the various branches that go off this way and that. The campsite options are few with a rig as low to the ground as mine, but plentiful for smaller ones. The trees are problematic for solar too, but no issue with a generator. Still, I was able to do all I needed to, but had to cut back on using the big desktop in preference to being able to watch movies each evening. Someone with ample panels, a laptop and LED lighting would probably be able to camp unimpeded. Would I go back? You bet! 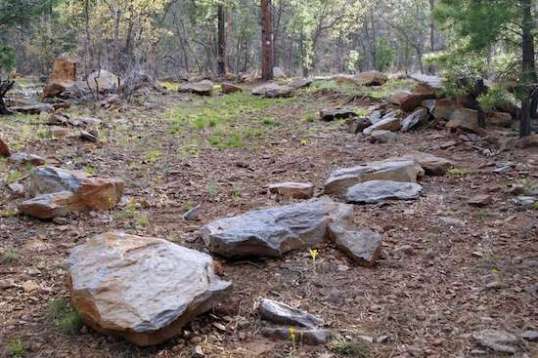 Mechanized touring on this trail is discouraged. 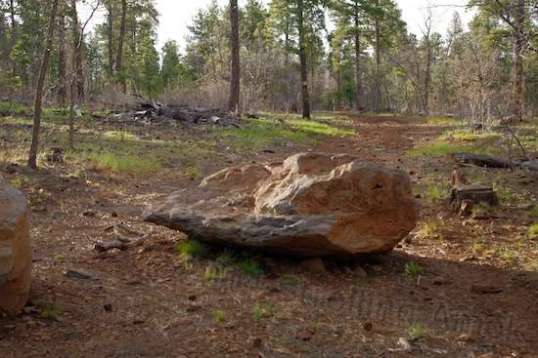 What did it take to move this boulder into place?

2 thoughts on “A Trail in Mormon Lake”