You Can’t Get There From Here!

If there’s no traffic, I like to gawk at the scenery. I liked this just for the play of sun and shadow on the slopes.

From where I’m camped in Quartzsite, Arizona, the spectacular Ace Hardware store in Blythe, California is 28 miles away. On a bicycle, that’s a fur piece. I knew my carcass would never survive a 60-mile jaunt at this point, but I have been curious about whether the only non-Interstate route there was passable for an oldster on an e-bike. A do-able route would open options for resupply, since Parker, Arizona is even further away. But Google Maps shows kind of a frontage road alongside I-10 from Quartzsite to Blythe, so the questions became: is it passable, and what’s the limit on my seat time these days? I pretty much got good indications on both. It started out as a rather routine routing evaluation, and boiled out as an adventure.

If you’re willing to sign in with the camp host to monitor your 14-day stay, Dome Rock Campground is close to Quartzsite, and the price is right.

Dome Rock Road heads west out of Quartzsite, and is a nicely-paved two-lane that wends its way through some decent 14-day boondocking areas. About 10 miles out, Dome Rock Road pulls up to the I-10 Exit 11 interchange, and effectively ends there. There was no dirt trail continuing on, so I had to look around for anything heading westward. I was stumped for awhile. I had just passed another BLM camping area entrance, and backtracked to go in and look around. Voila. A dirt trail that was fairly rough, but looked promising. Not so much a dirt road, but just twin tracks going up hill and down dale. The hills began pretty promptly, but they were mostly fun. The part that was fun was the abruptness of the slopes as the trail went across the terrain. The less fun part was the rocky, loose trail surface that kept speeds low, well under 7 MPH. That would convert the overall distance into a true all-day affair, and make the trip impractical, if it didn’t improve. 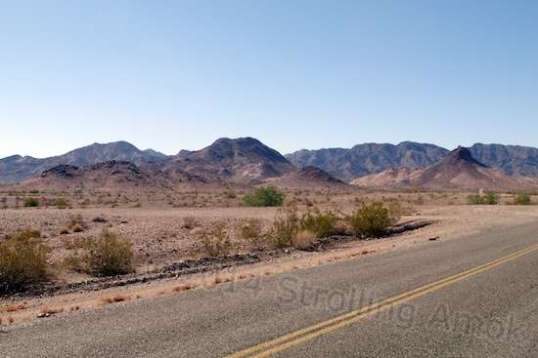 What interested me here was the loss of contrast and color in the further mountains.

It didn’t improve. The hills and trail surface was getting worse. I finally met my hallelujah on a tall, steep grade that stopped the Evelo Aurora and trailer combination halfway up. With a full complement of water and the spare battery, the trailer was probably pushing 35 pounds, which wasn’t helping as the front wheel rebounded from one shifting rock to another. Once you’re stalled in those conditions, that’s it. I walked to the top just to see what was beyond, letting the e-bike power itself and the trailer the rest of the way up.

Starting out on this BLM trail looks pretty promising, since it’s wide and smooth. The little white box ahead is a semi-trailer on I-10.

I was wowed. The backside slope was even worse, appearing to approach a full 45 degrees, with a patch of even bigger rocks. Forget the bike, one look promised no small difficulty in simply walking up solo, hunting for a secure footing. I’d even be squeamish about taking the Mighty Furd up or down this thing, for fear that I might slide it sideways and roll it. The climb or descent could certainly be done – but not by me in a vehicle that I paid for. I’d have to empty both the Tankmin water tanks and the bed itself to have a chance. 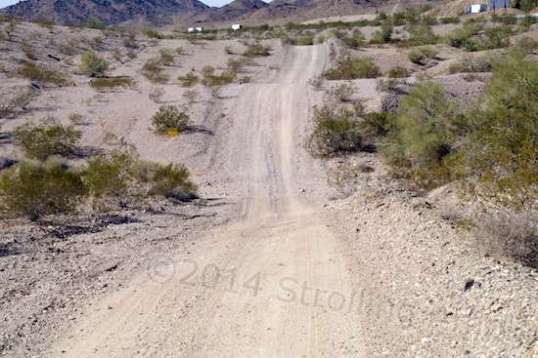 A little farther on, some rewarding hills to add interest.

At any rate, the trail beyond looked nearly as interesting, and the thought of at least 10 more miles of it made it plain that any bike trip to Blythe would mean packing a tent and bedroll into the Ibex trailer. I sure wasn’t going to hazard a roll down the smooth but deadly skirts of I-10 itself. This trip was officially over. The descent down the “good” side of this juggernaut was an exercise in itself. This was the first time I’ve had to very carefully balance both front and rear brakes, to keep maximum braking but without locking and sliding too badly. Usually, you can just concentrate on riding the rear without skidding, and just squeeze in some front to keep speed down. This one required all the attention I could give it, and since disk brakes don’t pulse like rim brakes can, there’s one less issue to deal with.

This got my attention because I’m not seeing any swerve around what is ahead.

Ascending another lower hill on the way back was more of a power issue than traction, as it required some moderate effort on the pedals in the NuVinci hub’s lowest gear ratio to make it. Usually, I just pedal in a very light-duty, sustained way, to keep my heart rate down. But this was no long 4-mile grade, so actually doing a little work was a non-issue. Felt good to have a moment of flashback, where I was actually working for a hilltop. The mechanical need for this was notable, considering that I’ve already downsized the standard 48-tooth chainring with a 44 for leverage. But then again, considering total rig weight and physics, and the fact that this was not by any stretch of the imagination a workable errand route, I shouldn’t have been surprised. After all, unlike a normal rider, I’m not helping very much. It’s just that I get so used to pulling off little miracles with this thing that my expectations get off-kilter. 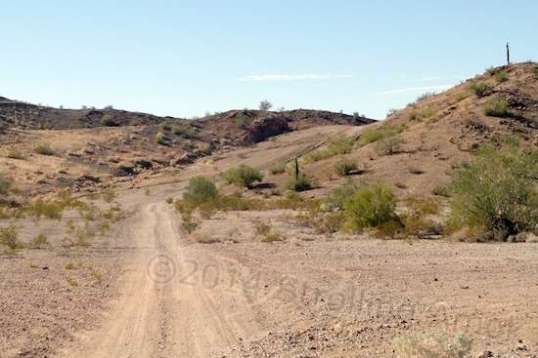 At a distance, this raised some questions for me since, although the slope near the top is going to be an issue, I think maybe I have a shot, trailer and all.

Anyway, I made that hill and several other easier ones, and waved at a couple in a recent Jeep headed the other way. I figured they’d turn back like I did, but maybe not! They didn’t come by again in the ten remaining minutes that I was on that trail. Probably just gawking at the top of that big hill, since the view was quite something. Nice young couples in shiny newish Jeeps don’t usually risk bending what they’re still making payments on.

Ummmm, no. Not going to happen. The few yards of dirt near me goes to loose gravel and rocks from there on up. I made it up halfway before my front tire shifted to one side on a rock and forced a stop. It wasn’t as it it had been going well up to that point, either. What a mess!

I was glad to stop dodging rocks and get back to Dome Rock Road. Having aborted my exploration while carrying a spare battery, I could afford to jack up the pedal-assist level for greater speed, and I then detoured briefly onto Quartzsite’s main drag on a quick errand. Then back to camp, completing just 25 miles total. My posterior was okay but not great, and the following days showed that even the minor jump from 20 to 25 miles made for memorable body adjustments which are still ongoing. There was plenty of battery left at the end of that trip, so the distance limiter is me, and that has to end!

The westward side of that same hill tilts to one side as it slopes more steeply and has deeper loose rock. I wouldn’t even walk down it unless Raquel Welch was down there waving a large plate of cashew chicken and a bottle of vodka. Interesting view though, huh?

I just liked this rumpled look.

I don’t do running starts, so this hill on the way back had to be taken with a modest grunt factor. I missed the worse loose patches that would have stopped the show. 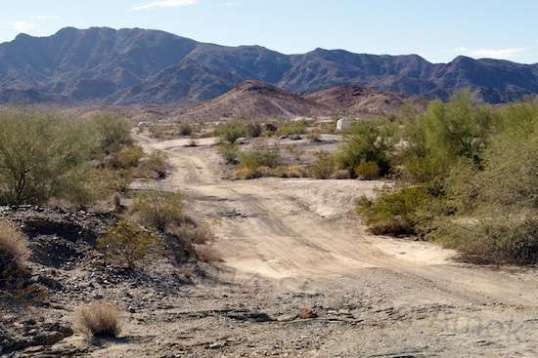 A nearby entrance road to a rather vast camping area.

Most washes are just sand or gravel and an occasional boulder. This one had a sizable formation of angled layers of rock, which I was also standing on.

About 3 feet up on one bank is a large scattering of quartz. Quite large pieces were below. 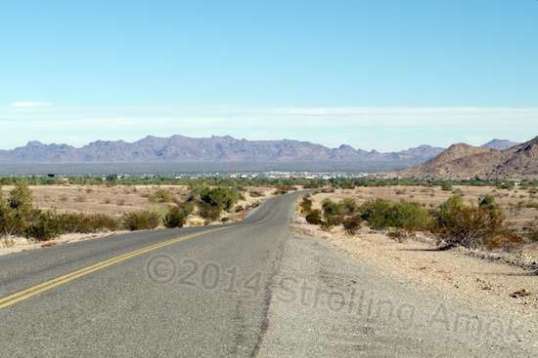 Yay! Quartzsite is off in the distance. 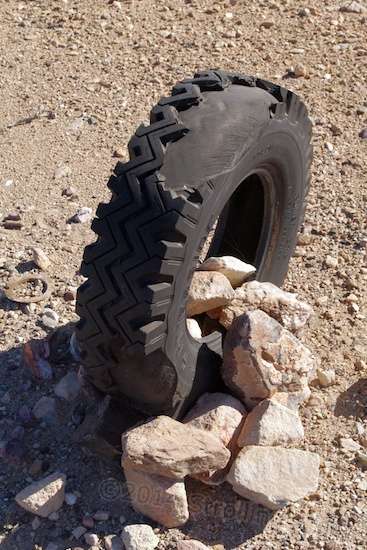 But before that is a sculpture of sorts that marks one entrance of a camping area.

I think this kind of stuff is fabulous, which probably explains a lot of issues, I guess.

2 thoughts on “You Can’t Get There From Here!”