The Solartech 10 watt panel is left loose to to keep it potentially efficient no matter what the parking situation is.

Having replaced the Ford’s dual batteries this year (for the first time), their cost was such that I decided to apply a small solar panel and charge controller to keep them topped up while the Ford sits unused for a couple of weeks at a stretch. Not that I can complain about getting seven years off a set, but if I can expand that without losing too much bread in the process, so much the better. Modern vehicles tend to use power when they sit unused, and the drain adds up over time. Starting batteries do not like

much over a 5% discharge, especially if it’s extended over time.

Yup, the wiring is mess. But it’s also out of the way. The wires going out the rear side window lead to the solar panel.

I’d actually had a similar setup last year, using a 7 watt cheapie Wel-Bilt panel on sale at Northern Tool, but it broke after being blown to the ground in a windstorm. I already have a leftover Battery Minder SCC-180 solar charger sitting around from my failed first foray into solar power, and its one benefit is that if it can manage to pump the battery up to 14 volts for awhile, it will kick over into a maintenance mode that includes desulphation. Sulfation, or the buildup of deposits on the battery’s lead plates, is what actually kills them. Keeping them topped up slows the sulphation rate quite a bit, and a desulphating charger is icing on the cake.

A Batteryminder SCC-180 solar controller is attached to the truck’s rear window with adhesive-backed Velcro. The little box below is Batteryminder’s version of a voltage meter.

When I found a high-quality 10 watt panel at Northern Arizona Wind & Sun for $50, I decided that it might well pay for itself in the long run, especially if the new Interstate batteries weren’t quite as good as the originals. It’s a rather heavy panel for its size, owing to thicker glass and a much more substantial aluminum frame. Rather than do a quality installation, I opted to jury-rig the thing and go for flexible/easy. Since all panel power is ultimately going to the Ford’s dashboard power outlet (and on to the batteries), I mounted the solar charger out of the way on the inside of the rear window. Wires to the solar panel are split with an SAE plug set I picked up a a local tent vendor in town, making it real simple to disconnect the panel and run the wires to whatever location I need, inside or outside. That gives me the option of placing the solar panel on the ground, the bed tonneau, windshield, between the windshield and the reflective sunshade on the inside, or just sitting flat on the top of the dash. Whatever. 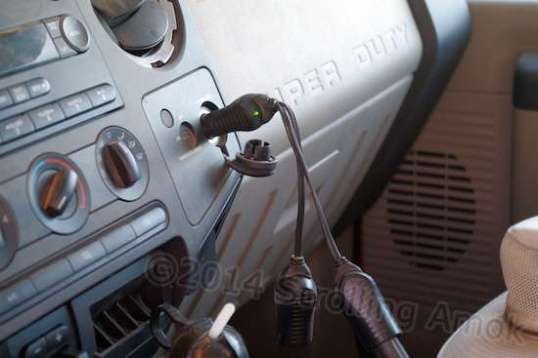 Connection to the Ford’s batteries is made via its power outlet on the dashboard.

The only issue is that, with so little wattage to work with on two rather large batteries, the panel will never reach 14 volts to go into desulphation mode on its own. Plugging the system into the power outlet at the end of an errand has a fighting chance though, since the vehicle’s alternator will have just topped up the batteries on its own, leaving the charger little to do but trip into miracle mode. As with so much else having to do with the Defiant, time will tell!

4 thoughts on “Just in Case”