A rest stop along I-35 in Osceola, Iowa is yielding a WiFi signal that actually is both open and operative. I’m parked at the outskirts of the lot and need to use the Hawking Range Extender to get a good hold on it, but it works and I’m attempting to update software on the iMac now, a process that this time is going to consume some 233MB of data. Don’t try that on your cellular data account.

This is an especially functional stop for overnights, since it separates RVs from the overnight noise of semi-tractors. The big drawback of staying at rest areas and truck stops is that many old-school truckers still let engines idle for prolonged periods or overnight. Most don’t. A few who don’t instead use an Auxiliary Power Unit that’s little more than a diesel generator in an enclosure. Those are quieter than a cheapie consumer generator, and louder than a Yamaha or Honda generator. The one that parked next to the Defiant last night had one with enough oomph that

I could feel the trailer vibrate in sympathy. The good news is that I was sleeping so soundly that I have no idea when it rolled in. It was after I’d gotten my 8 hours, thankfully.

Here, I can move the trailer down the long row of parallel parking for RVs to the end, which is well past the nearest truck slot. There will still be plenty of highway tire noise, but not the rattling idle of diesels a few feet away.

Who says there is no such thing as sin? There’s a 32-mile piece of I-70 in Kansas that charges a toll. The line was a half-mile long just to pick up a ticket at the start. Granted, it was smooth as glass and in good repair, but that doesn’t make it right.

Speaking of glass, I broke one the other day when I incautiously swung open a cabinet door right after parking for the night a couple days ago. It didn’t just break, but practically exploded. I was finding pieces all over, high and low within a five-foot radius. I swept up as best I could, moving stuff around for access and taking a runner and the sheet spread over the couch outside to shake them out. This kind of thing is why carpeting in an RV may be homey, but is still a bad idea. I have a tiny shop vac, but in the Defiant it’s unusable unless I’m hooked up to electricity in a commercial camp. I was pretty thorough, but am still finding shards and tiny bits – the hard way. 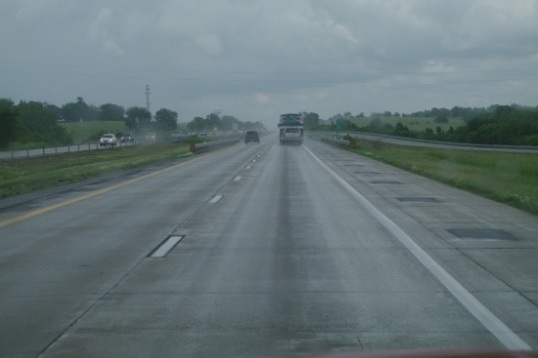 The above was a special moment for me. It’s rain, and at times, heavy rain. Glad the wipers still work, as they hadn’t been used for a long time. Driving the Furd on freshly-wetted asphalt requires some care, as I was reminded again today. A turbodiesel is a different animal from a gas engine, and I’ve always had to be careful accelerating on a highway entrance ramp to avoid a pronounced fishtailing due to wheelspin. With max torque at just 2,000 RPM, it doesn’t take much throttle at all to bring on some unwanted excitement. Bring on a little choppy pavement, and it gets absurd.

Today was a new variation. Rolling along at a constant 60 MPH on cruise, the Furd usually muscles uphill without the trans having to downshift. With the trailer on, steeper hills may require a one-gear downshift, and speed will never drop more than 1 MPH. As it was delivered in 2008, the Mighty Furd’s cruise control was VERY aggressive, applying close to full throttle when you tapped the Resume Speed button. Naturally, with some 650 pounds-feet of torque on tap, this is clearly suicidal in many situations, so the aggressiveness was dialed back with each software update to where it’s now pretty wimpy. Really wimpy, truth be told. It’s reluctant to accelerate, but will act to maintain a set speed.

And that was the reminder for today. I was on cruise going up a significant grade, it was now raining, and the truck downshifted one gear to maintain speed with the 7,000-pound trailer. Despite having a full 1,000 pounds extra on the rear of the truck because of the trailer’s tongue, the Furd spun one tire for a moment. Because of the unstable dynamics of the trailer on the Cooper tires, I was thankful for once that the Ford’s limited-slip differential is gimpy. If it had locked both rear wheels together as it used to, I might have had some serious excitement involving a long series of steering corrections on greasy pavement. As it was, the engine revved inappropriately for just a second during the downshift, and the rear tires momentarily gave out that “don’t do anything stupid right now” message as they got a little squirmy-feeling back there. All the mechanical inertia involved in the normal downshift was enough to break traction at 60 MPH at maximum rated GVWR. It was time for a Note to Self that included fresh rainfall and cruise control.

In a construction zone, the lanes going in the opposite direction were being replaced from scratch. 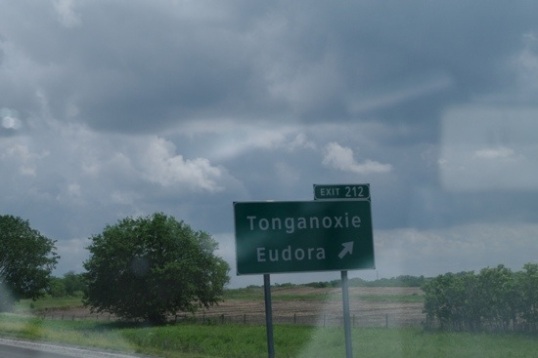 I couldn’t resist throwing in this town name sign. How would you like to give out your home address as Tonganoxie, Kansas? I had to wonder, and later found that it was named after a Delaware Chief in the area. The town, after a false start trying to name it after the female founder and saloonkeeper named Bury, as in “Buryville”, so honored the Chief at her request just before waving adieu to his tribe’s forced march to Oklahoma. As the town now notes, it was “a city formed off of friendship and trust between the white man and the American Indian.” Not long after they named it in his honor as Tonge-Noxie, they revised it to it’s current spelling. If he made it to Oklahoma, I’m sure he wasn’t surprised. The Delaware had had a long history of aid and cooperation toward the newcomers in the New World from day one, and this was their reward, same as everyone else save for the ethnic cleansings further north. The Tonganoxie school sports teams are the Chieftains, Warriors, and Braves, from high school on down. 0.4% of the town’s population is Native American at this time.

I have to say, Kansas overall has a lot to it, and is worth some effort researching if you have a few bucks to blow on museums, eateries, events of all types, racing venues, and what-have-you. They hand you a sizable booklet at the border, and it’s loaded with choices, many eclectic. That’s in addition to the natural beauty of the place, and the variations of same as you travel from one end to the other.