In Search of Pavement

A dawn, just like any other dawn, but one now beckoning the quest…

Just think of this as relating to the brick and mortar Retailing Mantra “Location, Location, Location!” Just what is it I’m parked beside? An early major US highway, and yet seeming to waffle between one lane and two, and between pavement and dirt with some gravel thrown on top. Following terrain, but with some filling in and some cutting away – with some of the lesser cutting into grades unnecessary for motorcar travel. It’s hard to tell just what this section of 89 was originally like. Its present inconsistencies make it a confusing mish-mash of contradictions, like building a series of top-quality, engineered concrete overpasses, only to link them with a dirt path made out of landfill debris. Was this a highway, or a piece of local trail pressed into service as a stopgap?

I had gone for a walk, picked up some indicators, and then picked up more during a drive on errands. Between that and running into a local on his way home in an ATV, “the circle is complete” as Darth Vader was fond of saying. So, let’s mix a few things together and see what we gots.

Nearly all of the roadbed is raised a few feet, since even paved roads don’t last long when subjected to occasional torrents of water crossing them.

This cut through a hilltop was puzzling because of the expense vs effect. The earliest cars had problems with hills for the first decade, about 1900-1910, but the unaltered hill would have been okay. It finally came to me that the cost would have easily been justified for horse and wagon, which would be all this road would likely see until commercial trucks or touring cars toward the end of WW I, maybe. Just my guess. 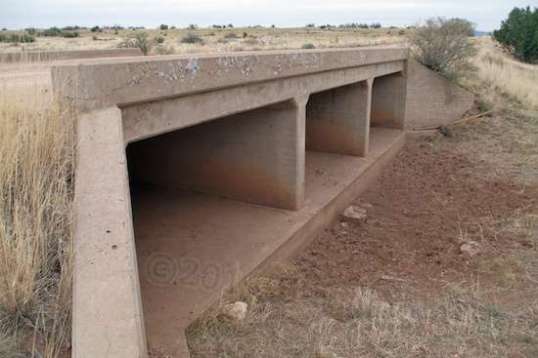 This is an unusually long overpass, but is typical of the style and build quality used throughout. This is serious stuff. You don’t spend money like this on a dirt trail or anything that’s expected to see minimal non-commercial traffic. 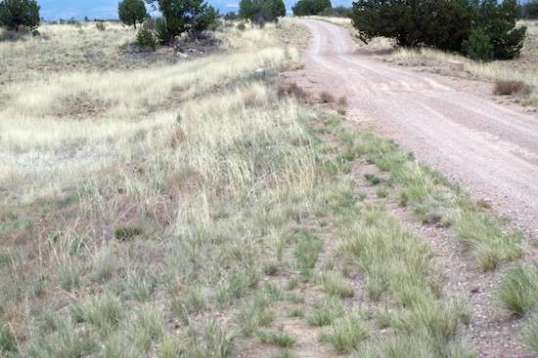 For the quality of roadbed needed for a major highway, this seems like way too much erosion for an area that sees so little rain.

While I marveled at the apparent loss of pavement, I also wondered if dirt and gravel had been dumped on top, making it look worse than it was.

I would expect to see straight creosote stains here rather than two levels of curved mud stains. Were these bridges left bare?

Remarkably little paving still exists. This two-layer chunk broke off and slid down the slope a bit. And, this was in an area that looked like it had never been paved.

A deep sinkhole showing no signs of breaking through any pavement, and a clean concrete surface with nothing but mudstains. Not a speck of tar? 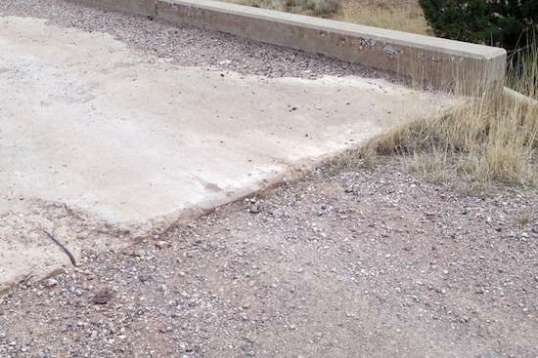 This was by far the most beat-up overpass, and the only one with a step-up to get to it. I would have voted for most of Old 89 having been left unpaved had it not been for rogue pieces of paving every now and then – but had those been dumped there from somewhere else?

Built-up areas measured just 18′-20′ wide before dropping away. That’s not a lot of width to avoid white-knuckle driving in two lanes. 9′-10′ lanes including the shoulder? 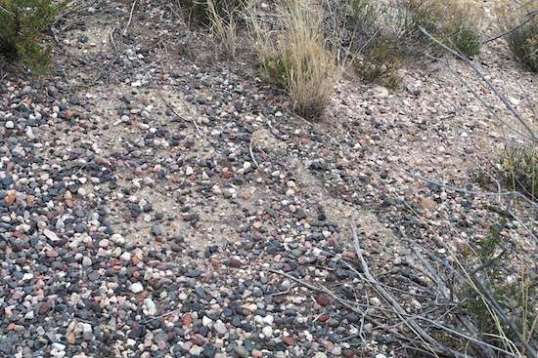 Regardless of what was happening on the shoulders (when present), pavement seemed to be 18′ minimum width. 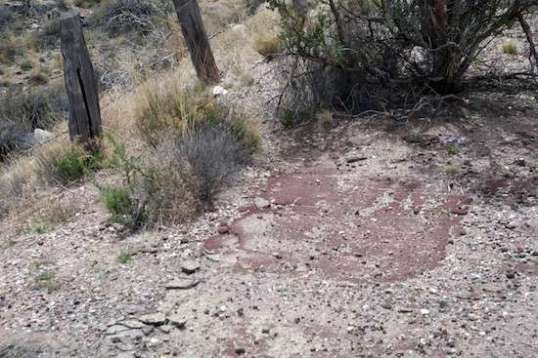 At the south end, the pavement was most pristine and measured 19′ across, giving me the feeling that the target was 19′, and it probably never went below 18′, if it varied at all.

These measurements are narrow for a paved roadway, but reinspecting it on turning around and heading back seemed to confirm it. The concrete overpasses measure 27′-29′ in width between buttresses, indicating that Route 89 had once been paved to 19′ at the south end where a lot of work was required to get it. Then as it went northward, it probably held that width. The concrete buttresses would allow for 4′ shoulders, but much of the road could not possibly accommodate more than 3′ extra. Driving the Ford where it felt at its comfortable limit toward the right of the 19′ roadway, still but me well over the center of the road. 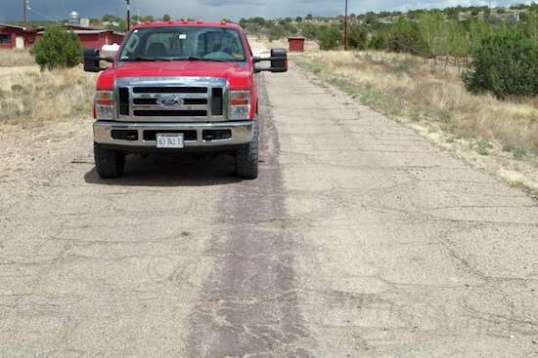 Driving as close to the shoulder as I cared to, the 19′-wide pavement just doesn’t allow for passing traffic at speed.

Highway. Cars and trucks going both ways, and nowhere along the entire span did I find evidence of anything wider, and much of this span was blind or impractical to see ahead far enough to act as a one-lane road. Then I considered the ubiquitous Model T Ford, which was fairly representative of automobiles of it’s time. They were originally designed to be able to follow wagon tracks or ruts without complication. The Model T car was 66″ wide, or exactly 5-1/2′. Even the Model AA, which was just under the wire as a real truck, was just 67″ wide. Heavy duty trucks were wider – and a rarity. The F-250 is 80″ wide not including the mirrors, or a spectacular 105″ with them. Oh my. Plus, you can’t see the right fender edge of it, or on most cars today, which makes it difficult to push the limits when having to crowd right. No such issues with the Model T and all other cars of that era and before, right up to the mid-1930s. The fender edges were in plain view. This section of 89, completely unsuitable today, was perfectly fine in its time. Two-way traffic? No problem!

But as I went back to the north end, two things still nagged at me. First was the sizable loss of those shoulders and some of the usable width along much of the road, much greater erosion than I would have expected in the time available. Second was that the south pavement was still there, albeit in bad shape. But most of the rest of it looked like pavement had never been there. No stains. The concrete overpasses showed no signs of paving having ever been on them. Had they paved up to the edges, on the same level as the concrete top surface? That would be odd, but possible. Had they left most of the highway unpaved? It certainly looked that way by appearance, but there were those small slabs of broken pavement here and there, and they seemed to match each other, ending my dumping theory. They were all two layers thick, the first having a reddish topcoat coloration, and the second a greenish hue.

This seems to indicate that pavement ran up to the concrete and stopped, and this was just a mile from the north end.

But close by, the first layer of pavement was level with the concrete, while the second was above it. Had the repaving topped the concrete surface?

Digging down through the dirt of one of the northern overpasses indicated that the gravel underneath was immovable. It was mud on top of disintegrated pavement!

So as it stands, my vote is that the entire length of Old 89 was paved to a width of 19′ average, with its surface abutting each concrete overpass. Shoulder widths varied from 3′-4′, but that’s to disaster of some sort, not the limit of a nice, usable shoulder. A second layer of paving was laid on top sometime later, and probably went right over the concrete. It was a real highway, and was kept in good repair. Roadbuilding standards having moved on since, when it was abandoned in order to start from a clean sheet, it disintegrated under the hot Arizona sun at a commendable clip.

A sure sign of pavement underneath, albeit in bad shape.

A brief talk with a local ranch owner passing in his ATV confirmed that the road had once been paved end-to-end. Whatever condition the paving was in now varied wildly from place to place, but it had once all been there and was never torn up. Nature took care of it. Why the huge variations? Well, being from northern Illinois, I tend to apply the most probable cause, rightly or wrongly. If this was Illinois, the cause would be the contractor’s use of substandard materials and techniques where he thought he could get away with it, then paying off the inspector to approve any tests of the finished article. With a bad roadbed and/or first layer, it doesn’t much matter what you do on top of that. It’s too late. How else can you get 1-1/2 lanes of dirt trail in a desert, after starting with two lanes and two layers of pavement throughout? The key is the variation. That’s my story, and I’m sticking with it!

And now for something completely different. The view up from the roadway between the walls of rock!

To me, these are works of art.

And I suppose that these might be drilled holes where dynamite was placed in order to create some space.

This is about as close to pristine as the original US 89 looks today, just beyond the south entrance.

And just a few miles north yields a very different view of the highway.

8 thoughts on “In Search of Pavement”