Your invitation to some great free 10-day campsites.

This will be a slightly odd post because my not-so-trusty Nikon pocket camera lost battery power while touring Mittry Lake Wildlife Area just when I was starting to record campsite variations. So, I have just enough photos to make a quirky article, but not enough to make a well-rounded one.

There are a few non-lakeshore campsites on the way in, level and large.

Mittry Lake Wildlife Area is administered by the Arizona Fish and Game Department, the Bureau of Land Management, and the Bureau of Reclamation. The free camping limit is just 10 days per calendar year, which makes sense when you look around and figure out what recurring campers would do to the site.

A tiny segment of Mittry Lake as seen from the boat trailer area. The boat ramps are to the right and a large picnic canopy is to the left.

One might think that this could be be a wildlife refuge, but it isn’t, not at all. According to the AZ G&F Dept, who says, “Mittry Lake has recently undergone rehabilitation work, including marsh dredging, revegetation and fish habitat improvement, making it an ideal location for small game hunting and sportfishing. Major species for small game hunting include waterfowl, dove, quail, and rabbit. The area is also very popular for nature study and bird-watching.” As far as I can tell, hunting season tends to occur over the popular winter camping season, so I personally wouldn’t venture very far into the weeds without being aware of what’s going on.

One of the trails leading away from the lake promises solitude.

What Mittry offers boondockers is both shoreline and hill campsites, and quite a few of them. None are designated, and they vary a lot in size and nature. You just kinda pick a clearing you like, and park it. And by park it, I mean right next to the water. Truck campers and vans will find themselves with the pick of the lot, while sizable travel trailers and motorhomes will be relegated to the few sites big enough to wedge into. Mittrey Lake is not what I would call big rig friendly. Few lakeshore sites or pull-offs are large enough for the Defiant or a big motorhome, and heading away from the lake on a side trail is a bad idea without scouting it first. Most sites may present leveling issues of varying intensity. I didn’t really pay enough attention to that on my drive-through, since with my TT, side-to-side tilt would rarely be a big issue here, and front-to-back can usually be adjusted out with the tongue jack. There’s certainly nothing to stop one from driving through to look for an appropriate open spot, though you may not find a large turnaround area until you near the south end exit. Would I try it with the 53’ Defiant? Absolutely. This is the kind of place where the only problem you will encounter is one that you make for yourself off of the main road. You’re going to drive all the way through anyway, gawking at all the great sites. 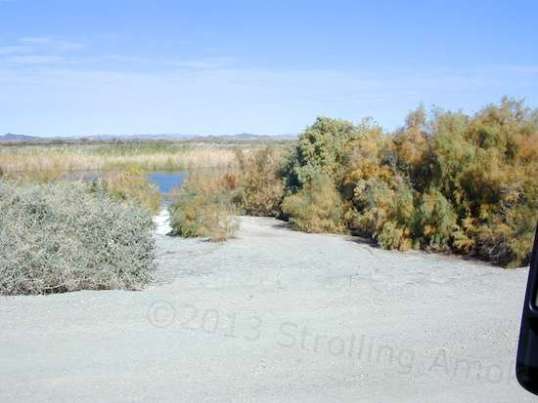 Wedge into this, and you have both water and reasonable privacy.

With an appropriate permit, you can break out a pole and fish for largemouth bass, flathead and channel catfish, bluegill, tilapia, crappie and carp. If you have a fishing boat, there’s a big three-lane launch ramp, long-rig parking area with ADA approved restroom, and many waterways to choose from. Once you view a few people quietly fishing in the channels, it may tempt you to get your hands on a small boat or similar device yourself. Fishing success seems to be very much dependent upon month tried, and you may not have a lot of luck until the water warms in March, which is a bit late in the snowbird season. Doesn’t stop you from trying if you just enjoy sittin’ out there enjoying the surroundings and, like me, occasionally wondering where the fish went off to.

Not the best as far as water access, but it is large and level. The majority of sites were excellent for water access, and small.

Pack in/pack out is advised. There’s a trash dumpster at the ramp area, along with a couple of wide handicapped-accessible parking slots both beside the ramps and up next to the restroom. The BLM website on Mittry also claims that there’s a handicapped-accessible fishing jetty. I didn’t notice it, but then, I wasn’t looking for one, either. No potable water, no dump station. It’s just a place to stay and enjoy.

A sort of quarry area at the south end provides a generous turnaround area.

To get there from 95 southbound, take East Imperial Dam Road to just past the second Army Base entrance, then left (west) toward the lake. There’s about 5 miles of bad washboard to get to the usable areas. You may breeze over it with a car or 1500-class truck, but it’ll rattle the windows of anything with a stiff suspension. The only choices are to either idle over it forever, or fly over it at 35+ MPH. The latter is not a good idea with anything but a bare vehicle, since anything inside will wind up seriously rearranged. Mittry is 600 acres of water and 2400 acres of land, so it’s not a quick tour. It is much smoother to approach Mittry from closer to Yuma. Avenue 7E goes north 9.5 miles from 95 westbound, before the pavement gives out. The entrance is just another 1/2 mile. Personally, with my TT at just 10 MPG, I’d drive the extra distance down 95 past where it bends westward, just to approach from the south on Avenue 7E. Less trauma when I stop and open the trailer door. 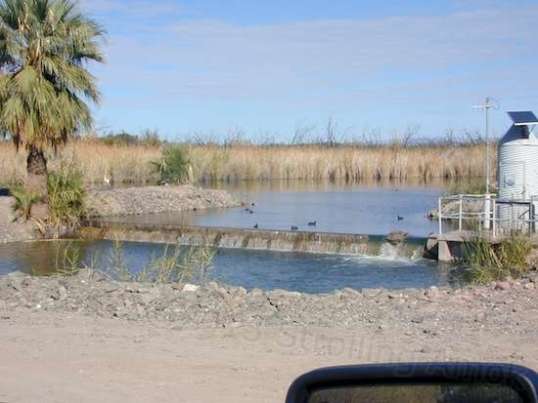 The entrance to Betty’s Kitchen was restive, with wild ducks and a white crane.

For more information about Mittry Lake, the BLM website is here, and the Arizona G&FD site is here. 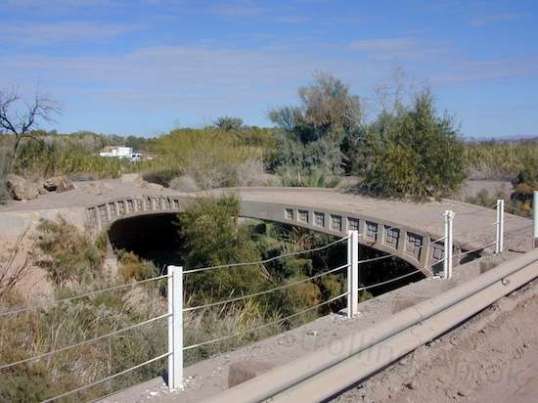 This threw me at first – an old concrete bridge proudly wearing 40 swastikas! At center are the initials “U.S.R.S.”

Turns out the swastika symbol is ancient and has always been the equivalent of an emblem of goodness and prosperity. It was co-opted by the Nazis in 1920 and has remained tainted as far as Europe and the U.S. are concerned. Before that, the public’s longstanding interest in ancient civilizations and symbols led the United States Reclamation Service to decorate the bridge with emblems of historic lineage and permanence. Oops. 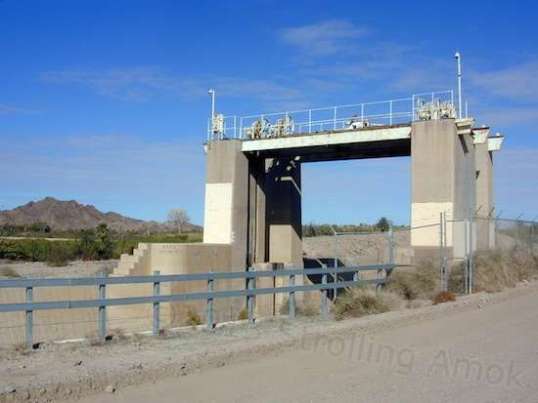 An indicator of the bridge’s age is cast into this abandoned sluice gate a short distance away: 1907.