The Case of the Failing Fridge 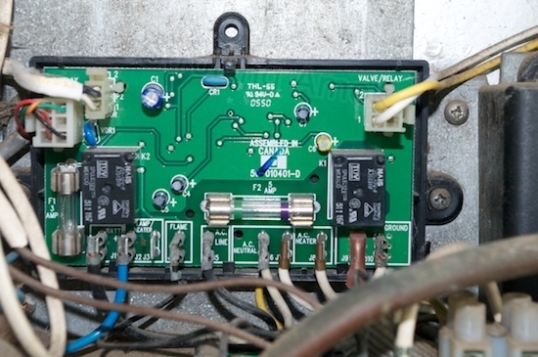 The nerve center of the 1994 Dometic Model 2611 refrigerator freezer.

I could put it off no longer. I hate doing repairs where the odds of screwing up guarantees additional cost. The Enterprise’s fridge was sporadically shutting down when fueled with propane, and the only signal was a “check” LED light on the control panel. Fail to notice in a timely manner, and your food supply is at risk.

Word on the Web was that the problem was common to Dometic units, with the most common mantra being that any failure of a ground wire or any connections to the board could trigger a shutdown. The purported solution was a replacement board made by Dinosaur Electronics, which was specifically geared toward a double ground connection. I ordered and promptly received one a month ago, but hesitated to get into the actual repair work. But, the time came when I had to step up to the plate, because I’d need to let it run for quite awhile to made sure that this was in fact the fix.

After struggling off and on for an hour to solve the mystery of just how to remove the OEM protective circuit board cover, I finally succeeded. Dinosaur Electronics was careful to provide a schematic of old and new connections along with its installation instructions, but it quickly because apparent that my Dometic board did not fully match the schematic, and was different enough to invite disaster. What to do? It was now about 4 PM.

I went to Dinosaur’s website and clicked on their customer service form to send an e-mail. That merely sent me to a page declaring an internal server error, which means that e-mail was out. What the heck. I dialed the tech help phone number and it was immediately picked up by a gentleman who turned out to be the founder and owner of the company! As he explained, only he would be crazy enough to still be in the office so late on a Saturday. Saturday! I’d lost track of days and had thought maybe it was Friday. This was momentous! But there he was.

I explained my dilemma, assuming that the board I had was some no-name replacement patched in along the way. Not so, he explained. What I actually had was a fairly rare OEM board, now vintage, made before Dometic issued an engineering change that led to the “bad ground” boards that followed. It seems that my board had proven so problematic that Dometic, without publicly acknowledging anything, simply changed the design to one that they felt would work more reliably. It only partially shared connections with the later boards. There were so few of my type of boards left that Dinosaur had not bothered to issue a schematic that included it, but I think I convinced him to get one of his boys to make one up, because he did say that they still got plenty of calls from customers confused about how their old board didn’t match the schematic supplied. They sell a ton of boards, so even a few percent means a lot of calls that could be prevented by one more page of instructions.

This guy basically told me more about my board and the industry than I ever wanted to know, but in the end I had specific point-to-point wiring instructions to replace old with new. There was no excess of wire lengths inside the outside-access compartment, but there was just enough to allow transfer of the connectors one by one. At my hesitant pace, it probably took less than five minutes. I hooked power back up, and nothing smoked or threw sparks. I fired up the fridge, and it seemed to operate okay. Now, several days later, it’s been running like a…well, like a refrigerator. I keep a special thermometer hanging inside the lower compartment, and temps are just as they were before, which is good. I’ll need a couple of weeks of running to feel completely good about the Dinosaur board, but it sure looks good so far! I of course hated the $100 replacement cost, but the greater reliability will have easily paid for itself within a couple of years (in ending prematurely spoiled food). Bon Appetit!

4 thoughts on “The Case of the Failing Fridge”