A club of Lazy Daze motorhome owners gathered for a few weeks in the LVTA, and recently thinned out to half in just one day. Movin ‘on, I guess.

After a very heavily-attended opening weekend, with parked cars clogging the roadway shoulders and visitors clogging the Big Tent, attendance at Quartzsite’s Big Tent Show declined by half on Monday and was a trickle by Friday. You can refer to my earlier article to find out what the heck the Big Tent Show is about. Two days later, the vendors cleared out on schedule. The La Posa LVTA where I’m staying had a nice pack of motorhomes jammed into the northeast corner for easy access to the shows. That started to peter out after the show ended, and not too many of these extra vehicles are left a week later. I’m still seeing more campground action overall though, with RVs rolling in here or there to stay for a few days or a week before leaving.

At the busiest time, groups of campers moved in together, and then departed together. That’s popular.

Also popular are ATVs or quads. They’re all over out here, and now and then you’ll see a conventional tube-frame dune buggy. They like to go out in groups to tour the area, and Quartzsite allows them on the city streets as well.

One thing that hasn’t thinned out is the airspace. Three ultralight fliers have been buzzing around for a few weeks, and appear to be encamped east of Quartzsite. Once every second or third day, I hear one or two buzzing the campground on its way to the mountains just west of here. They wind through the valleys in the mornings, before any wind has a chance to develop. I’ve seen them cruise past about 300 feet off the ground and going around 30 MPH at best. They then climb as they approach the mountains, and eventually disappear behind them. The views they have must be spectacular!

An ultralight making the climb to approach the nearby mountains. 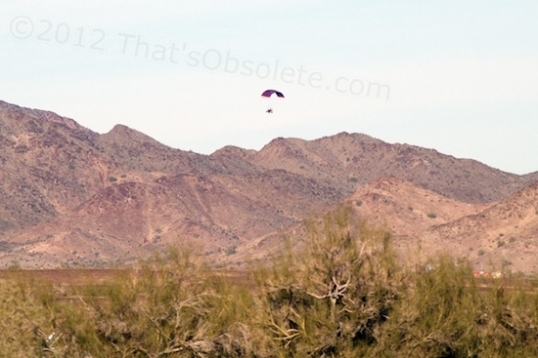 The pilots usually tour the valleys but also follow the peaks now and then.