The campground finally saw some action a day or two ago as RVers with money to burn rolled in and clogged the smallest area of the La Posa West LTVA that was closest to the show tent next door. Other areas show a little more density, and even my section now has a large fifth wheel and travel trailer on one side, and a mixed group of four units circled like a defensive wagon train. They each have an assortment of ATVs and/or trail bikes, and enjoy touring the area. Still, I’d have to estimate that as a total site, attendance must continue to be way down from prior years.

Surrounding the Big Tent were still more purchasing opportunities, and a place to see many big-ticket products not available elsewhere.

That doesn’t seem to stop the vendors so far though. The “Big Tent”, a huge vinyl structure was still packed with vendors and visitors, and the range of alleged health products, RV-related equipment, camping resorts, and prepared foods was impressive on opening day. As always, the sheer number of dealer’s motorhomes and fifth wheels parked on the surrounding lots was staggering. Unlike the motley assortment of vendors that surrounded this area, there were good deals and “show specials” to be had if you just looked hard enough.

I’ll probably never be able to get an honest answer, but I’d like to know how motorhome sales fare here.

One product that was offered was one that would have been nice to have on my trip down here. The Axle Crutch is a simple gizmo that allows an RVer with a tandem axle trailer to soldier on in the event of a broken spring or destroyed wheel bearing. Normally, when a bearing fails (and I can attest that they do), the RVer must stop beside the road and call for assistance, hoping that the towing company called has the proper equipment to support the bad wheel in order to pull it to a repair facility. They often don’t, especially in more remote areas.

The Axle Crutch is not an exciting product, unless of course you have a suspension or bearing problem on the road. This photo is from the Axle Crutch website.

Armed with the Axle Crutch, one can simply jack up the offending axle as if to change the tire, remove the wheel, and install the device fairly easily. It slips into the vertical gaps inside the spring mounts and holds the axle up using a short length of chain, which keeps the brake drum well clear of the ground once you lower and remove the jack. The result is that you can now continue on with three wheels to the nearest repair place you can find. Of course, the remaining tire and bearing on that side of the trailer are now badly overloaded, so it would not be a good idea to go any further that you have to, or to go at high speed because if the remaining wheel bearing blows out from the stress, you’re done for the day.

The Axle Crutch is one of those products that is a “must have” for people like me. I’m giving it a few days before I opt to buy it though, even at its “show special price of $99 plus $10 local tax (MSRP is $149). That’s still a load of money for a length of square tube, a bracket, chain, and a few fasteners. I’ll probably peruse the hardware store to see whether cobbling one up is feasible, but there is the issue of tube wall thickness and strength to wonder about. Meanwhile, the Axle Crutch has been tested to hold its own up to 3,100+ pounds pull, which is at worst double the actual load on it. Gimme a few days.

UPDATED PARAGRAPH: In case you’re wondering, although the Axle Crutch is a patented device, it is perfectly legal for an individual to fake up a similar gizmo for personal use. You just can’t offer it for sale or try to commercialize it in any way. That would be illegal. There’s an almost-interesting background in the case of the Axle Crutch, however. It was invented by an RV repair guy in the late 90s and a patent was issued in 2001. Unfortunately, the inventor promptly died, and no one paid the ongoing (and onerous) fees to maintain the patent, so it expired in 2005. That would ordinarily throw it into the public domain, which would be a big problem. However, further research into the patent’s history at the USPTO reveals that the Patent Office accepted a petition to accept late payment a year later, so it’s still in force.

So what, you ask? The inventor’s son has recently decided to commercialize and market the thing, and is now hoping to develop a going market for it. That market would be RV towing companies and RVers who know what it feels like to have axle/wheel/hub problems out in the middle of nowhere. I hope he does well and is able to make some headway in the market before one of the Big Boys in the industry can legally create a cheapie knock-off, copycat design and try to take over. I’m not so sure this is the type of product that you want to “take the cash out” of, anyway, compromising either the strength or ease of installation.

Just so you know, I did ultimately purchase an Axle Crutch, and it’s surprisingly hefty for its compact size. At the show, Axle Crutch’s President Rick Armstrong told me that they’ve bench-tested the thing to well over 3,000 pounds load, and I found it reassuring that it’s one of the fasteners that starts to deform first, not the main crossbar. That baby ain’t going anywhere, and it’s one of the main reasons that I decided to ante up and buy, rather than McGyver something. My own rendition using untested, mystery-grade components would have to be more difficult to install anyhow, because compensating for low strength by altering the load points takes up more space and potentially messes up the Axle Crutch’s simple plug-n-play installation. More importantly, even if an improvised device does manage to hold the axle up on a test install, it means practically nothing. Stresses on the device will vary all over the map once you’re towing down a bad road. Bottom line: sitting roadside with a blown wheel bearing in Nowhere, USA is no time to find out that your mild-steel hardware store fake-up doesn’t cut it after all. Don’t have access to a multi-ton hydraulic force tester with gauges? Then buy the Axle Crutch and stow it away where you can find it when you need it. Do not assume that the towing company sent by your RV roadside assistance insurer will have suitable equipment. If you tow long distances like I do, the issue is when, not if you will need it. I just wish I’d found it sooner. 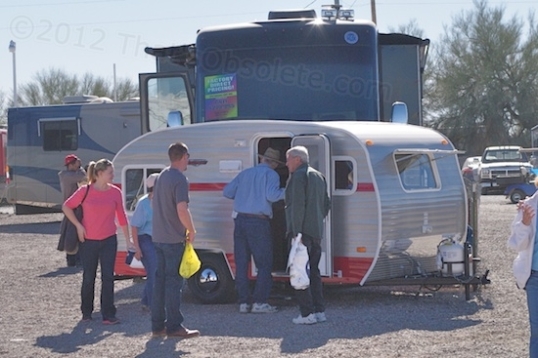 Surrounded by $200K motorhomes, this little cutie got a constant stream of action. 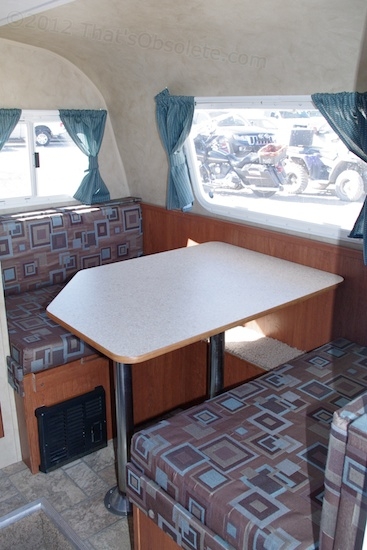 The forward end has a workable dinette, and a tiny wet bath is just to the left. No sink in there, just a shower and toilet. You wash your hands at the kitchen sink. 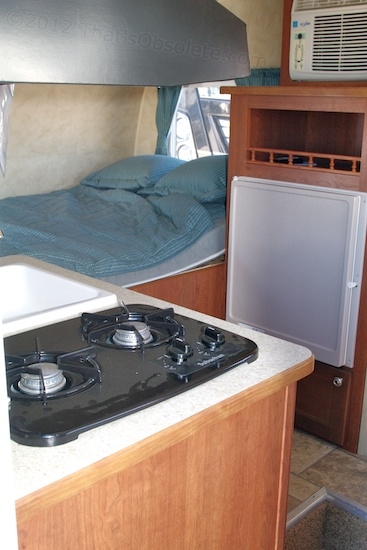 The back end has a kitchen and bed. A center step-down floorwell allows standing upright in the main area. Most everywhere else is a sitting or lying area anyway.

Dubbed the White Water Retro, Riverside RV makes it and many variants.