Spitting Against the Wind

As you read last, I was looking forward to an interesting day today, and I got one. It happens not to resemble what I had in mind, but it has been interesting. 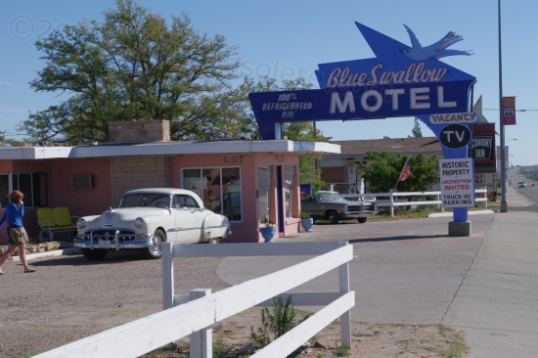 Tucumcari, NM does have old 66 running right through it – four lane’s worth. Not much traffic at all, either. It’s referred to as Historic Route 66 down here, and despite Tucumcari’s need to have an actual functional business district, there were a few restored motels along it. They were outnumbered by the quasi-restored ones, though. One had painted murals of James Dean with the Porsche that killed him, as well as some other Hollywood movie stars. Interesting, but not true retro. I noticed that the pavement on many side streets was completely free of potholes and patching. However, it was smoothly disintegrating from sun exposure. The tar evaporated while the gravel remained.

I toddled on through the length of the strip in town, stopping to take a few photos, then drove west on 66 along a simplified map of the county. 66 is not marked or identified on any road signs while you are actually on it, so forks in the road are problematic, especially when what seems like the obvious way to go has a Dead End sign on it. With 31 feet of trailer behind, errors can involve some effort. The road crossed over I-44 and immediately went over some cattle barriers – grates in the road that cattle will not cross because of fear that their hooves will drop through.

The pavement was fairly new and yet pretty rough: 30 MPH was about as fast as I could go without getting jostled around by the Super Duty’s suspension. I hated to think what was going on in the trailer behind me. But, I slowly moseyed along without fear of blocking traffic, because there wasn’t another vehicle in sight. The road had I-40 on one side, and scenic buttes and cattle ranches on the other. Only the promise of picturesque, deceased gas stations kept me going on it, mainly because there was a very stout headwind going – I was getting 7.3 miles per gallon at 30 MPH, and the turbo was solidly engaged uphill and down. This was even worse than a couple of days ago! At points, I could do no more that 20 due to the pavement.

I’d wondered about the wind earlier, when it almost took my cap off and slammed the truck’s door closed while I was taking pictures in town. It had been forecast at 20-25 MPH from the west. If it’s less than 35, I’ll eat my shorts.

Anyway, 66 quickly rejoined I-40 and then split off again ten miles down the road. It was notable that at 60 MPH, mileage remained at 7.5. This 66 section meandered about to avoid sharp terrain, and went up and down for rainwater gullies. According to the brochure, time was when the county kept equipment around to pull cars on 66 out of the standing water and mud. I believe it. Now paved, even this fairly new pavement clearly showed mud stains at each low point. It impressed me just how 66 meandered about, and how narrow it was. There was lane space for the 8.5′ wide trailer, but that was it. The pavement beyond simply ended in dirt and scrub, or a steel guard rail running right beside the lane marker. At times, it either crossed over I-40 over a bridge, or went unpaved and dove into the earth in a sharp turn and went below it. As I went further west, the pavement smoothness improved up to 40 MPH for brief spans. In all, I took about an hour to travel 30 miles on 66.

It’s hard to tell if the gas stations I found in the abandoned towns of Montoya and Newkirk ever had any surrounding homes or shacks. I assume they did. In all cases, whether 1920s or 1930s in origin, everything of even the slightest scrap value was long gone.

Was this section of old 66 worth it? With a car or softly-suspended SUV, yes. With a serious pickup and travel trailer, no. On rejoining I-40, I quickly realized that I’d pay a king’s ransom in fuel to get to Grants, NM at 7 MPG: some 26 gallons at $4.20 each to cover a few hours of driving. Crazy. So I got off at Santa Rosa, the nearest “big town” exit, and called it a day at a Love’s truck stop. You can imagine the clerk’s facial expression as I asked at 11:30 AM for permission to stay the night.

I backed into a slot and opened the camper to find that I had failed to clean out and stow the coffee pot. Oops. Took awhile to clean up the wandering coffee and drag the rug out to rinse with water and let dry in the wind. 66 had caused some unusual shifting of contents, but nothing worth mentioning. The solar panels had stayed in position perfectly. I hung the rug on the bike rack to dry, and will bring it back in later if it hasn’t blown away. So I sit here in the rocking trailer, listening to the aluminum roof drumming in the wind as I type. Tomorrow’s forecast is a 10 MPH wind, so I’m going to stay here, walk a bit, and read a book.

Murals don’t help the retro look a bit, but they do get attention. 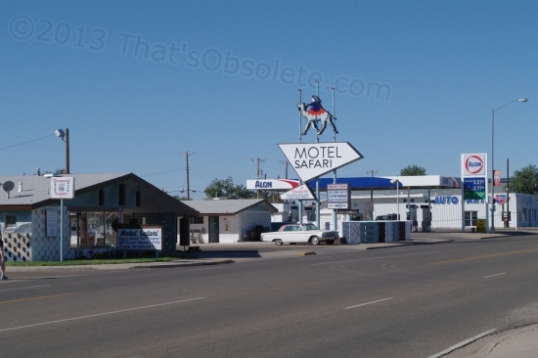 Here’s how to make dead businesses a tourist attraction: leave them intact and let them age.

…And add something eclectic.

A vintage hippy RV, I gather.

A drive-in that is no more.

Coming out of an underpass that links two pieces of 66. 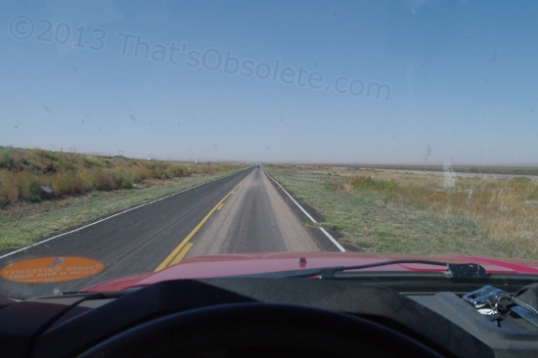 This is what the smoother parts of 66 look like. 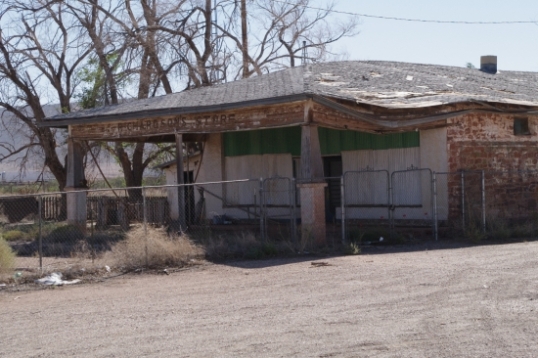 I’m looking at a tiny square as I type, but I think this is the Richardson Store in Montoya, built in 1908. 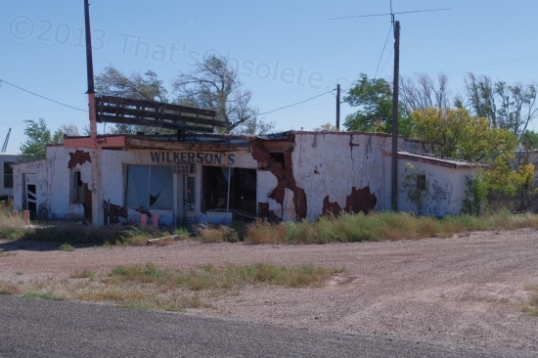 Wilkerson’s in Newkirk was a service station with a 4-unit tourist motor court. Newkirk was a railroad town. Not any more, I reckon.