A Gathering of Thanksgiving

Well, naturally, I took a much-needed nap at 1:40 in the afternoon and woke up at about 3:30. Uh-oh. So much for a little catnap. I was late to the Thanksgiving gathering at Bob Wells’ campsite. Fortunately, the barbecued turkey succeeded wonderfully, and although they were just hitting the desserts by the time I got there, there was plenty enough of the staples for me. What a spread!

They also had pumpkin pie a la mode for one of the desserts. Oh my. Are you sure this is camping? Roughing it?

Life is hard out in the desert.

There were just short of a dozen people gathered ’round, mostly vandwellers, mostly full-timers, who were asking me questions about why I decided to pull up stakes and live in a travel trailer full-time. I had it pretty cushy next to this hardy bunch, but the basic motivations still applied. That also prompted them to go on from there and share their own perceptions of this unusual lifestyle. Most people don’t understand it, viewing it as dropping out of normalcy and becoming

a part of some type of vagrant rebellion, but it isn’t that simple or that accurate. It’s a lifestyle based on personal freedom, a very deliberate choice of simplicity, and if you don’t personally know someone who has done it, they may often be written off as a group of some sort of undesirables or weirdos or dropouts.

Just the opposite is true. I’ve found that they are people worth knowing, and knowing well. Whether man or woman, they’ve each invariably done a great deal of thinking about mainstream values and “normalcy”, and adapted their lives to a greater call – one of thoughtful living. There’s a lot of accumulated wisdom lurking here, both inspirational and practical.

After stuffing our guts, at 4:30 half the group walked toward a mountain range before the sun would set at 5:30, talking and keeping an eye on the three dogs as we wandered down a rocky trail. Should have worn more substantial walking sneakers and brought my walking stick for the ultimate in comfort! Nonetheless, we watched the dogs unsuccessfully attempt to run down an errant rabbit. I felt sorry for the poor little bunny of course, but to my surprise, the little critter quickly left these good-sized dogs behind. One of the dogs, an elderly airedale, had a bad hip that magically seemed to disappear as the rabbit flashed into view. Such is the effect of adrenaline though – he was hopping on three legs when he returned, but he didn’t seem to regret the chase one particle.

We returned to camp just as the fading glimmer of sunset took hold. I felt it was time to take my leave, and bid them well. But I did so with the conviction that I need to live not merely to escape what hasn’t worked, but to expand my horizons and appreciate life in a more considered way. Quite a bit of value to pick up from a mere two-hour casual Thanksgiving visit.

This is is simply one of many views we had on our walk. 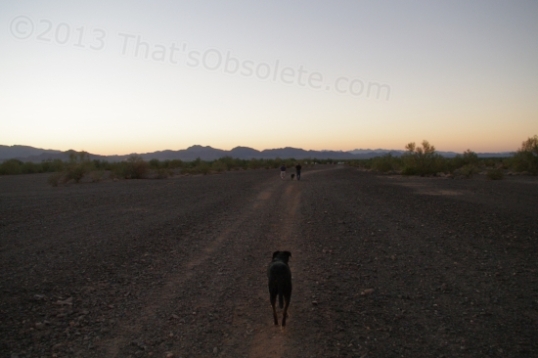 And this is one of the dogs, of course leading the way back to camp. They always want to do that.

One camper, Steve, had the high-zoot solution: a 4WD van. Pressed hard, it might go where my F-250 can’t.

You have to be pretty committed to this style of living in order to be comfortable with it. You’re looking into the stubby kitchen area, and the bed spans the back. Makes my 26′ travel trailer seem mighty cushy in comparison! 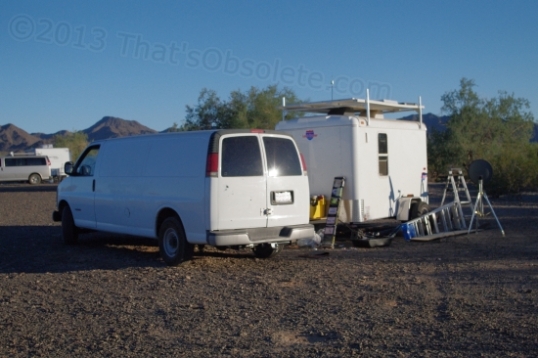 Bob’s own setup is above. He lives in the trailer, and uses the van for storage. Notice the satellite TV dish! He was afraid some of his readers might give him guff for veering off the Minimalist path to righteousness, but he likes watching TV at night!

This is simply the other side of Bob’s setup. These guys have guts. My Inner Packrat shudders at the sight, but I am impressed.

2 thoughts on “A Gathering of Thanksgiving”