Archive for the tag “equestrian”

The departure out of Wickenburg.

Each year since 1947, an event called the Desert Caballeros Ride takes place. An invitation-only event, it provides a couple hundred riders the opportunity to ride and camp in the surrounding mountains for five days, and then it’s over too soon until next year. This year’s 180 riders will split into groups of forty and move between three camps over about 100 miles before returning. This now-historic ride has inspired several others in the area, including one exclusively for horsewomen (who showed their more civilized natures by chipping in for a portable shower).

A few local horses were individually trailered in, and this one of them. What a beauty.

So, what I’m presenting here is not a parade through town, per se. It’s simply the orderly departure of some 180 riders heading off for the desert. As Wickenburg is at the juncture of two state highways and lacks a suburban-style network of roads, these boys clog up this town quite effectively for fifteen minutes or so as they head right down the main drags. You’d think the town’s police would view it as an annual nuisance, but not so, not from what I saw and heard. The ride is a part of Wickenburg’s proud heritage, and the town now depends substantially on tourist and vacationer dollars. Although there are other equine events, any loss of interest in this ride would directly impact the town’s ability to promote itself. If anything, it’s in Wickenburg’s best interests to protect and promote it, and that attitude is apparent in the officers having to reroute through-traffic with minimal delay to everyone involved. I was impressed. Calm, confident and friendly, without a hint of grumpiness. 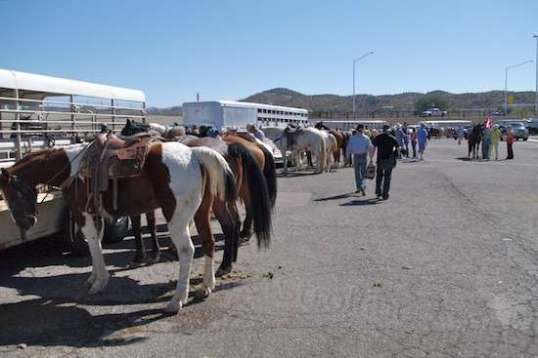 This shows most of the trailers, but let’s just say there was a heap o’ horsies.

More than a few of these riders have been heading out for a couple of decades. Many are local, many are not. The age span runs wide. It’s apparently a good time, and once you’re hooked, there’s no way you’re not going next year. I was able to tour the Community Center’s parking lot among a half-dozen long, long horse trailers, and here is a little of what I saw.

This critter may not win the running or barrel races they hold out there, but he’s still impressive.