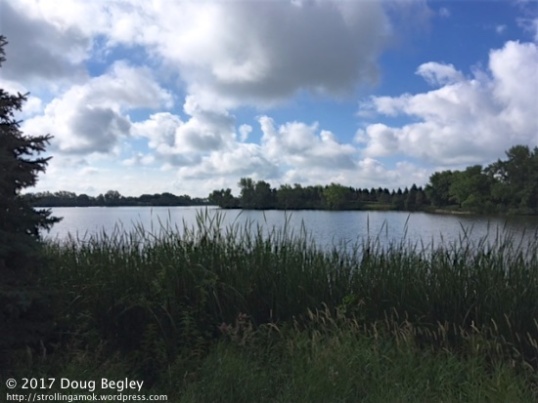 Minnesota has no shortage of pleasant scenery.

Since I’m here in Butterfield, Minnesota for awhile more to wait out the heat wave, I thought I’d show you a little of what’s here. Athough the village of Butterfield is a one-horse town with businesses you can count on one hand, the houses are substantial, their yards treed and well-kept, and the people are friendly and welcoming. Biking around town is a pleasant silence, with nary a barking dog to be seen or heard. That’s unusual, in my experience. 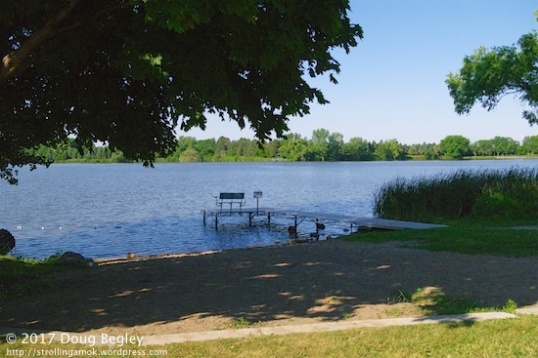 This pier and boat launch is on the park-side of the lake. a sand “beach” has been added, with a tiny swimming area being roped off.

The campground is vast, and before long is expected to be packed to the gunnels with participants and attendees of the upcoming threshing bee. The park grounds have quite a number of large buildings made by local hobby clubs, as well as many old, semi-historic buildings that have been relocated here and re-purposed. Judging from the other campers here, Voss Park is used as a family-friendly gathering place for other surrounding small towns. 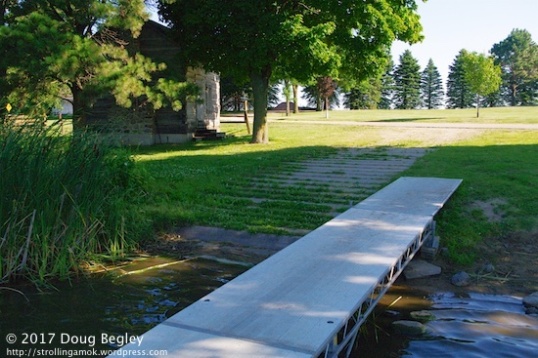 On the pier, the cenent slab boat launch is a deluxe setup, except that erosion has dropped a slab and made ramp usage a very challenging go.

There’s a different culture here, a different atmosphere. As I’ve made my various tours elsewhere, the norm is that those tiny towns have obviously suffered attrition, with empty storefronts and run-down houses. Comparatively speaking, the towns I’ve been through on my errands here may have a main drag only a block long, but what does exist appears to be doing just fine, thank you. People are out and about, and franchise businesses which typically trash all the local establishments are comparatively rare, so one can still find such things as bakeries and stationary stores. The ghost town syndrome so prevalent elsewhere hasn’t hit, and the people will greet you as you wander about on the sidewalks. You may have to travel some distance to get a particular product or service, and the selection may be limited by the lack of mega-stores, but it’s all good. There’s almost a historic, traditional feel about it that is somehow familiar and comfortable. 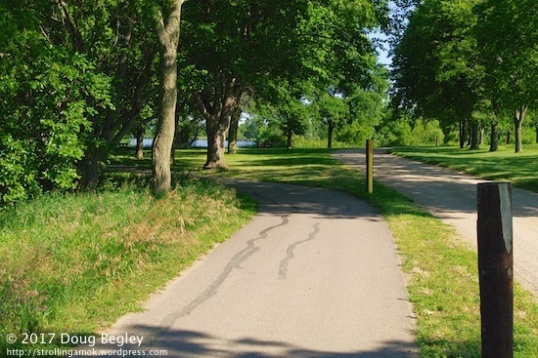 The path. The gravel road to the right is one of the access roads to the event area.

Voss Lake is ringed with a smooth, paved walking/biking path about a mile and a half around. It makes for a pleasant 2-mile walk in the morning, before the heat of the day sets in. That’s often been crimped by frequent thunderstorms and overnight temperatures that never get down sufficiently, which makes me appreciate the non-claustrophobic floorplan of the little Four Wheel truck camper. I recently rolled up to one of the many RV dealers on my way to St. James in order the pick up a water pressure regulator to replace the failed one I had. No flow. The salesman seemed almost startled that I was A] not a local and B] could stand being inside an 8-foot box for 7-8 months a year without going nuts. That last point is debatable of course, but we’re talking in terms of simply remaining coherent. So far. 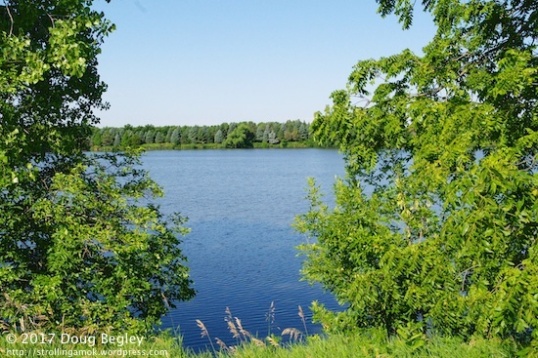 Direct access to the water is pretty much limited to boat ramps, but the lake is nearly always in sight of the walking trail.

The heat wave is of some concern. Looking at long-term forecasts, there’s no end in sight, and continuing according to plan puts me in huge areas that are considerably hotter than where I am now. Drought and smoke particles from major forest fires in California and British Columbia are crapping up the air as well, something which is okay for awhile but an issue long-term. So as planned, this year’s tour looks to need some radical adjustments. I can head for Colorado’s heights, or possibly New Mexico’s, as the latter looks to be the only state forecast to have normal temperatures predicted. Time for some online research in order to salvage the bulk of this Illinois-to-Arizona run! 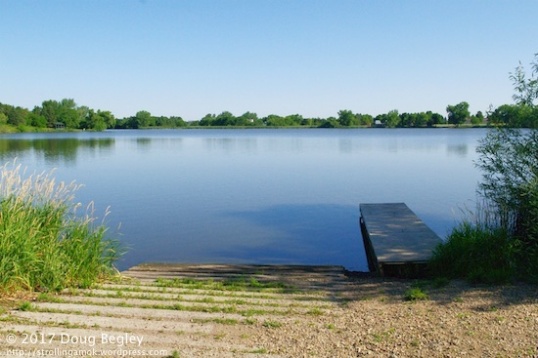 Another boat ramp on the other side of the lake is fully usable. 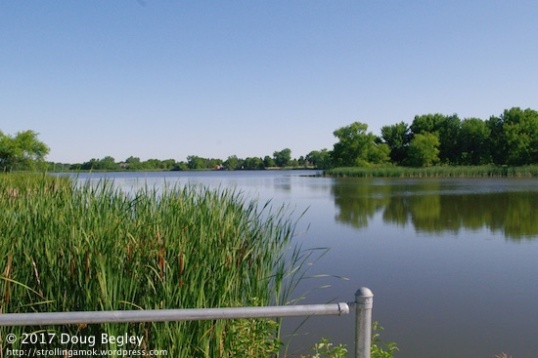 I’m on a crossing between the lake and an adjoining marsh area. I could frequently hear fish jumping for insects in the weeds. In one spot, I could see small catfish just under the surface. 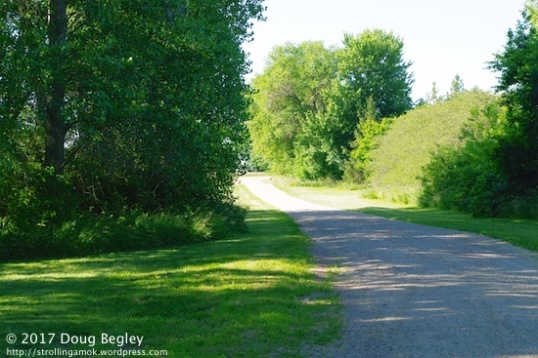 More trail. Farmland surrounds the lake borders, which is no big surprise.

An early log cabin, restored by volunteers in 1988, is beside the first boat launch. A water pump and stock pen are to the right side. 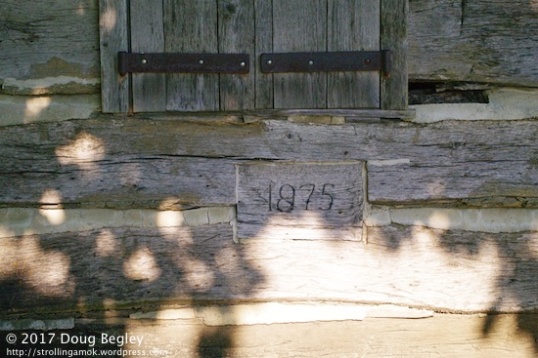 As you can see, 1875 is the date. A nearby grinding wheel powered by a windmill is from the same period. 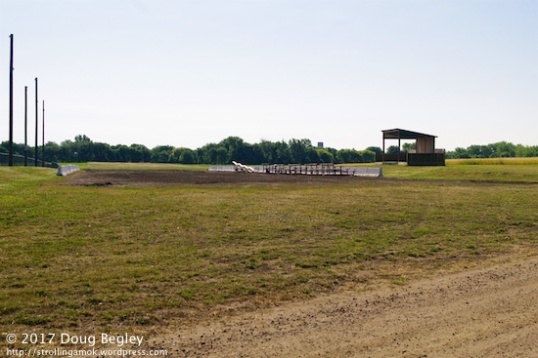 Oh hey! An area for a tractor pull! There’s a farm equipment dealer in nearby St. James, but all of the rigs I’ve noticed so far are vintage.