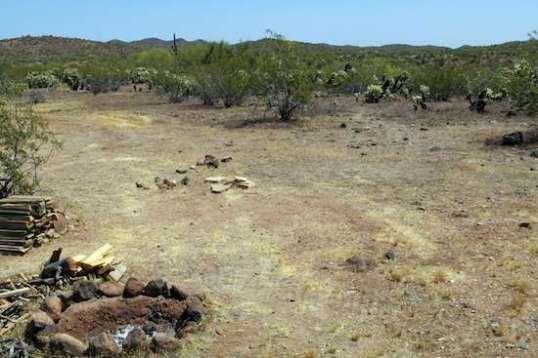 Well, I had scheduled my trashed campsite cleanup for today, since I had a trip to Glendale AZ yesterday, and I didn’t want anything to complicate that. Lo and behold, my earlier blog post about the messed-up campsite here on State Trust land apparently turned into a call to action for one long-time traveler and new reader, known here as Roger.

He saw the posted pictures and went out yesterday to have a look-see for himself. He noticed that the three large buckets had already been scrounged, but was appalled enough at the remainder, that he loaded what was left into his own pickup and took it into the waste recycler just outside of Wickenburg! Boom! Gone! While he was at it, he also picked up some cardboard in the main area, and some beer bottles left at the entrance by locals. He told me that tidying up the various sites he visits is a pretty common practice, since he and his bride appreciate having so many sites available to us at all. Kind of drives home to me the difference between yammering about a problem and just quietly taking care of it, doesn’t it? All thanks be to Roger!

6 thoughts on “Procrastination Pays Off!”