No need to search out the wildlife. The wildlife comes to you. The view from my office window two days after arriving.

The trip down toward Yuma from Quartzsite was notable because of the absence of bad. Nice drive, keep it in the lane, smooth pavement, no need to use the GPS, inviting scenery, things I passed that should be seen in detail later, and warmer temps. At one point, the scenery got downright attractive, with numerous small hills, lots of large trees and bushes, and plenty of less common forms of cacti. It made Quartzsite look pretty barren.

Oh, the Ford’s speed control flamed out for a second time, as one of two sensors thinks the brakes are on and refuses to engage. It eventually got over it like it did before. The first 2/3rds of the trip involved a strong headwind that dropped fuel mileage to 7.5 MPG. Dropping speed from 55 to 50 MPG popped it right up to 9 MPG. As the wind died down a bit and the elevation change had its effect, the entire trip averaged 11.2, which was unexpectedly good.

Some kinda balloon/dirigible at the northern edge of the Yuma Proving Grounds.

Once I was within a few miles of the turnoff for Imperial Dam, I noticed what looked like smog! Yuma is sizable, but not that big! Leakage from California, just a few miles west of here? Ultimately, no. It turned out to be dust raised by the windy conditions.

Once on the road toward the army base and Imperial Dam LTVA, it was all just a pleasant cruise on paved two-lane. My goal was simply to find the camphost station for the LTVA, then locate a suitable spot to set up camp. I began passing dirt entrances to named campsites, and wondered just how big this place was. In total, it’s big – really big. Most of it is far too rugged for vehicular camping, but what’s left is still boggling.

Found the camphost and asked about my own first priority, cellular signal strength. He seemed particularly uncertain, and guessed the southeast corner closest to the army base, since they have an antenna. He gave me a generalized map of the LTVA, which is basically a big loop with some branches. I took moment to fire up the Verizon cellular modem, and it seemed to lock in strongly and promptly right there! I decided to make a counterclockwise loop, look for the Christian Services Center that offers package reception and propane, and then scout for less crowded sites that still have a decent signal.

Campsites vary wildly, from ridgetop climbs to flat plains, waterfronts to deep gorges. Nearest the army base, the elevation was low and the campsites charming. Internet, with my modem, was zero.  After what seemed like a couple of hours, I decided that internet connectivity would just have to trump charm and seclusion, and picked an area just southwest of the heavily-occupied camphost cabin area. 2 bars of 4G Verizon. A WiFi amplifier antenna would open options a bit, but my modem can’t accept one, at least of the plug-in variety. I was sorely tempted to climb up a couple of steep ridges, but I know that it’s a mistake to descend again with full waste tanks in the camper. Fills the bathtub with greywater.

Parking in The Graveyard.

I circled around one good area that had plastic flowers stuck in the ground inside a campfire ring and then stopped in another on the other side of a 4-trailer encirclement, where the ground wasn’t nearly as level. A camper from the quad walked over and said, “You can park there over where you were before, where the yellow flower is. There was an elderly couple came up every year to stay there, but they both died last year. Somebody put those flowers there.” He smiled a little and added, “You can stay over there in the graveyard if you want.”

Well, it was exceptionally level there. It also helped that this had been someone’s fav spot, and that they weren’t actually buried there. I’d read that some folks return here year after year and camp in the same spot. They get to know each other. It must really louse up their sense of entitlement when some goof shows up and steals their heritage. Since it was approaching sunset, I didn’t have time to do that to anyone, and had to settle for desecrating a memorial. There was even a little solar sidewalk lamp beside the flower. “Somebody” indeed.

In Memoriam… the solar lamp is hard to see, but it’s right next to the flowers on the left side.

And as the sun sets low in the west, we say a fond farewell from Imperial Dam LTVA… 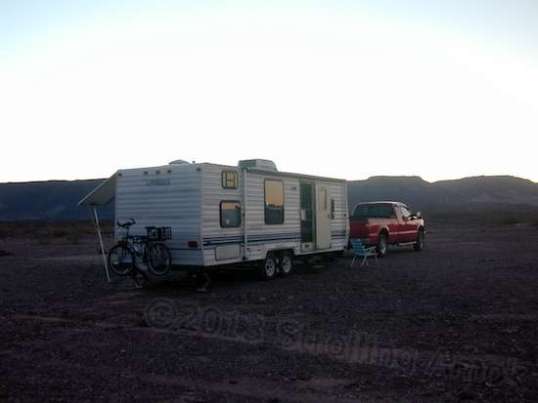 Okay, now this is REALLY sunset.

I actually waited until sunset to hook up the panels in order to help the electrical connectors last longer.

The quad of RVs next door. One has a wind generator that makes sounds like a thousand grasshoppers flying. A couple of others use ground-based solar panels anchored with big rocks and fuel cans.

As dark set in, the wind gained speed for a stout overnight blow as a cool front came in.