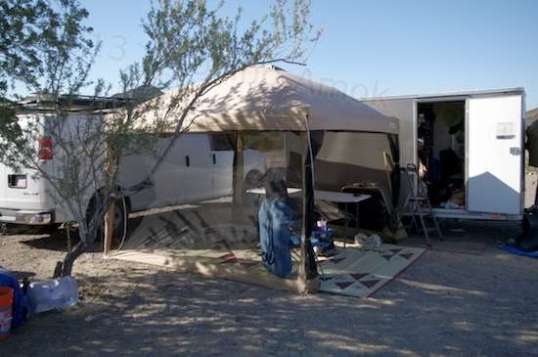 Intrepid vandweller Swankie Wheels got into nesting mode the other day and unpacked a canopy, screens, table, and chairs. She set it all up and added an outdoor rug to keep dust down, and had the perfect place to work on the rocks that she likes to rework and polish. Add a little folding table for a laptop, and it’s home. Another vandweller was in for a few days too, and had

set up camp close by. 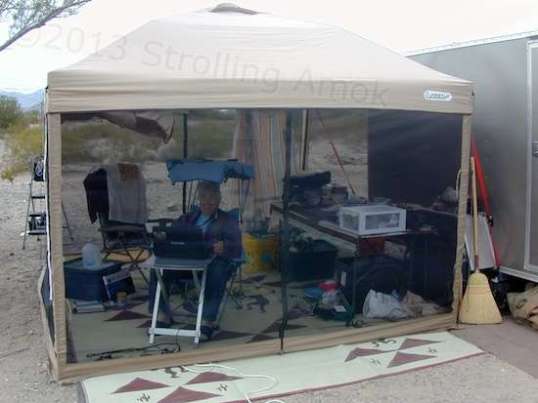 The Swankmeister in her lair.

Alas, it was not to be. For the first time I’d ever seen them, two BLM rangers came by and stuck red tickets on each van. The dreaded red ticket! Actually, it’s a demand to move the vehicle to within 500 feet of a porta-potty or vault toilet. Technically, any vehicle not having at least a ten-gallon waste tank is not considered “self-contained” by the BLM, and they must stay in certain areas when within the Long Term Visitor Areas. Both vans have workable facilities, but neither can meet that 10-gallon minimum.

Why didn’t they just camp down there first? Easy! I assured them that I hadn’t seen a single ranger in the six months of my last season here, and what’s the point of spending taxpayer money on being the Potty Police? It’s not like these two women were hitting the bushes. It’s all properly disposed of. Second, Swankie wasn’t thrilled with a couple of the campers in the “proper area”. Their camp gave her an uneasy feeling, and it’s a good idea to go with the flow in that regard. I wasn’t that impressed myself. Still, I’m surprised that my own “creepy campsite factor” isn’t at least a match. I suspect the “filth factor” distracts attention away from it. The latter kept them well over a football field away. Could be they noticed the dust blowing OUT the door each time I opened it! 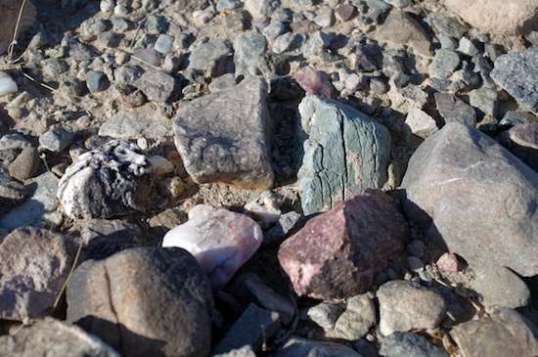 Advice: don’t camp near a rockhound. You’ll find yourself looking down, searching for interesting rocks even though you don’t want them for anything.

Nonetheless, Swankie had to break camp, pack up, and move 1/2-mile further down – just before a 3-day rainstorm was due to hit. And I mean minutes before.  It’s been raining since, because a storm off the California coast has stalled in position. So, she hasn’t been able to set up camp at her new, slightly creepy site. She’s simply huddling in her van, toiling away on artwork in this rainy 50-degree weather. Once the rain is over, she’ll be able to search for a permanent site. All the “best” areas offer surrounding bushes for a little more privacy, but those also tend to be in the low areas – not a good idea in a prolonged rain like this. 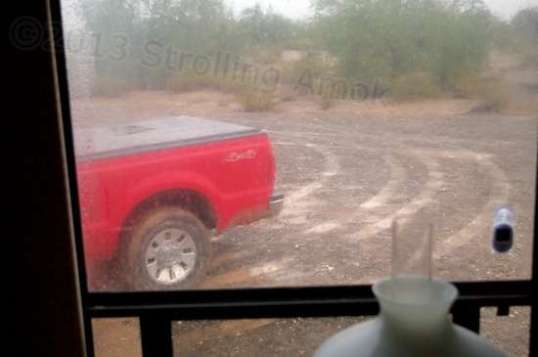 A shot out the wet dining area window early on Day 2 shows the same old thing. The gravel pad I’m on is raised, but still pretty mushy. 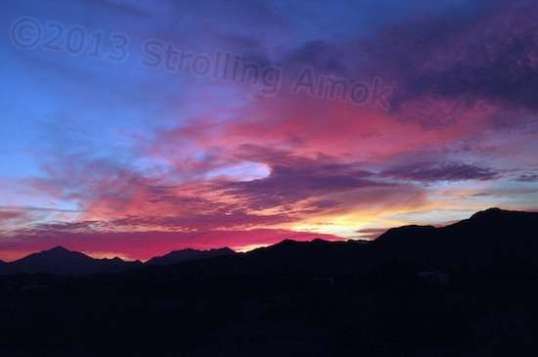 And the evening before the storm came in, this was what things looked like. I prefer this, but Arizona hadn’t seen rain in months, so…