In Search of a Haircut

My Internet search for a barbershop in Quartzsite turned up just one entry, a shop next to my laundromat. The next closest was 15 miles away. Unfortunately, this barber shop has vacated, since its owner has retired.

The guy who ran the laundromat is a friendly and very helpful guy, and told me that three exist. There was a cheapest one next to another laundromat in town, but he recommended one that was on my way back the trailer. 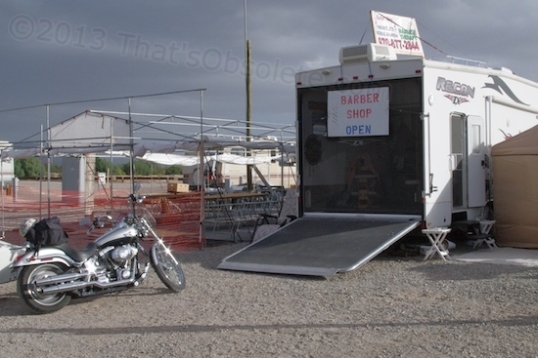 That turned out to be Donna, who works out of a converted Jayco Recon ZX toy hauler (a travel trailer built to include space for motorcycles or ATVs in the rear). In her rig, this space was now her barber shop and massage therapy office. All she has to do to open for business is to pull down the big loading ramp and the huge screen that can enclose the rear opening. An 8′ x 8′ window is not a bad view while you’re getting your hair trimmed, I can tell you.

Her choice of a toy hauler is appropriate. She likes to ride her Harley

Davidson around. She told me that she had just returned from a trip to the Portland, Oregon area, finally victorious in her quest to locate a Honda 2000S convertible sports car (now out of production). Her new prize, a silvery blue version, was parked just outside the trailer. To my naive surprise, she’d had to personally scour the Southern states as well as Western to find an example that had not been competitively raced. I had known they were exceptionally quick from having driven a new one years ago, but it seems that the model has also become very popular in amateur road racing. That poses a problem for anyone wanting to find one that hasn’t been abused on the track. She hadn’t known this at first, but slowly picked up many signs of racing use as she inspected car after car.

Turns out she stays in Quartzsite for all but the torrid summers, and she regaled me with the history of Quartzsite as it relates to winter vacationers. It’s a far cry from its past popularity, she told me, and gave me the basic reasons she’d witnessed over the many years she’s been here. Executive summary: the local government has been increasingly trying to cash in on the rush, at the expense of the many, many small businesses that want to set up shop, and even those year-round businesses that try to survive the void of summer.

By the way, the haircut was very well done, and I look considerably less scary that I did earlier today. Considering that I’m so used to many years of going to my regular barber shop in Woodstock, Illinois, stepping into a trailer with a view was an unusual experience. It was a good one, though! I think I like it! 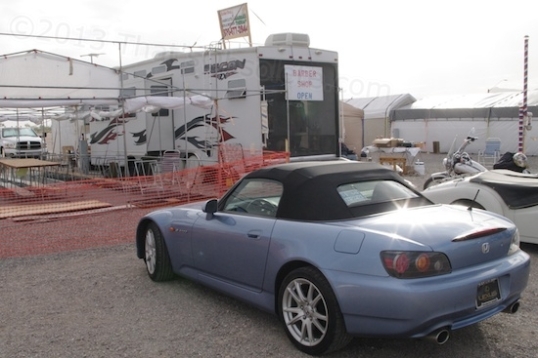 This one is Donna herself, outside her shop near the end of her day.

She also has an early Triumph sports car that’s been in storage for 35 years. It’s for sale for a and looks fine body-wise. I will be letting Yves Boode of Vintage Sports Car in Woodstock know about this. I assume that the fuel cost to trailer this thing over long distances is a problem, but it’s still worth knowing about. He goes to Texas now and then, so…

Update: Oops. That’s $15,000. she has a standing offer for 10K from some outfit, and was going for more, which Yves said was unlikely. He was correct. Over the next several months, no takers.