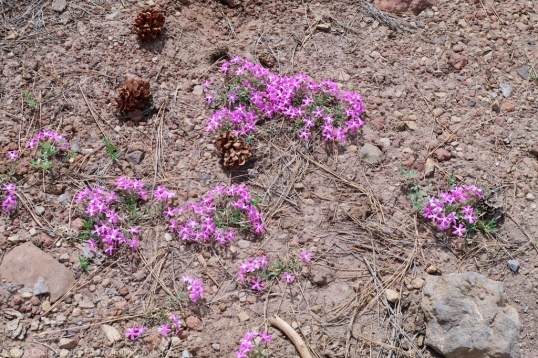 Flowers are not in abundance here, so discovering some is a moment to appreciate. You can click on any of these photos for a larger view.

I moved camp. One reason was wondering what else could be workable “on top”, which was another 200′ higher in elevation. The other reason was noise. Despite the considerable distances between campsites, or perhaps because of it, locals love to come here and turn up their favorite music as loudly as their equipment supports, day and night, and of course turn their dogs loose. A recent report of attempted theft made me consider my deployed solar ground panels. Perhaps it was time to go back on mission and hunt up an additional measure of solitude. 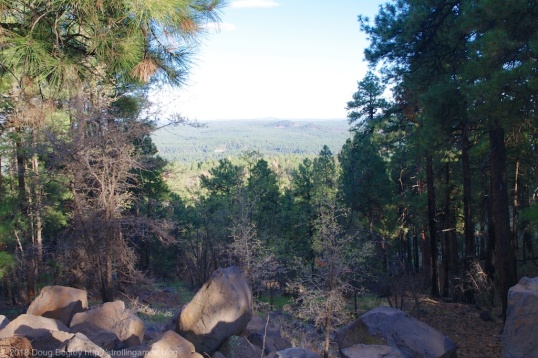 Gaps in the trees during the climb allow quite a view.

Morbid curiosity had its hand in, once I made a start at pedal-touring the road above the switchbacks on NF-535. Up top is a different story entirely. I decided to pack up the camper and crawl all camping-approved areas as noted on the MVUM. So I idled down a branch at a water hole, which they refer to as a tank out here. 9018H goes straight west and cuts through an area where the forest shows signs of having been deliberately thinned out. The road itself is plain dirt, deeply rutted for very long spans, and occasionally troubled by patches of retained water that forms mudpits. Fortunately, the mudpits can be skirted. Oddly, former campsites abound within the prohibited quarter mile of the tank. Further west, they are a real rarity. I found three along the entire “legal” run, all of them on open ground. 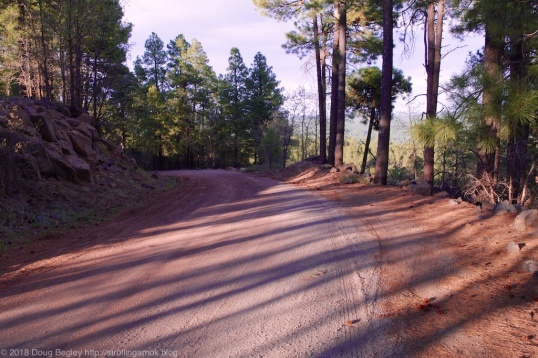 A look back the way I came.

There’s a point on my solitude scale at which the factors contributing to it become a little too strong for my taste. 9018H has that excess, in my book. Virtually the entire drive is an exercise on keeping tires above the deep ruts, which is much like driving along railroad tracks. The occasional mudpits are avoidable, but only just, and this is over a week past the last rain. One more small dose would expand their sizes enough to become a challenge, something that’s less than desirable when supplies are running low. The “feel” of 9018H struck me as the barrenness of a somewhat alien landscape. It was more weird and slightly unsettling than anything else, so after I hit the end of the “camping” stretch, I doubled back and got back on 535, which is occasionally graded and graveled. I did mentally note one that I favored over the others, just in case NF-535 turned out to be a bust. 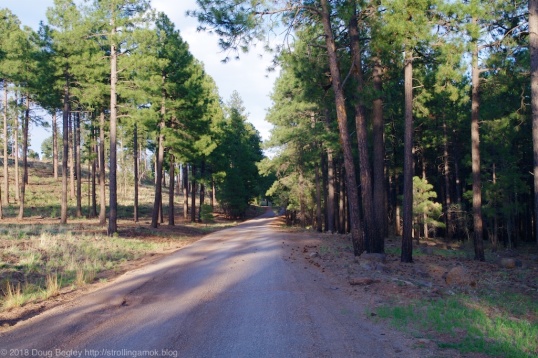 If you include tent sites, I count more than half a dozen campsites available, just one of which was occupied. Solar is not a meaningful option at most of these, and it remains to be seen whether the one I chose will prove workable. But the sites are spread out nicely, are in among towering pines, and are far from identical. Unlike the sites lower down, the drop from the roadway to enter most of them may challenge the overhang of a small motorhome. Some are more stealthy than others, making them more difficult to pick out from the road, and some are just a short stub where you can park among the trees. 535 itself is easy-peasy, but the campsites vary as to rig suitability. They are all likely to be quiet however, and weekday traffic is very light. Cellular signals are probably similar to where I was, but my current site is in a depression, earning it just two bars out of four. I find that getting a signal any faster than that needed to get email problematic here, but part of that is because I have used all my “fast” monthly signal, so Verizon shuffles me to the very back of the bus when demands on their system start to build. If you’re into nightly campfires, forget about it. It’s apparently been a dry winter here, and fire regs have been screwed down tight, especially at the upcoming expo camping areas. 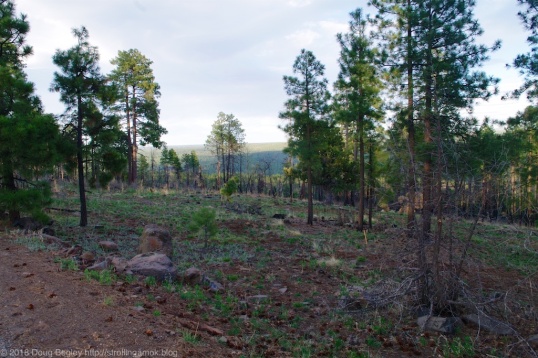 Some areas have been REALLY thinned out.

Some signed trails up here are not shown on the MVUM any more, which means that they are no longer approved for motor travel of any kind. I briefly tried an approved one called 535A, but it was more deeply rutted than 9018H, and the potential rewards for continuing along it felt slim. I had already passed by adequate solitude. Some exploration with the e-bike may be in order, but only if it proves practical to do along such trails. You tend to find out pretty quickly. Also, wind leading to nippy temperatures is forecast for the next three days, and I’ll be curious to find out how much gets through at ground level, though I’ll be doing errands in Flagstaff during the worst of it. 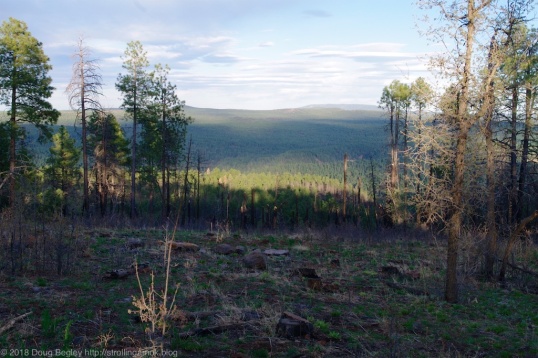 At the top of the climb is where the views are best. 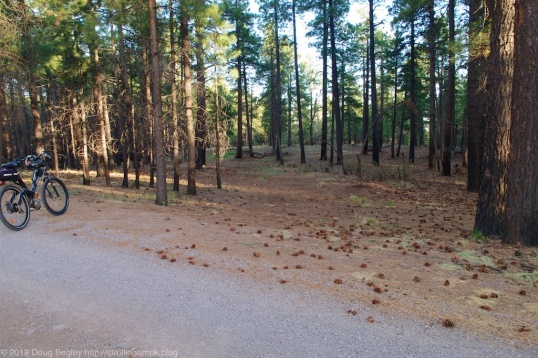 Here’s the smallest campsite I found, getting cozy in amongst the trees. 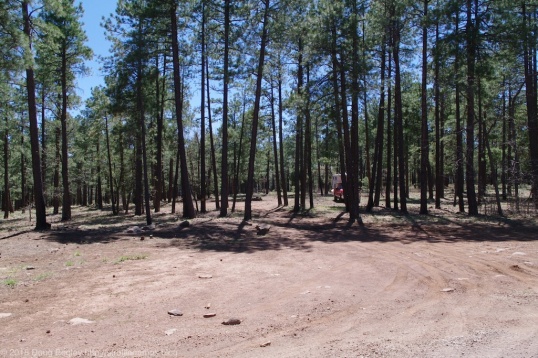 As you can guess, this is my new campsite, as viewed from 535. 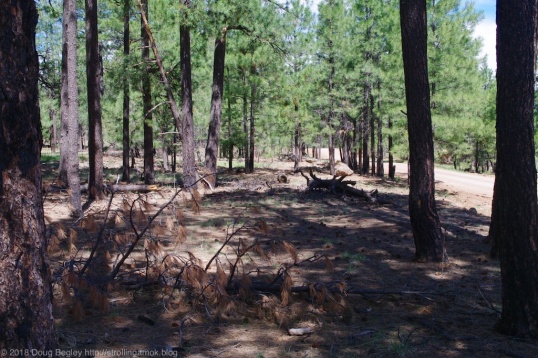 With current highs in the mid-80s for now, interesting hikes are best done in the cool shade, rather than on the road. 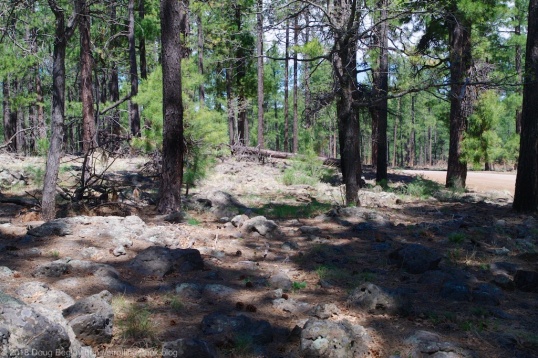 I don’t have a walking stick just for decoration. If you like rocks, boulders, pine trees and a thick carpet of pine needles, this place is special. Pottering about up here is a delight.

5 thoughts on “On Second Thought…”