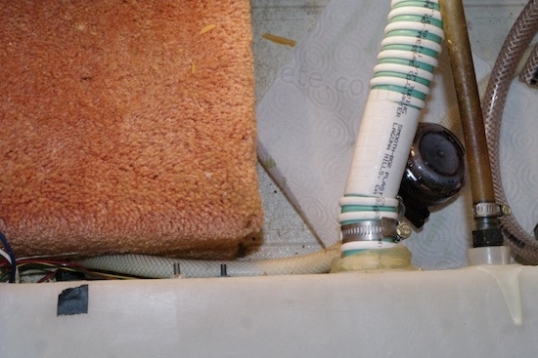 The black object on the right is the new mesh water filter, while the tubing supplying it is trapped on the left.

Lest you think each day here is a sublime rest in the warm sun, this morning did start well, with me slurping hot coffee while I set the iMac up again and cleaned up the data restoration, then set it to work doing what it had been when its hard drive collapsed. With tonight’s freezing cold coming in, I decided to have the portable propane tank refilled since the gauge my daughter gave me was signalling impending doom. Since I would be using the truck to do that errand, it made sense to make a trip to the dump station, too.

Easy enough, or so I thought. Actually, not knowing the exact fresh and waste water capacities of of any of the camper’s tanks, I explored new territory and pumped a fourth waste charge from the camper into the truck-mounted Tankmin, somewhere around 13 gallons. I’ve been playing it conservative so far, making a run to the waste dump after three charges: 20, 13 & 20 gallons. I was estimating the Tankmin to already be holding about 53 gallons when I started the fourth charge. The Tankmin is rated at 67 gallons for waste, or about 65 gallons usable capacity real-world. So yes, my going for four was… overly ambitious. After awhile,

the Tankmin’s tall vent tube spouted like Moby Dick, only it wasn’t air flying out.

Fortunately, I was watching it and quickly cut power to the macerator. There was nothing to do but close the vents and valves, leave the waste hose in place and pile it into the truck bed, and head for the dump station. It was easy to dump the waste tank and rinse the affected areas off, and head off to buy propane. Thing was, the camper’s tanks weren’t completely empty, so I had to complete the job, head for the dump station again, do a proper waste tank rinse, and fill up with drinking water.

Looks like I’ll go back to three fresh water refills before I have to dump, some 53 gallons plus error in estimating water level, and whatever I add personally via purchased juices and sodas. No adventure there. It would be nice to add at least a waste tank monitor readout to the Tankmin, and replace the camper’s ailing tank monitors with better ones of a more reliable type, like SeeView. But this works for now.

All that took awhile (the fresh water refill is slow), but when I got back I had time to install a mesh water filter in the line running from the fresh water tank to the water pump. Keeps grit out of the water pump, decreasing running/pressure problems. I had picked up some new FDA-certified tubing in Phoenix and was going to replace the old tube while I was at it, if the existing tube looked to be badly aged. The tank is enclosed under one of the dinette benches, so it’s simply a matter of pulling off the cushions and seat platform to get at the tubing, then pulling  off the bed mattress and its platform to get at the water pump end of it. I cut through the tubing at an appropriate place to add the mesh filter, and found that the tubing had aged and was too embrittled to go easily over the filter barbs. Time to replace it and do the job right!

I was at this point that I discovered the limitations of Gulf Stream’s engineering work, such as one may choose to call it. The worm clamp on the hose entering the tank was not accessible, being tightly trapped between the tank and the carpeted wheelwell. Looking at the clamp, it was plain that the hose had been attached and secured before the tank was even dropped in. The fitting placement was odd, because there was plenty of access room at tank center or right. For some reason, the tank’s hose fitting was located in exactly the worst possible place. Even better, the only way to move or remove the water tank was to completely tear out the entire bench structure. That involved removing a mass of screws going into the floor and two walls. All of that to replace a piece of flex hose.

Actually, it’s not considered bad engineering if the trailer is not designed or expected to last more than a decade, or in this case longer than it takes to age a piece of vinyl hose. With that outlook, replacing the hose should never be needed, because the trailer is viewed as unlikely to outlast it. This is not an engineering problem – it’s a management problem. So Gulf Stream buys the cheaper, in-stock tanks with badly-located fittings and traps them because it’s unlikely that any service will be needed within the expected lifespan of the camper – a few years. Not much of a testimony to that company’s vision of its own products. But then, the words “durability” and “long-lasting” tend only to be used in the very few all-aluminum truck campers and toy hauler trailers out there. Virtually everything else boasts of comfort, luxury, and amenities. That’s it. Guess what the only two RV types that are selling in this bad economy are? Everyone else is adding features while they cheapen structure and component quality to pay for them. This isn’t actually my own perception – I haven’t reviewed RVs year after year. It’s the frequent opinion of people who re-enter the RV market every few years.

So, water tank empty and sunset looming, I wasn’t about to tackle something not engineered to be disassembled. I wet each filter barb with a touch of dish washing detergent and fought them into the brittle tube ends. Clamped up and tank filled, they don’t leak a drop – today.